An Encounter with a Taxi Driver in Tokyo

Posted on November 28, 2015 by Lynda Philippsen

For the past while Japanese media has addressed topics related to the upcoming Tokyo Olympics in 2020. Once in awhile I see an article discussing what might be improved prior to foreign visitors’ arrival. Even after numerous visits and familiarity with the way things are done in Japan, during my travels I often experience things that hordes of Olympic athletes, dignitaries, staff and fans might find frustrating.

First, how about scrapping the surcharge for calling a taxi to your hotel in Tokyo? This year, for the first time ever (since 1998) I had to pay 400 yen in order to request a taxi in my name. It used to be standard practice. Now (ostensibly to save me money) reception staff wanted me to hail one on the street. Guess how many can whistle right by and (Oopsie!) not see a non-Japanese woman “waving to a friend”? And who wants to stand in the rain getting soaked and blown about after dressing for dinner?

Plus, it wouldn’t hurt to give taxi drivers some professional development and training. (Of course, this was one man on one night and doesn’t reflect all taxi drivers in Tokyo. I realize that.)

I could not believe that the driver who showed up in Asakusabashi on a rainy night did not know the Gate Hotel Kaminarimon in Asakusa when asked in Japanese. Was he having me on? Sure, at almost 3 kilometers it was a short fare, but a well-dressed woman on a rainy night? Where was his highly touted omotenashi spirit?

Even without understanding the words hotel or gate, Kaminarimon is one of the best known landmarks in the city. It’s an imposing edifice with a huge lantern marking the avenue leading to Sensoji, one of Tokyo’s best known temples. 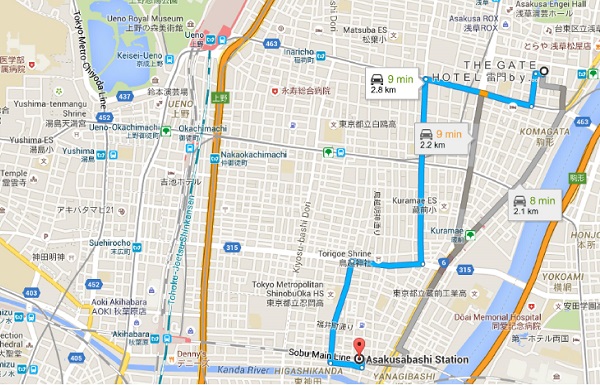 Route from Station to Hotel on Google Maps

After I politely and slowly stated my destination with a proper onegaishimasu (if you would be so kind), he opened my passenger door and with a curt wakarinai (I don’t understand) indicated for me to get out. As I’d spent 20 minutes waiting for him to get to the hotel in the first place, I wasn’t letting him off into the night that easily. Besides, I had a reservation.

I wrote out the words for him to look at. Pronounced hotel as hoteru. Apologized for my lousy Japanese, and tried to remain charming and sweet while hanging on to my last shreds of patience.

As I more or less knew where it had to be, I thought I’d change tactics. Do you know Kaminarimon Sensoji in Asakusa? I asked in Japanese. Hai. Yes he knew. Ah so desu ne? (Is that so?) You understand! Thank you. Please take me to Kaminarimon Sensoji if you would be so kind. That seemed to satisfy him and off we went. In a few minutes we pulled up to the taxi stand. He seemed a little less grumpy when he asked if this was okay. Yes, thank you. It’s great.Thank you very much, I said in Japanese. I paid him, wished him a good evening and got out of the cab.

I knew could figure out the rest. It took all of three seconds to see the glowing dining room windows facing east toward Tokyo SkyTree on the upper floor from the sidewalk in front of Kaminarimon.

Unfortunately, I had to work like stink to get him to figure out what should have been innate knowledge on his part.  I could do that because I was familiar with the area, I knew where I wanted to go, and given provocation can be incredibly tenacious. The average Olympic visitors may not have that skill set.

Sometimes, for no sensible reason, the simplest wishes can be near impossible to achieve in Japan. This was one of those times.