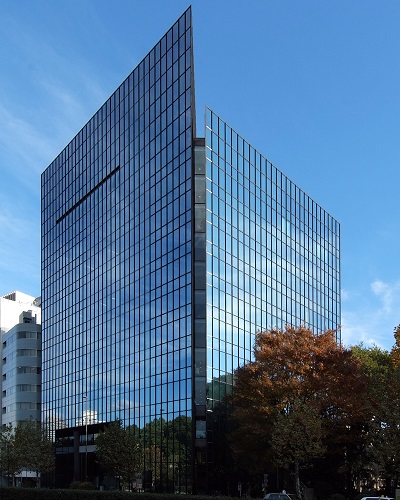 On a sunny, late-September morning I enter the teaching room of the Tokyo Sogetsu Headquarters. After registration for the International Ikebana Class given every Monday morning except on holidays, I am introduced to Master Instructor, Suikei Sakaguch. Then we are directed to the bank of flowers and branches from which we are to choose our materials.

I get to choose? Joy! I expected a basic lesson with the materials already decided. I ask for Sakaguch-sensei’s guidance. As a beginner, not knowing what I’m getting into and presented with numerous options, I want to be certain that the materials I’m attracted to are appropriate for the lesson. After that, it’s entirely up to me.

My instincts lead me to a monochromatic palette of pom-pom chrysanthemums and tangled willow-like branches. The chrysanthemums reflect the season which is past the equinox and officially autumn; however, I choose green ones rather than traditional autumnal shades because Tokyo is still verdant. As a West Coast Canadian, to me the somewhat sticky temperature still feels summer-like. But Tokyo nights are cool and lengthening. The tangled branches foreshadow the soon to be bare trees. 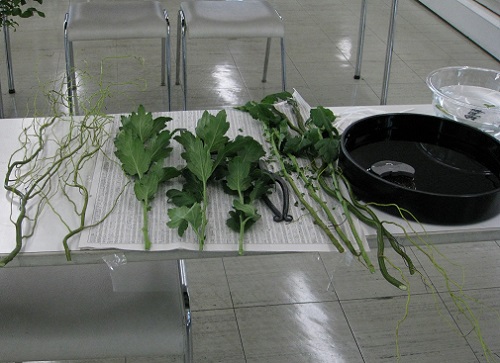 Preparation of the materials

In Japan and the Culture of the Four Seasons, Shincho Professor of Literature and Culture at Columbia University Haruo Shirane explicates the way Japanese aesthetics in literature and the arts reflect the present season and hint at the one to come. For that reason I also chose to set my arrangement in a black rather than white suiban (container) to signal winter’s dark nights and black ponds. 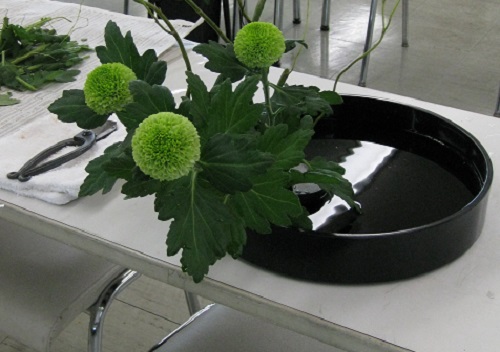 I work mindfully under the tutelage of Sakaguch-sensei and her assistant, often stopping to ascertain that my angles are correct. It might seem obsessive or hesitant to a casual observer; however, I’d rather not pull the thing apart and start again.

Joseph Campbell urged people to follow their bliss.  Part way into the lesson I pause to gaze out the window to savour the view of Tokyo below. That’s when it hits. With a profound sense of surprise I realize how serenely, divinely and lusciously happy I am. This is bliss!

How did I find this place? By serendipity. The year before I had attended the Vancouver Ikebana Association’s annual show at Oakridge as I regularly do. I attend as many of their shows as possible as a regular infusion of astonishing beauty is akin to vitamin shots for a creative mind.

That day I’d barely entered and looked over the first few arrangements when I was approached by a Japanese woman who asked me which was my favourite. I demurred. I’d only seen a few and each was special for distinct reasons. This sparked a long conversation. I learned that I was chatting with Mrs. Sally Yukawa a teacher with the Sogetsu School. When I mentioned that I was planning a trip to Japan, she encouraged me to take an international class at the Tokyo Sogetsu Headquarters. (Finding and registering for that was as simple as a few clicks on the internet).

Now, almost finished my design, I again seek the teacher’s advice. My instincts tell me I need to cull one or two of the smallest branches. However, something snipped can’t be replaced. When Sakaguch-sensei sits down to examine and critique my arrangement she says, “First, before I answer your question,” she said, “I want to tell you it is very beautiful.” 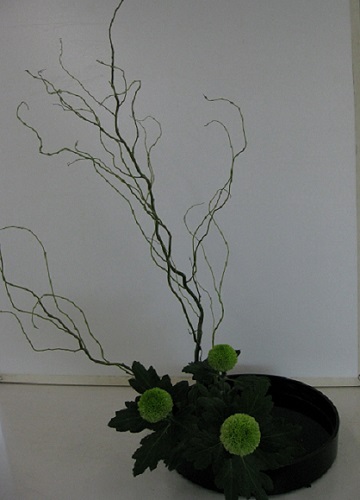 Be still my beating heart! As a beginner I’d anticipated criticism—the various ways I’d fallen short of an ideal. But no, I’d managed to achieve something “very beautiful.” Bliss intensified.

When I got back to Vancouver I called Mrs. Yukawa to thank her for her suggestion. It had made my time in Japan incredibly special as well as joyful. That’s when she invited me to attend her monthly class. But that’s another story.