According to ancient tradition, Ise Jingu in Ise city located in Mie prefecture is the seat of Amaterasu-omikami (goddess of the sun and the universe). Along with other relics, her sacred mirror is enshrined here. 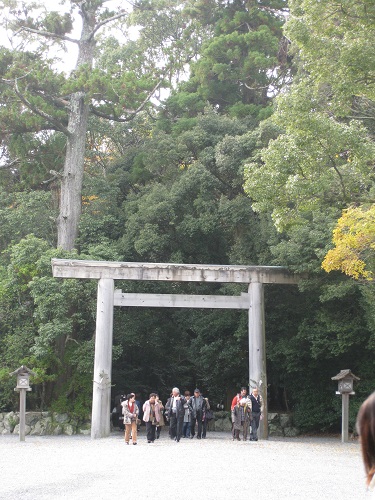 Built in a purely Japanese architectural style, the Ise shrines are also the seat of Japan’s Imperial dynasty. The Emperor is deemed to be a direct descendant of the goddess and is also a deity (or was, until 20th century post-war occupiers had him denounce that notion as part of the democratization of Japan). Even though the Showa Emperor known as Hirohito officially declared his humanity in 1946, the Imperial Family remains closely tied to Ise Jingu, the nation’s ultimate seat of Shinto.

Situated in a dense coastal forest in separate locations, more than 100 auxiliary shrines and outbuildings make up the Geku and Naiku (Outer and Inner) Shrines of Ise Jingu. These house numerous sacred objects and are part of more than 1000 rituals and festivals conducted throughout the year.

Unable to speak or read Japanese and travelling alone, I’ve come here by train from Nagoya unaware that there is a matsuri (festival) today. Though the train was not especially crowded, the roads and pathways are packed with buses, cars and people. I walk to Geku (the outer shrine) from the train station, but choose a taxi to get me to Naiku which is some distance away.

The driver is concerned and apologetic. He can’t drive faster, and the fare will be high because of the traffic jam. I reassure him. No problem. Never mind. It’s drizzling at the moment. I’m more comfortable in the company of a considerate man in a warm car doing his best to chat with me than I would be crammed into a bus. Some comforts are worth the price.

Speaking of Ise Jingu, the 12th century waka poet and Buddhist priest known as Saigyo wrote: I don’t know what resides here, but tears fall in appreciation for it.  なにごとのおはしますかは知らねども かたじけなさに涙こぼるる

Other famous people—Nobel laureates, historians and writers—have remarked on Ise Jingu’s palpable power as well. I too feel that neck-prickling force which prompts spontaneous tears as I shuffle up the hillside toward the stone steps approaching the Inner Shrine.

I am reminded of fragments from Rumi: … something in my chest, where nothing much happens now, moves as in sleep. (Trans. Coleman Barks)

Is it some animistic energy that we modern inhabitants of this planet (disinclined as we are to belief or ancient ways of understanding the world in favour of science) seldom notice and no longer tap into? Or ley lines? Or might it be the mildly intoxicating effect of the ancient trees which pour their oxygen over us like a natural hyperbaric chamber? 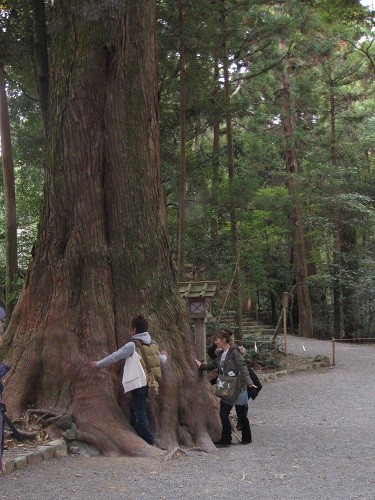 Then again, perhaps mine are tears of recognition. This old-growth forest is so like the stately trees of West Coast British Columbia–more than any others I have seen so far. The familiar incense of fog and drizzle and sea mingled with the fragrance of the trees reminds me of Miracle Beach Provincial Park within a few miles of where I was born and raised. If I were to close my eyes I might not realize I am far away. And maybe I’m not; perhaps I’m home. Or as close as I’ll ever be. 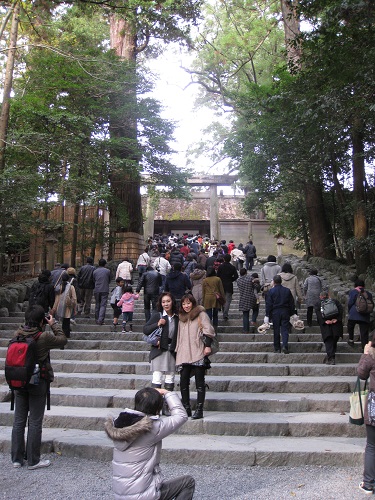 Strangely, in spite of being pressed together with many hundreds slowly snaking forward, the silence of the forest prevails. Muted voices are lost in the wind. If I close my eyes, only footfall—the constant crunch of crushed gravel ubiquitous in temples and shrines around the nation—indicates that others share this pathway.

Though public access to the shrine itself is prohibited, as I mount the steps to its curtained entrance—as close as we are permitted to come to the real deal—the wind which has moaned in the stately trees all afternoon flips the curtain high into the air. 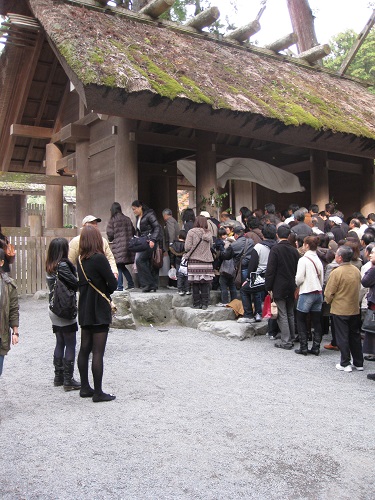 Ah-ha! Another trick of the gods. Because they need our devotion to survive, they draw us in with a tease. They toy with our unrequited longings and let us think that we might glimpse more. But no. Nothing but barriers in sight. Given the wind, I saw it coming. I was not surprised. Cynicism verified is a happier state than unrequited hope. I can live with that.

Photographer Nakano Haruo’s photo-log of Ise Jingu quite surpasses my own effort. View his work here.

In 2013 Ise Jingu was rebuilt as it is every 20 years. This underscores the evanescence of all things, keeps the architectural craftsmanship alive each generation, re-affirms the status of the Imperial dynasty and renews the energy of the enshrined goddess. Read more about the event and view photos here.

This entry was posted in Japan, Travel & Culture and tagged Grand Shrine of Ise, Ise Jingu. Bookmark the permalink.