Small, red-brown deer which appear tame and approachable freely roam Itsukushima (which everyone refers to as Miyajima meaning Shrine Island). However, signs warn visitors that they are not pets but wild animals. The warnings are common sense: Don’t tease them and don’t get too close as they can cause injury. Litter and plastic are bad for their digestive systems. Above all, don’t feed them as they stop eating the grasses they are meant to eat.

Of course, people (being so much smarter than good advice and disinclined to find anything cute harmful) collude to sell and purchase senbei (crackers) to feed the deer. Even the Japanese (who we are led to believe always dutifully follow the rules) disregard the warnings. 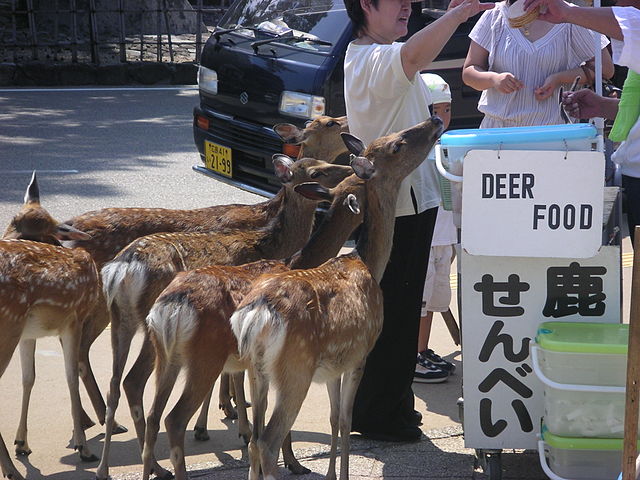 I give the creatures a wide berth. Like cranky toddlers, when not instantly appeased the deer can become quite nasty as a friend of mine learned at Nara. When she didn’t get her crackers out of the packet fast enough the ungrateful creature chomped her hard on the kneecap. The nasty purple bruise lasted and caused her to limp for weeks.

Shinto considers deer as sacred emissaries of the gods; therefore, when my friend instinctively yelped and smacked the offender on the nose (as she was wont to do when her Great Dane got out of hand) the folks in the street responded with a collective gasp of horror.

I am wary of imperious gods and their nuisance trickster emissaries. They behave similarly whatever the mythology or creed and rarely do us hapless mortals any good.

Frankly, I prefer both wild animals and deities to remain in their own realms where they belong. Why should they pester us for handouts or adulation—especially in such an unfair, one-sided exchange—or bite us when we don’t live up to expectations? Let me revere their presence and majesty from a safe distance.