Posted on February 10, 2012 by Lynda Philippsen

Because of its slower pace and older character I chose to stay in Taito, a working-class neighbourhood around Asakusa Sensoji, Tokyo’s oldest temple sacred to Bodhisattva Kannon, goddess of mercy.

From my hotel balcony I see the spire of Gojyunotou, Sensoji’s 5-storied pagoda, dwarfed between residential and commercial buildings. To its left the newest addition to the skyline, Tokyo Sky Tree ascends.

Joseph Campbell (in Transformations of Myth Through Time) suggests that people create structures which concretize the primary values of their society. Such structures, placed highest or rising tallest on the skyline, symbolize the culture which venerates them. Thus mountains, fortresses, castles, temples, cathedrals and bank towers have each supplanted the other over time. 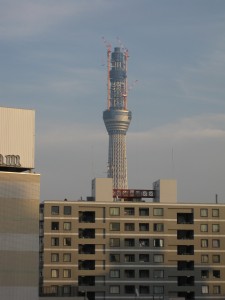 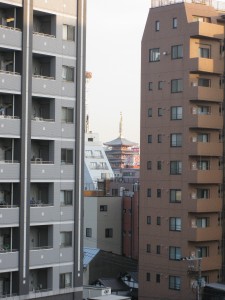 This tower of instant-babble also contains a four-level, town-with-a-tower development. Touted as a community where residents and visitors will meet, it’s tempting to speculate. When they do—eyes to screens and checking in digitally—exactly how will they engage?

Modes of communication and engagement are mutable, always have been. Though alarming to some when new, looking back over the historical arc all change seems predictable and inevitable. Blogging for The New York Times, Douglas Coupland observes: I note the moment you hear somebody say something’s over, it usually means something massive is about to happen.

Analog communication is over. Sky Tree presides over the digital show. Already we are wondering: What next?

And the venerable long-supplanted goddess, what might she be thinking? More apps, faster, more insistent interruptions and louder, larger-than-life reality TV? Mercy.