One of the immediately impressive aspects of rail travel in Japan is the cleanliness the cars. Accustomed to my local SkyTrain system (in which the floors are often grubby after spills and people thoughtlessly litter) I appreciate the startling difference.

Though a high level of cleanliness is also the norm for slower local and medium speed express trains, nowhere is this standard more apparent than on Japan Railway’s Shinkansen (nicknamed the Bullet Train) system. First, specially designed train-washing stations keep trains looking as pristine outside as in. Second, even though nearly 400,000 passengers travel daily the via the JR Central Japan Shinkansen system alone (the one I’m using), there’s not a speck of dirt or litter visible anywhere—ever.

How is this possible? Well-trained and conscientious passengers, of course, help a great deal. Recycling has been part of Japanese social and eco-consciousness since kindergarten as students separate the various parts of their school lunches on a daily basis.

At home, parents must sort trash in clear bags for curbside pickup. So it’s easy to understand that people would naturally continue to properly dispose of empty food or drink containers or newspapers in the proper receptacles on board trains and station platforms. It is habit. 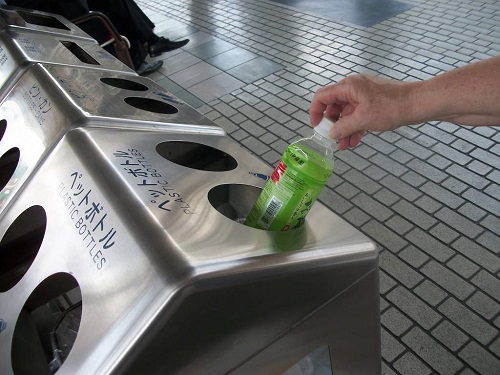 However, a huge credit goes to TESSEI, JR’s train-servicing company. It employs teams of uniformed cleaners who board the trains between 120 and 170 times a day. Passengers will often see them standing at attention on the platform like soldiers as they await an incoming train. On its arrival they bow to greet it in unison. 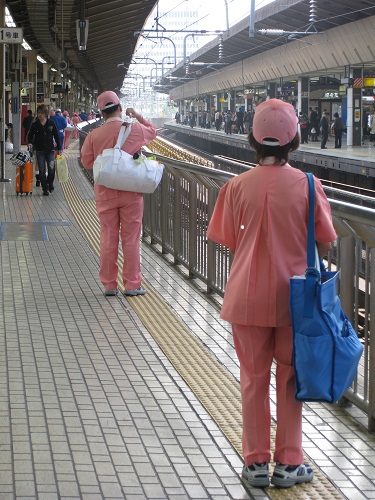 As passengers leave the cars, cleaning team members stand outside the doors with bags to collect any disposable items being carried off the train. They politely thank each one. Once all passengers have disembarked the cleaners dash in.

Each member has a list of duties and exactly seven minutes to complete the assigned tasks. These include cleaning all trays, adjusting the blinds, turning all seats to face forward, sweeping up refuse, and replacing any soiled head covers. Some members attend to the washrooms and remove refuse from disposal bins located between the cars. When they are finished, they disembark and bow again in unison.

At one time this was perceived as a lowly and thankless job done mostly by middle-aged women.  Though the age and gender of the personnel has not changed, over time the service has been re-branded. The employees’ contribution to the railway is solicited, valued and rewarded with recognition. Consequently, today’s teams take great pride in keeping JR’s Shinkansen trains in top condition.

Called “Shinkansen Theatre,” the service has become a hospitality icon. Cleaners execute their top-notch service with high drama in order to create a powerful impression for customers, hence the uniforms, the bowing, the impressive speed and thoroughness of the cleaning. Described as a “seven-minute miracle,” TESSEI’s business model and its personnel’s performance have attracted highly-deserved global attention.

Watching these Shinkansen cleaning-bullets in action—and timing them to see whether the seven-minute bit is true—creates a little show business for the passengers who otherwise might chafe at having to wait those seven extra minutes before boarding.