On March 15, 2016, a large number of Japanese, Japanese Canadians, and businesses or groups affiliated with that community bid farewell to Vancouver’s Consul General Seiji and Mrs. Yasuko Okada in Burnaby’s Nikkei Place. As their three-year appointment has ended, the Okadas will return to Tokyo to new duties. 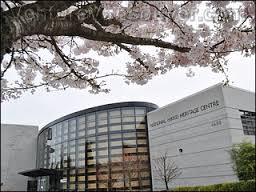 It was a bitter-sweet evening of photos, speeches, sake, food, music and some tears. The Okadas will be sorely missed.

As a non-Japanese Canadian (but a grandchild of immigrants) I marvelled at the event. I couldn’t help but reflect on the bitter history of Japanese Canadians in this country. Some people present had lived through the loss of their fundamental rights as Canadian citizens, experienced World War II internment, suffered the full force of racial prejudice, and experienced horrific losses.

I wondered as I listened whether any of them might have imagined  the present vibrant community, or the splendor of the Nikkei facility, its museum, gardens, seniors’ housing and avenue of sakura trees in full bloom on this day, some 70 years after WWII. I suspect not.

Consul General Okada, who has explored the consular office’s 125 year history in Vancouver, commented on how harsh life was for those who first ventured across the Pacific and the difficult economic realities which prompted that decision. Then, rebuilding from nothing after the end of WWII was no easy task either.

“The Japanese Canadians, or Japanese who live here, really keep a strong identity as Japanese, maintain the traditions of Japanese culture and retain their modern culture. In particular one of the unique features is: when our office as a consulate organizes a cultural event—which is one of our most important roles—there are many groups or individuals who are doing something traditional from Japanese culture such as playing the koto, practicing Japanese dance, ikebana, tea ceremony, shigin etc. etc. So, our office can work with these people to introduce Japanese culture—that’s a unique feature—there are not many other places where we can work with local communities for these kinds of events.”

Several times during the evening I wished that the newly arrived Syrians—or any others rebuilding their lives in Canada—could witness what 125 years of history has achieved. Perhaps it would offer encouragement to persist in the face of doubt, fear, prejudice, economic hardship and other challenges which might face them.

This entry was posted in Japan, Travel & Culture, This & That and tagged Vancouver Consul General Seiji Okada. Bookmark the permalink.