Finding Beauty in a Flaw

Posted on February 8, 2018 by Lynda Philippsen 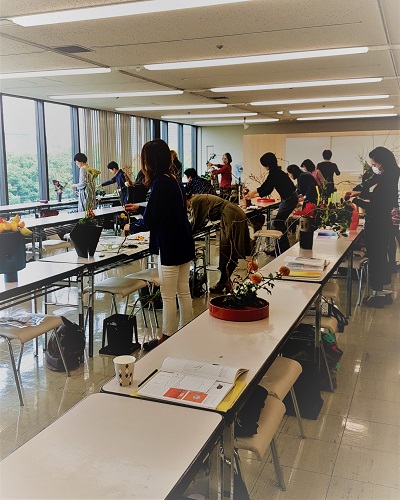 One afternoon as I worked in Tokyo, I was increasingly exasperated. First, there was a limited choice of branches, none of which I particularly liked. Then once I got started with the branches recommended to me by a teaching assistant, they were obstinate, twitchy things that wouldn’t hold their position. I’d set one in place and the second I let go it flipped on me.

The container was lovely, the colours of the leaves rich and the roses gorgeous; however, the proper angle of the shin refused to hold. Everything constantly shifted as I worked. Then after deciding I had done all I could with this obdurate thing, while photographing it the teaching assistant holding the whiteboard bumped it. After she put the whiteboard down she announced that the hikae was wrong. Well yeah. Now everything was even more wrong than before.  Sigh.

Any attempt to fix it before the master teacher began his demonstration would shift every other branch like a game of pick-up-sticks. Plus, at this point I was in no mood to try again. I thought it better to leave it and, if necessary, make a fresh start. I was more than willing to redo the lesson another day.

When my turn for evaluation came around, through the interpreter I confessed that I knew it was not correct. However—and here’s an insight into how the Japanese aesthetic works—the teacher pointed out that the technical errors serendipitously created a particularly beautiful space between the primary branches. Therefore he judged the flaws as acceptable in this case. In addition, the harmony of the colours and the choice of container were excellent. Well done. 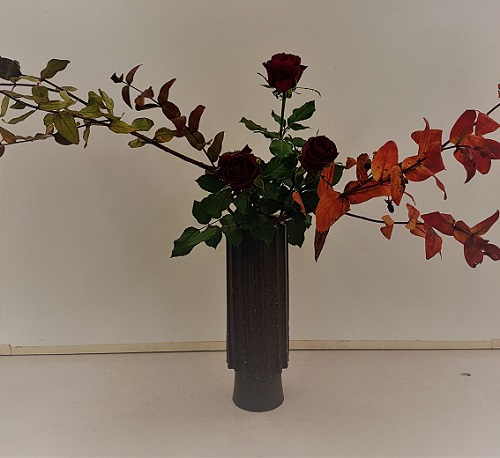 Really? I didn’t get it. Could I trust this evaluation? Was he merely being kind? I had been so focused on the flawed elements that I hadn’t realized there was a space worth consideration, much less a beautiful one.

I admit that when I look at the rather poor photo I still don’t understand exactly where the exceptional beauty is. Even after all this time and my return to Canada, the afternoon’s frustrations taint my perception.

Since then my thoughts have returned to this lesson repeatedly. How many times have I been so wrapped up in the flaws of a thing—anything, not only ikebana—that I have discounted some inadvertent magnificence I might have celebrated and enjoyed?

This entry was posted in Japan, Travel & Culture, This & That and tagged Finding beauty in a flaw. Bookmark the permalink.

2 Responses to Finding Beauty in a Flaw