Posted on February 15, 2014 by Lynda Philippsen

CBC’s headline reads “Patrick Chan settles for silver on Canadian Trail.” Others have said the same. This is just the sort of North American media wanking that has prevailed at Olympic Games since Salt Lake City in 2002. Or at least, that’s when it first caught my attention and has irked me ever since. That year one of the advertisers ran the appalling slogan, “Second place is for losers.”

Yeah, right. Out of the billions who populate the planet only the competitor taking first place on one given day counts for anything. Ludicrous. It’s time to refute the idea that an athlete who does not achieve a gold medal is an also-ran.

I appreciate every athlete’s desire to be on the podium. No athlete aims for the Olympics hoping to achieve less. Even those with an achingly long shot know that sometimes convergence happens in spite of what the odds are. However, the idea of owning the podium—as if it is some kind of real estate or right which can be bought—is odious. It’s the antithesis of what the games ought to be about.

Another CBC writer describes Chan as coming up short. How? Why must Chan point out in post-event interviews that he has won the national championships seven times, the world championships three times and now has two silver medals decorating his neck? Why must Chan graciously remind CBC that he has changed the sport or that he is the most decorated skater in the history of the sport? 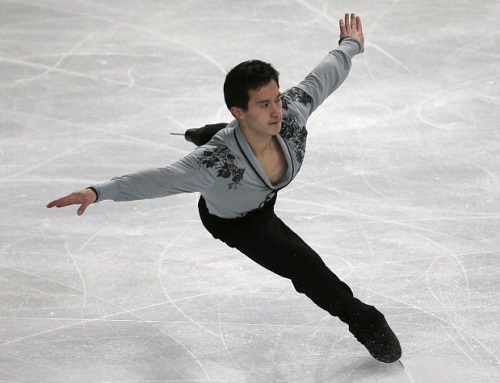 Why isn’t our national broadcaster focused on the successes and achievements of Chan and the rest of our team instead of so-called curses, a medal’s colour or the number count? Why has pre-event hype and post-event athlete-bashing become part of the lucrative theater of Olympic sport? There’s a singular short-shortsightedness on the media’s part when it comes to a measure of what it means to win at the Olympics.

So a shout out to CBC and anyone else who is culpable: Stop undermining the achievements of our team by the use of downgrading language. Since 2002 it has been much less enjoyable to watch champions compete while enduring constant slagging from the snide lines.

Not achieving everything he hoped for in the final four minutes of a given night when no contender had the skate he wished for, is not losing. Patrick Chan did not settle for silver. He WON it.

This entry was posted in This & That and tagged Patrick Chan, Silver Medal, Sochi Olympics. Bookmark the permalink.