Posted on October 9, 2015 by Lynda Philippsen

My relationship with Fuji-sama is special. As I knew I would pass it on my first trip to Japan in 1998, I longed to see Japan’s sacred mountain from the Shinkansen. However, all that day haze obscured much of any view. Close up, the towns and houses galloped by. No distant hills were visible at all.

Then, the clouds thinned just long enough for a hazy glimpse that seemed to fill the entire window. 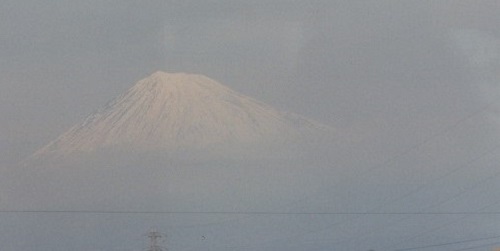 Fuji from the Shinkansen 1998 LGPhoto

In hindsight, I realize the zoom photo has overlaid fact in memory. Even so, in that moment, time (even Japan Railway time at 200 kmh) stood still in an extraordinary way. It seemed as if the mountain had briefly brushed aside a veil with intention. I had been acknowledged. Welcomed.

Whether by land or air, every trip after I have been privileged with Fuji-sama’s greeting or farewell. One year I flew directly over and looked down into its crater. But with mountains, you never know. Again it was cloudy the day I travelled  from Tokyo to Toyohashi; however, as we rolled into the countryside, Fuji-sama thrust his blue nose through the low-lying clouds. I set my camera to multiple frames and let it fly.

Fuji through the clouds 2015 LGPhoto 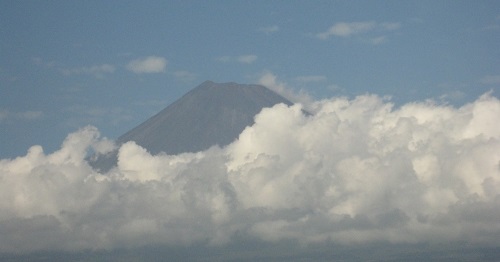 Before leaving yesterday, I stowed my camera in my suitcase. I’d had enough of taking photos and did everything I could to ease the load on my over-taxed shoulders. At the airport I got a few last runway shots with the tablet camera and stowed that, too.

However, my last view of Japan was not of the runway or receding landscape smudged away as we climbed upward and banked eastward into the clouds. Joyfully, no.

As we passed between Osaka-Kansai and Tokyo, Fuji-sama’s blue nose nodded back through a sea of sun-gilded clouds. As if to say goodbye and goodnight before colours deepened to persimmon then mulberry and ink.