Sugamo’s Jizo Dori is well-known in Tokyo as the spot to purchase aka-pantsu, scarlet underpants to fire up the winter bones, increase heart health and blood circulation. 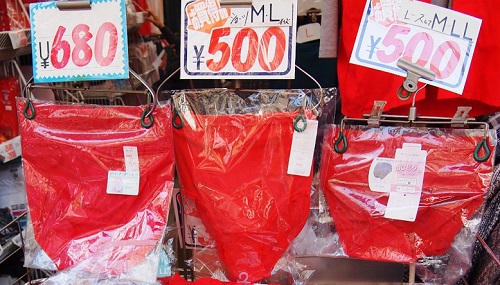 Blood-stirring aka-pantsu for the geriatric set on Jizo Dori, Sugamo. 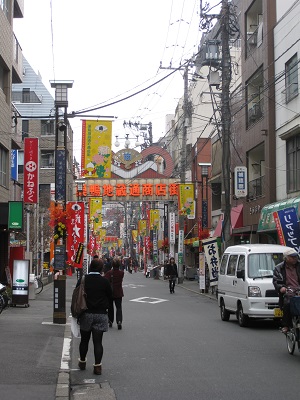 Home to shops which sell all the daily goods any household might need, tchotchkes and the usual kitsch galore, street vendors with fresh produce or the morning’s catch, restaurants and coffee shops; the street is level, barrier free, and easily accessed by people facing mobility challenges. 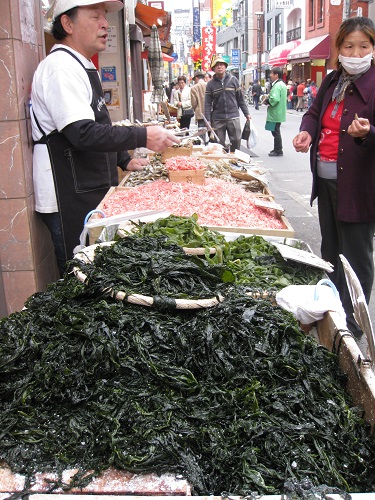 Vendor and shoppers on Jizo Dori

Another draw to the area is Koganji Temple (also known as Togenuki Jizoson), a small temple with a centuries-old reputation for curative and life-extending powers. Here worshipers can purchase picture talismans to relieve pain or heal conditions. These they sometimes ingest or more commonly place on the various body parts which ache. 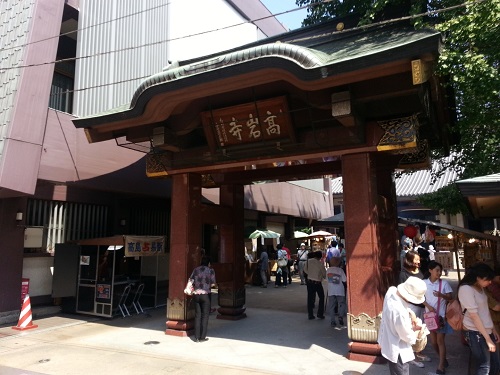 In addition, supplicants may wash the statue of Arai Kannon (Goddess of Mercy) in the courtyard with a white cloth. Placing the cloth on the corresponding parts of their own bodies in need of healing is also believed to cure those ailments. As the options run out, the Kannon, being merciful, will also hear petitioners’ prayers for a speedy and pain-free death.

In the absence of anything but ancient and anecdotal evidence, whether any of it does actual good or not is anyone’s guess. But we’re in an age where alternative medicinal practices and faith therapies are looked on with at least bemused tolerance if not greater acceptance. It probably doesn’t do any more harm than hiring a life coach, chanting affirmations or positive thinking.

According to Wikipedia’s list of 2013 stats provided by the World Health Organization, only Monaco ranks higher (87.2) than Japan (84.6) for highest overall life expectancy.

But the average Japanese obaa-san trumps Monaco’s overall figure by one-tenth of a percent (87.3). Hmm. Perhaps it’s time to set aside skepticism, bring on belief and grab some red-hot panties.