Who is watching you?

Camera in hand I’ve stepped back a few paces into a street that T-bones Jizo Dori just outside one of several bright red Maruji stores in Tokyo’s Sugamo. In this district where elasticized polyester is on-trend, elderly women flock to purchase fiery underpants and other crimson-coloured winter garments.

Ostensibly the hot colour brings good fortune and bolsters the wearer’s health by revving up the blood and heart through the cold, dark season. Chili pepper charms and temple visits are popular here, too.

Composing my shot as best I can from what is a less-than-ideal angle, a well-groomed gentleman wearing a beige cap and windbreaker cycles into the frame and stops. 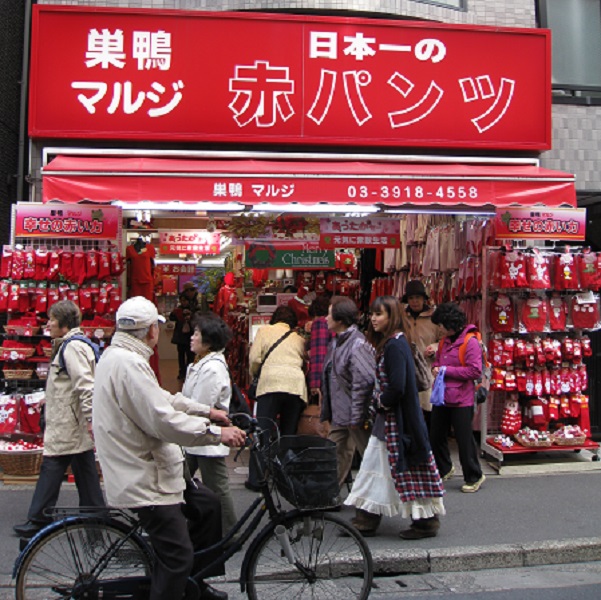 I hold the camera steady thinking he’ll move off in a moment. Then I’ll get my shot. But no. He parks legs astride gazing at the store front, apparently mesmerized by the enticement of scarlet socks, camisoles and panties.

Waiting for him to pedal out of the picture my mind turns to film theory’s view of the “male gaze.” But today in a subversive little reversal my lens and eye have caught him. If I were to speculate about the monkey chatter in his mind, perhaps he considers the darkening season ahead and imagines his hearth with embers aglow.

While fixated on my digital screen I’ve gamely created a character and ascribed a motive to a person who has no idea that he is being scrutinized or judged—primarily on his appearance together with his prolonged pause in front of this particular place.

Then, tired of waiting for the shot and having invested time musing about him, I decide he is the shot. Without his knowledge or permission, I pixelate—and now post—him.

When resizing the resulting photo I notice a second viewer in the frame. A young woman walking past the shop has also fixed her eyes on him. 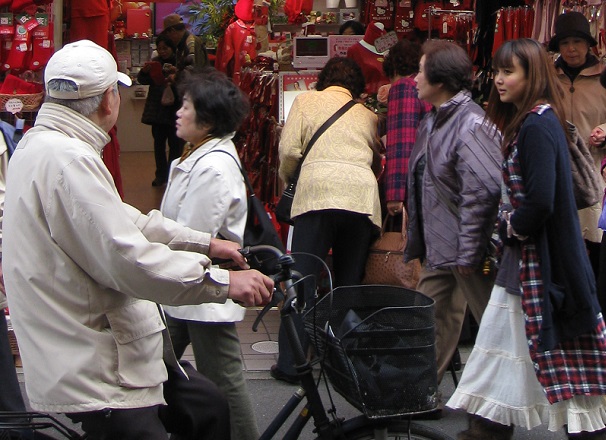 Another woman’s gaze on the geezer. A politely quizzical one at that: Eeeeh? You’re still up for that, ojii-san?

Here he is, framed by his viewers: a foreign traveller, a young Japanese woman, and now you, the reader sharing the images and looking in. What interactionist or post structural feminist theory would make of the multi-layered moment, who can say? Enough that it’s both provocative and droll. Might make you want to look over your shoulder.

3 Responses to Who is watching you?