Learning to get around

Posted on December 24, 2011 by Lynda Philippsen

In seconds it’s possible to become disoriented in Tokyo’s snakes-and-ladders streets. Sometimes it’s much easier to haphazardly wander than  find a specific location. Doorways often aren’t numbered in Arabic numerals. Outside the major tourist hot-spots, signs are primarily in Japanese.

Guidebooks provide instructions that read: Take the east exit and walk 5 minutes. Left? Right? Around in circles? (Believe me, I have. Some of those stories will be coming in future posts.) That’s why locals have GPS on their phones. Not surprising then, that Tokyo, as well as Japan in general, intimidates at first. 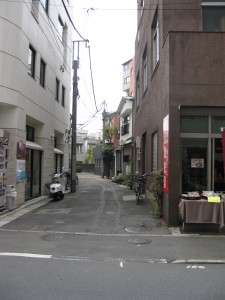 Often streets look like alleyways. But frequently that’s where the interesting stuff is—tucked away in back of the major streets or in shotengai (local, covered commercial thoroughfares usually near railway stations).

Every traveller has her own style. Frantic scrambles through multiple attractions day after day are not for me. Much as I wish to, I can’t see it all, which is why I like to settle in one hotel for several days and explore by foot, transit or taxi from there.  Since I don’t understand Japanese I must remain hyper-mindful. Keeping track of the sun and counting side streets, memorizing landmarks, maintaining a mental tether to the noise of larger thoroughfares, I build a spatial understanding of my map and the character of the district.

I prefer to be in Japan not buzz around it.

This entry was posted in Japan, Travel & Culture and tagged Finding your way in Tokyo without Japanese, Japan travel. Bookmark the permalink.

One Response to Learning to get around