The moment I met Masa Shiroki in his Artisan Sake Maker shop shortly after it opened on Granville Island, I was conscious of the fact that he was making history. (And I was lucky enough to be a storyteller on the sidelines.)

As the first person to produce handmade sake in Canada from Canadian water and imported rice, Shiroki went on to successfully grow sakamai (sake-quality rice) in Abbotsford, B.C., the most northerly sakamai production in the world. Though the first crop failed to produce wine, it produced 100% Canadian rice-seed. From the second Abbotsford crop he produced Osake Fraser Valley Junmai 2013, the first 100% Canadian, organic jizake (local sake).

Yesterday, another first.  When I joined Shiroki on his field, the first rice-harvesting combine in Canada (recently shipped to Abbotsford from Hokkaido) brought in the harvest destined to become the 2014 Osake Fraser Valley Junmai. 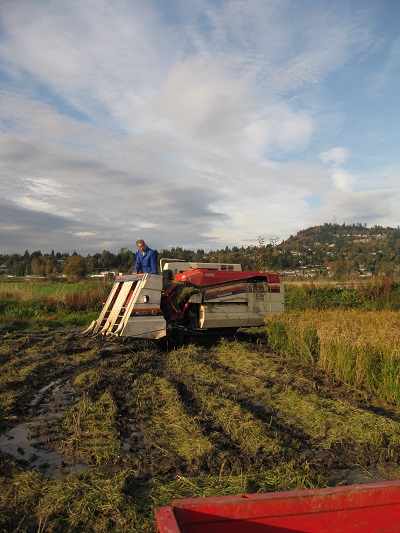 For the past few weeks the whole thing had been touch-and-go for Shiroki. Weather rarely courts the farmer. With his fat crop still in the field, the West Coast weather rapidly deteriorated. Decimating clouds of birds moved in for a final feast before heading south. However, he could do nothing but wait for the arrival the engineer coming from Hokkaido to teach him and his field hand Eiji how to operate the combine. Wait and hope. 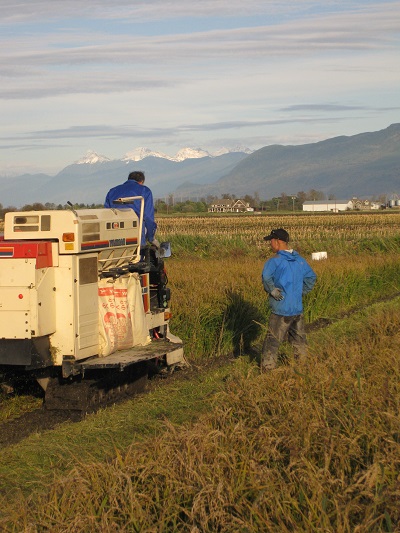 Rice-harvesting Combine at Work in Abbotsford 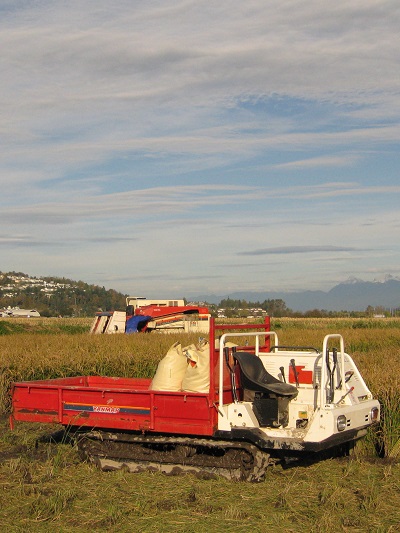 Bags of Sakamai in Abbotsford

In Shiroki’s case the Abbotsford kami smiled. On the engineer’s arrival, a narrow window of fine weather opened. Even Mt. Baker (as if standing in for his distant cousin Fuji-san on the other side of the Ring of Fire) came out to preside over the show in his resplendent whites. 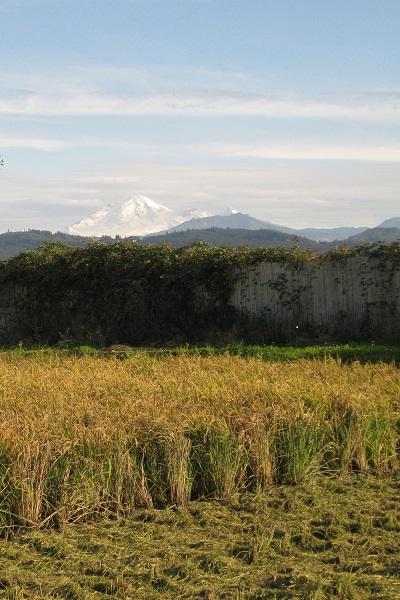 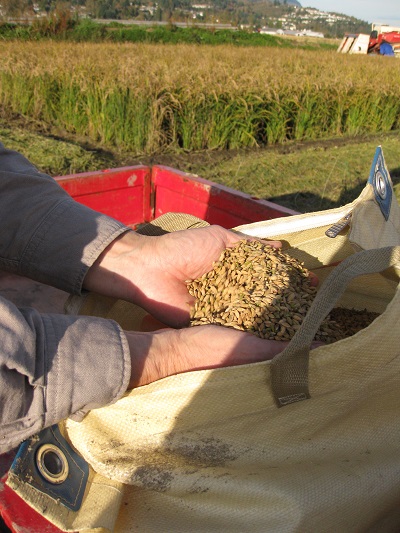 However, on the first day the machine broke down. Just where in the Fraser Valley will you find Japanese parts? But luck (backed up by perseverance, tenacity and a semi-desperate shopping trip) again smiled on Shiroki. By mid-week the problem was solved and they were back on track. Though the fieldwork is almost done, there’s no rest for the vintner. Now the winter’s work begins.

Some of the back story to this week’s harvest appears in the Fall 2013 issue of In-Flight Review. Read New World Sake (2013) here.  An earlier story also appeared in Montecristo in 2010. Read Going Against the Grain (2010)here.

One Response to New World Sake: Round Two