Posted on October 3, 2014 by Lynda Philippsen

On arrival, I don’t have much information on what Niigata city offers other than a river cruise with three daily sailings and a museum.  There’s also a shrine. It’s Japan. There’s no escaping senbei or shrines.

The weather has deteriorated to the point where strolling around to allow for serendipitous surprise or a leisurely river cruise has lost all appeal. Because I don’t have a plan and have the pleasure of indulging whims instead, I stop at the Tourist Information Centre outside the railway station. I have 6 hours in the city. What should I see?

The very savvy attendant gives me a list of questions about the types of activities I enjoy most. Based on my answers she offers her top options for my consideration. However, the site she thinks I’d enjoy most, the Northern Cultural Museum and Ito Estate is some distance from the station. As I have a limited amount of time and the weather is poor, she suggests that a taxi will be my best bet even though it’s more costly. I agree with her, and grab a cab waiting a few meters away.

The present museum is a small part of what was a vast property belonging to the Ito family which had amassed huge tracts of forest and farmlands over the centuries. One of the largest land holdings in all of Japan during the early 20th century, in its heyday the Ito estate required nearly 80 overseers and 2800 tenants.

Following World War II, The Land Reform Act of 1946 forced the Ito family to reduce their more than 2300 hectare holdings to three. At that time the mansion and its treasures became a museum. 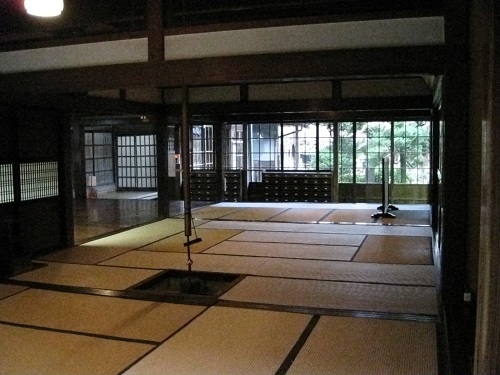 The Interior of the Ito Family Home

Constructed in the mid-1880s in traditional Japanese style, the Ito family home boasts more than 60 rooms. In these I am shocked to find Egyptian, Grecian, Assyrian, Chinese and other antiquities as well as Japanese art behind single-pane glass or fully exposed without any climate control technology or security whatsoever.

These artifacts immediately reveal the extent of the Ito family power and fortune as well as the refined sensibilities of the former heads of household who acquired them. Though understatedly styled as “wealthy farmers” in the museum’s promotional material, a little research indicates the Ito family is a noble line of Japan’s ruling elites with a lineage extending to the Edo period (1603-1868). In English the present owner is styled as a Count or Baron; his father a Prince.

In the surrounding walking garden created in the 14-15th century style, I see that most of the trees and shrubs have been staked with yukitsuri (rope & bamboo supports) in preparation for winter’s heavy snows. 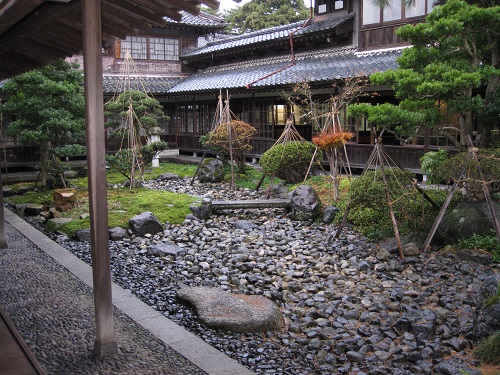 Shrubs and trees staked with yukitsuri against winter snows.

Also, one of the 5 tea houses in the garden and unique to this estate is the only triangle-shaped tea house in the nation. 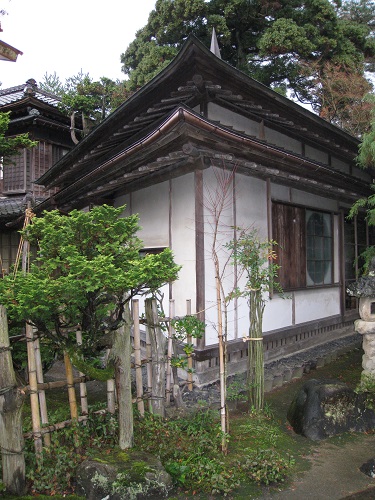 I wander through the house and because it is still raining heavily, view the gardens from the verandas. As I often do when touring stately homes, I swan around pretending that this is my home and these antiquities my treasures. Until my feet get painfully numb with cold, that is. 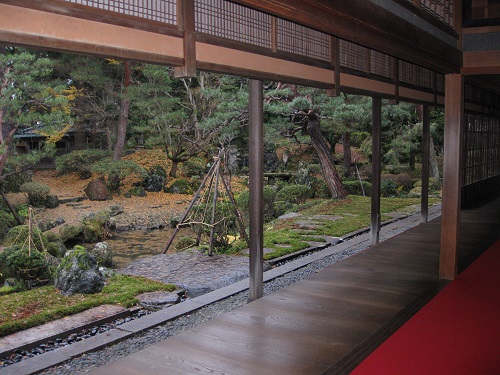 Garden view from the veranda of the Ito Estate

Then I smile to recall the benefits of insulation and central heating which are standard in my much humbler digs. Romantic imaginings can take a notion only so far—and definitions of life’s finer things, even princely ones—are relative. Not enamoured of a winter’s discontent I say: A house! A house! My kingdom for an insulated house!

One Response to Northern Culture Museum and Ito Estate, Niigata