On the first morning of harvest, the rice combine conks out. 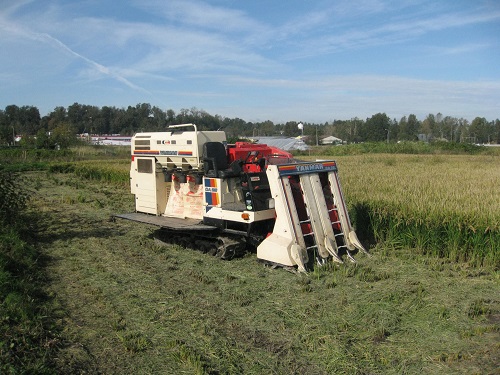 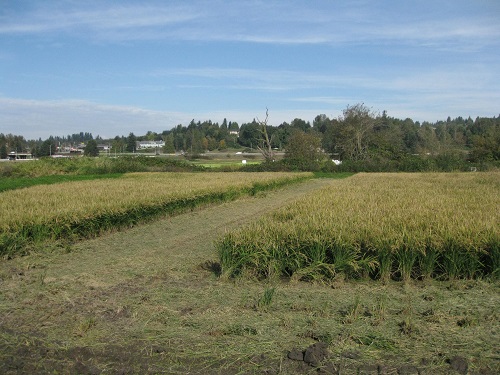 The farmers, field hands, supporting personnel and media who have gathered to witness and celebrate the fourth sake-rice harvest in Abbotsford, sit to the lunch laid on for them by Canada’s sake-producing pioneer Masa Shiroki and his wife Yukiko earlier than expected.

Unfortunately it’s a bigger holdup than first thought. Parts must be flown in from Japan and won’t arrive until after Thanksgiving. 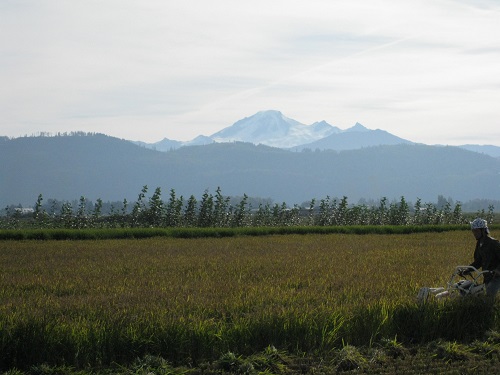 When I join Masa and Yukiko and their assistant Yoshi on the field the next day, they are back to doing it the old-fashioned, labour-intensive way. 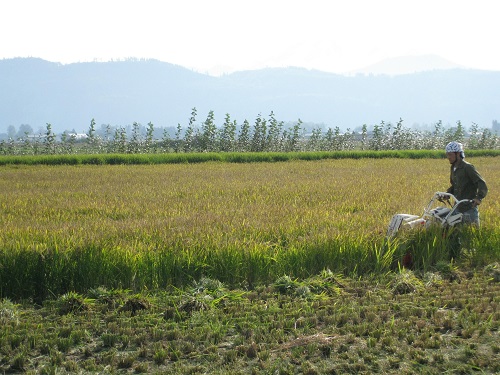 Yoshi operates the rototiller-like harvester which cuts and bundles the rice. 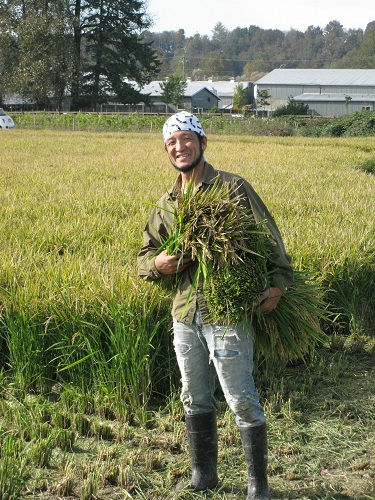 Masa drives around the field in a motorized cart, picks up the bundles the harvester leaves behind, and delivers the bundles to the thresher. 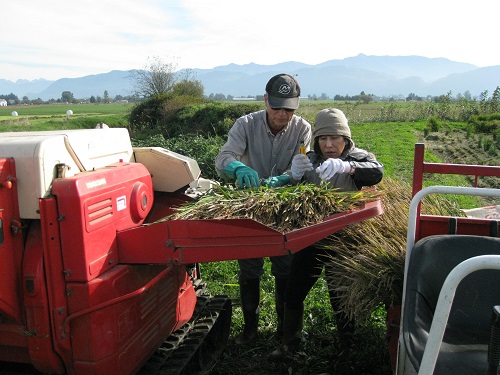 There he and Yukiko remove the cords from the bundles and feed them into the thresher by hand. 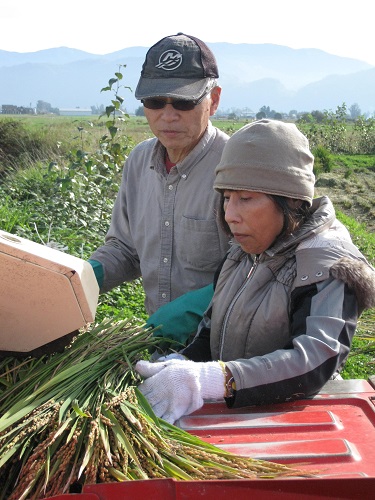 Masa & Yukiko Feed the Thresher One Bundle at a Time 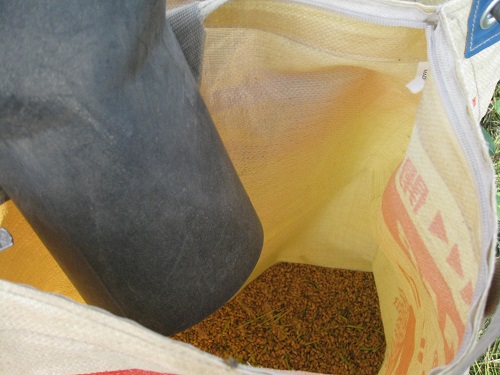 The combine would have done all of this for them in a day with one operator on top. Another would travel alongside in the cart, remove the bags of rice and transport them to storage.

How disheartening. In spite of the promising start and long, hot summer, the 2014 season has not been kind to the Shirokis as they continue to pioneer the northernmost production of sake rice in the world.

“It has been a year of setbacks,” Masa states as he gazes wearily across the field. This time I notice he doesn’t follow that remark with his usual quick quip to strike an upbeat note.

There were staffing turn-overs and new hires to train as there always are in a business. In addition, when regulations regarding Land Based Winery designations changed this year, rice was not included in the allowable crops. Not for him the long-held dream of establishing his own kura (sake winery) with farm-gate sales and the significant tax breaks under that designation. At least, not yet.

Then the visa for his temporary farm worker from Hokkaido could not be renewed. Without his rice-farming expertise and daily work in the fields, two of the three promising plots succumbed to weeds. 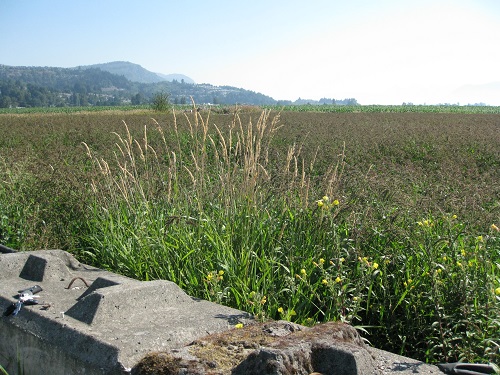 Only by determination and Herculean physical effort did Masa and Yukiko manage to save one field.

Day after day after day the two of them drove from their North Vancouver home to Abbotsford early in the morning, cut the invading weeds by hand, and hauled them out of the shin high muck before the sun got too hot. 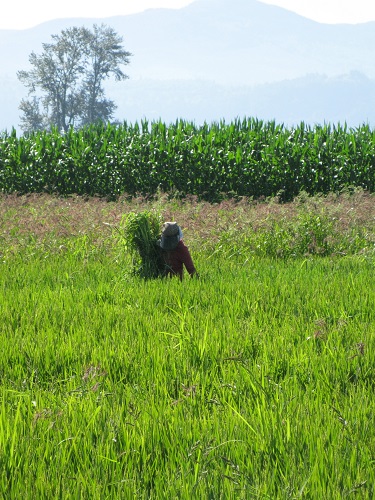 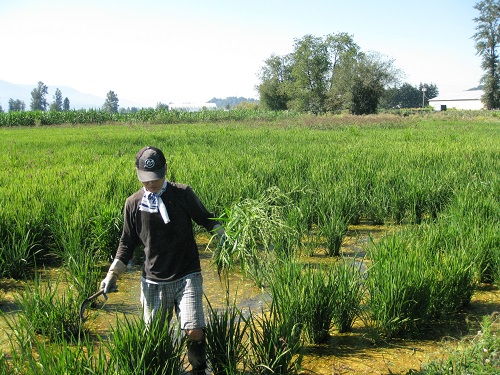 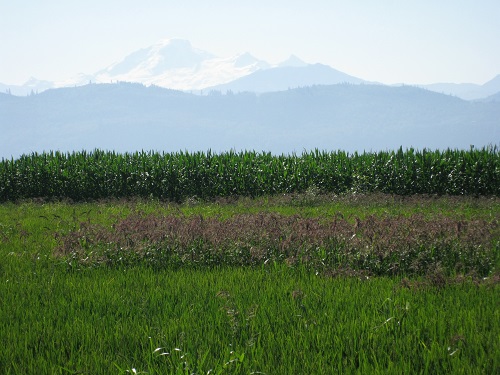 Winning the War on the Weeds

Mid-afternoon they would head back to their Artisan Sake Maker’s shop on Granville Island to oversee operations there.

When people sample the 2015 Osake Fraser Valley Junmai rice wine next spring, most will have no idea what it really cost. There’s not a fair price that can be put on the sweat equity required to get this year’s rice into bags—never mind bottles.

Still, that’s not quite the end of the story. This year under Masa’s guidance, a farmer in Surrey is the first to grow an experimental plot of table rice. That promising crop is still in the field. Is there enough time to harvest both with the single-man harvester before the Thanksgiving weekend’s forecast rain moves in?