The sunshine and intense autumn colours added to the fact that it’s a weekend have Kyoto’s major attractions clogged with traffic and hordes of sight-seers. However, Inoue-san has no problem as he speedily navigates his scraped and battered little car through narrow streets. He apologizes to Kyoko and me, his guests for the day. His larger, more comfortable vehicle is in the shop being fixed. Of course I’m curious, but I have learned not to ask discomfiting questions.

Spotting a space created as someone pulls out, Inoue turns hard and nips in. The people standing nearby audibly approve of his daring manoeuver, and he seems quite chuffed by his good fortune and their admiration. This temple visit wasn’t on the original plan; however, the space in front of the gates appeared as if by design and now it’s our destination, if not our destiny.

Inoue assures us we still have plenty of time to get to Hosen-in. Initially we had meant to get to Sanzen-in today, though it seems unlikely that we’ll make it before it closes. Not with today’s crush and  two sites to squeeze in before. 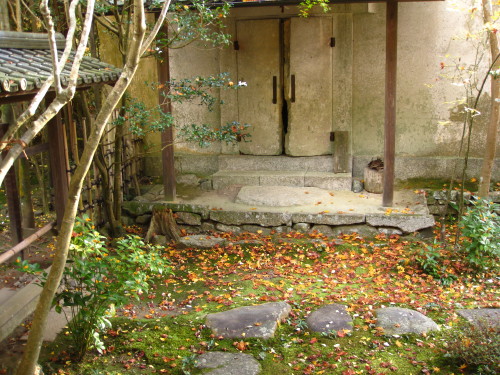 Famed for its autumn colours, Rengeji’s lake with its symbolic ship, crane and turtle stones is a small but exquisite example of Edo period (1603-1867) garden design—sometimes attributed (though not confirmed) to samurai poet Jozan Ishikawa. Of course there is no such thing as a quick stop. In companionable silence we settle on the veranda boards polished by millions of socks and gaze on the lake. Arbitrary destinations and schedules don’t matter. Moments do. Temples aren’t worth rushing. They’re meant to be contemplated. The ones you won’t get to see today have existed for hundreds of years. They will wait for you.

This entry was posted in Japan, Travel & Culture and tagged Kyoto, Rengeji. Bookmark the permalink.