I first stood at the massive pillars of Nanzenji Temple’s Sanmon Gate in the late afternoon after walking from Ginkakuji (The Silver Pavilion) along the Philosopher’s Path. The overcast skies under which we’d started now pelted us with rain. Our group’s enthusiasm for one more temple, even one of the most important Zen temples in all of Japan, had vanished. We called it quits.

On my second attempt, a fine spring afternoon, I planned to walk the short distance from Yasaka Shrine to Nanzenji and enjoy a leisurely visit to the temple alone. However, distracted by the Gion shops along the way, I set out later than intended after dawdling over a cup of coffee made from water from a consecrated well that used to be a part of Yasaka Shrine.

I got lost. Though it looked straightforward enough (and was), the map I had and the names of the streets failed to match. Added to my difficulty was a great need, on account of the coffee, to find a bathroom—something I had thought would be available after my 15 minute stroll to Nanzenji.

However, to use the washroom and get directions, I had to take enough time to be polite for tea I didn’t want. That a tea shop materialized in the area was miracle enough. The ironic inconvenience of adding more liquid? Shoganai. (It can’t be helped.)

Even with the superior map the tea shop proprietor provided, I managed to screw up his redirection so badly that I ended up on the highway to Otsu. After asking two fellows on the roadside fixing a motorcycle for directions (who told me about a shortcut the locals use which ended up being a serendipitous delight and will perhaps be a post on another day), I arrived at the temple just after it closed. Mercifully, a few taxis were still hanging around waiting for the last stragglers like me.

On my third visit luck holds. Kyoko’s friend Inoue-san is escorting us around Kyoto for the day. When asked what I wanted to see, I didn’t hesitate: Nanzenji. An informed and sensitive guide who allows us to contemplate in silence, Inoue also pays for everything: entrance to every sub-temple and souvenirs for both of us. 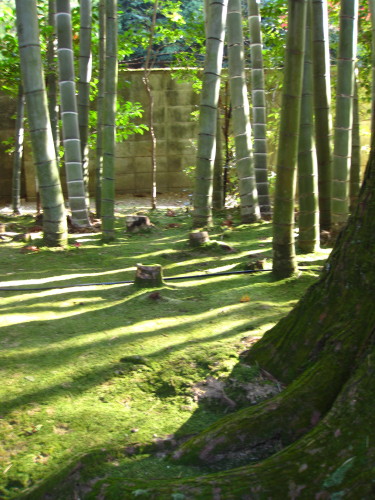 As it’s a Saturday at the height of koyo (autumn leaf viewing) season, the place is jammed with people crawling the paths like ants. Still, nothing diminishes Nanzenji’s serenity. Though the constant crunch of brisk footfall on the gravel proves otherwise, time seems suspended in a single moment of eternal solitude. Just another paradox, another of Japan’s numerous charms. The autumnal fires are in full, glorious blaze on this warm November morning. In hindsight, I am glad, now, that I first see it this way. Perhaps it is fate. Anything else would have been less.

This entry was posted in Japan, Travel & Culture and tagged Autumn in Japan., Autumn Leaf Viewing in Japan, Nanzenji. Bookmark the permalink.