The Tanigumi Kegonji experience is over, but has not ended. Afterwards I feel strangely expanded as if somehow—but quite irrationally—I contain all that is. I have no explanation for my altered awareness in the void below Tanigumi Kegonji other than insights gained through the explication of the ancient myth and archetypal symbols as found Rilke’s poem “Orpheus. Eurydice. Hermes.” (See links at the end of this post.)

Only later do I learn that Tanigumi Kegonji temple is the final destination on a renowned 33-temple pilgrimage. Here pilgrims can search the cave below the temple for a smooth stone. If they find it, they have touched Buddha’s heart.

As I groped my way hand-over-hand along the stone wall through the void that day, did I touch Buddha’s heart? I don’t think so. If anything, something ineffable touched mine. What it was, I cannot say. Nor do I wish to attribute any meaning to it that I might contrive and thereby diminish the Mystery.

In “Easter for Atheists” from The Philosophers’ Mail (a blog launched under the School of Life umbrella in January 2014) the unidentified writer claims that even though none of religion’s supernatural claims can ever be true, it is no more reasonable to dismiss religion in its entirety than it would be to disregard Anna Karenina on the grounds that the tale had been somewhat invented. The writer claims religions—to which I will add numinous personal experiences such as this one—are intermittently too interesting, wise and consoling to be abandoned to those who can believe.

In my attempts to make sense of my descent into the underworld, I find something else quite practical—and much too consoling to be abandoned—that I did not comprehend before. In an instant, that patch of slate gray appearing in the utter darkness slammed my consciousness with great, life-altering force and fundamentally changed my perception.

No matter how dismal it may have seemed at the time, the many-varied gradients of gray which have clouded my life were never layers of oppressing darkness; rather, they were deeply nuanced manifestations of light. All my life, I have walked only in light.  When in Tanigumi Kegonji I knew complete darkness for the first time, it was the All That Is and it was All Love. 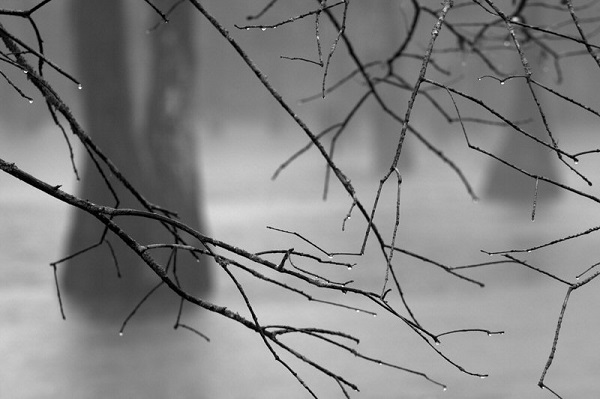 Never again will I see a bone-coloured mist hanging from the trees or obsidian-coloured water droplets glittering on a branch as part of darkness or gloom. Now, when titanium rivulets flow down the black pavements; or pewter, platinum and slate clouds streak the night sky; I see light. Even at its bleakest, this shadowed world is luminous.