Posted on September 10, 2013 by Lynda Philippsen

I’m here at Tofukuji Temple, one of five primary Zen temples in Kyoto and yet another National Treasure (which claims the oldest Sanmon  or main Zen temple gate in Japan), because a friend insisted I must see this this temple on my return from Fushimi Inari. Honestly, I almost gave up the idea after the quad-killing trek up and down that hill.

Serendipitously, I did not. I luck into an extensive ikebana (flower arranging) display spread throughout the temple’s extensive rooms. Each arrangement is a garden and a work of art of its own. To my mind, these quite outperform the temple’s exceptional buildings, statuary and gardens—including the often photographed square cut stones arranged in a checker-board design in the northern garden. Though really, how can you compare? Especially when one work after another like a relentless tsunami overwhelms every sensory perception. 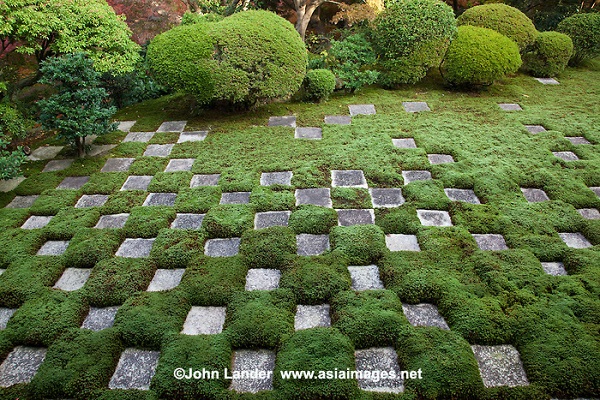 The ikebana artists—for that’s what they are—reveal amazing thought and calculations in their work. In numerous cases, flowering branches not currently in season had to be forced to coincide with the show as well as reference literary tropes—even tropes about tropes. Such is the nature of Japanese subtlety. And bliss, I am present to drink it in with every sub-atomic particle of my being. Love has failed me many times. Beauty, never.

Afterwards, stepping outside, otherworldly shakuhachi (Zen bamboo flute) music seems to float on the light cloud cover.  Drawn to its source, I listen from the veranda rather than remove my shoes one more time. A group of students and teachers performs in the hall.

Standing and breathing with the music I experience an unusual realization. I am full. Free of longing.

Check out more of John Lander and his exceptional photography here.