Posted on December 24, 2016 by Lynda Philippsen 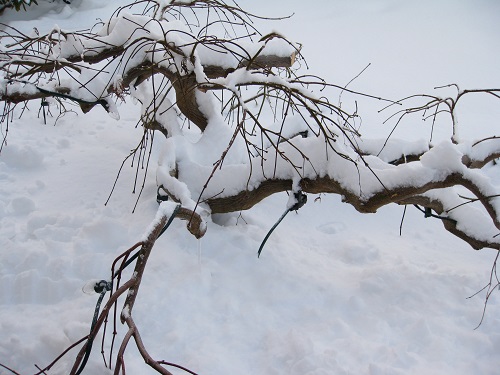 That year snow began falling during the Christmas Eve service. Afterwards, groups of men worked to shove each car through the nearly 12 inches of heavy white stuff. Fortunately a snow plow had passed along the Island Highway while we were inside church, and carloads filled with excitement-crazed children made their way home without too much difficulty at the end of the service.

In our house, presents waited until morning. I awakened around 6 o’clock when I heard the furnace turn on and our mother moving about as she stuffed the giant turkey. Then the oven door opened and closed. I lifted the corner of my bedroom curtain to reveal a gray white coverlet over the still-dark world.  During the night another 12 inches had fallen.

I slid deeper under my covers knowing we would have to wait until 8 before being allowed downstairs. No point in getting worked up. I knew the drill. Dad would read from the Bible and pray before one of us would be selected to hand out the presents. Only after they were distributed were we allowed to open them–one at a time. No mad ripping chaos allowed in our house. Might as well settle in and stay toasty.

After a short time I overheard the phone call telling Dad that church was cancelled on account of the snow. Hooray! This year we would have all morning to play with our presents.

Then a loud thunk as a transformer blew. The power was out. I heard my mother shriek, “The turkey!” Always pragmatic and unflappable and with phone lines still operational, Dad called Grandma. She was the lone hold-out in the family who had not given up her faithful oil stove for electric. Could we cook our turkey and eat at her place instead of ours? Of course.

Dad loaded the turkey and anything else requiring an operational stove into a large box. He strapped it to the toboggan, and set off on the half-mile walk to Grandma’s place.

With the furnace also out, on Dad’s return we didn’t dawdle over breakfast or focus long on our new toys. We took one thing to play with, bundled up and walked over to Grandma’s where the oil stove soon warmed our skinny, numb bodies. After a while our cousins came too as there was no power at their place either. Fourteen of us crammed into her 500 square-foot kitchen and living room.

We opened Grandma’s presents—always a new pair of hand-knit slippers. We played games. We sang. We ate. And ate. The turkey. All the trimmings. Tarts and pies. Mountains of nuts. Piles of Japanese oranges. Rosebuds and hard candy. No one counted a calorie or cautioned anyone to stop. We simply refilled the bowls when they ran low.

As the afternoon’s moody skies deepened into night, Grandpa lit the kerosene lanterns. We carried on in their glow and the warmth of the old oil stove. Thankfully, my cousins and siblings—7 rowdy boys—bolted to the attic for a good part of the time. The men sat in the living room and talked.

We women washed and dried the dishes. Afterwards we sat down to chat and relax around the table. Was anyone still hungry? No. We ached and groaned and insisted we couldn’t eat another thing.  Before long my aunt reached for the nutcracker. I popped a couple of rosebuds as I peeled another orange. Soon another pile of nutshells grew as we chucked them into the center of the table. We looked at each other, laughed and shook our heads. Tomorrow we would be sensible again.

After the power came back on we reluctantly made our way home to our own frigid houses. Except for two dolls at age 4 and 9 and at 6 my letter to Santa Claus which was read over the radio, I remember few specifics of the happy haze of childhood Christmases.  However, this charmed day remains indelible.

This entry was posted in This & That and tagged Childhood Christmas memory. Bookmark the permalink.

3 Responses to An Unforgettable Christmas