After their brief moment of glory, once the leaves burst green among the pale sakura blossoms, the combined colours often appear dusty and unremarkable against late winter’s brown hillsides.  The magical phenomenon so long awaited is all but past.

The Narita Express creaks, clacks, groans and sways toward the airport. I am the only passenger in the car. 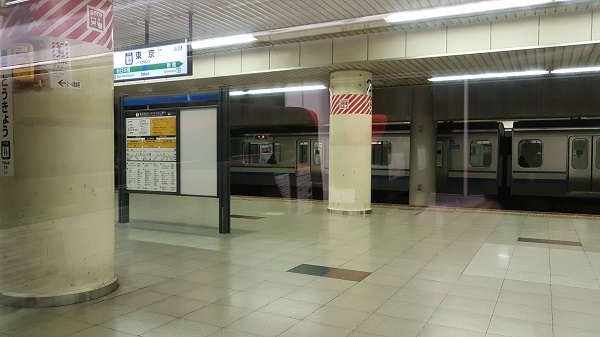 When I pass through Tokyo Station the platform is empty.  However, once the NEX glides into the countryside farmers alongside the tracks prepare the rice fields. A reassurance of sorts that some things—at least for the moment—might remain the same. 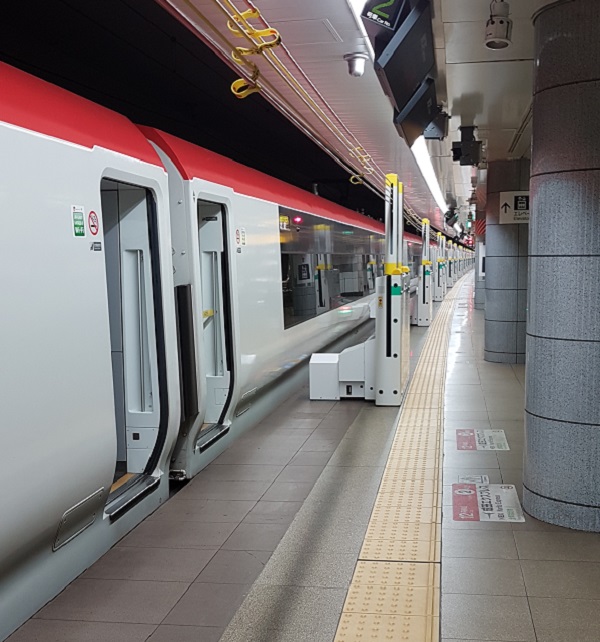 At Terminal 1 I am the only person to disembark from the 12-car train. 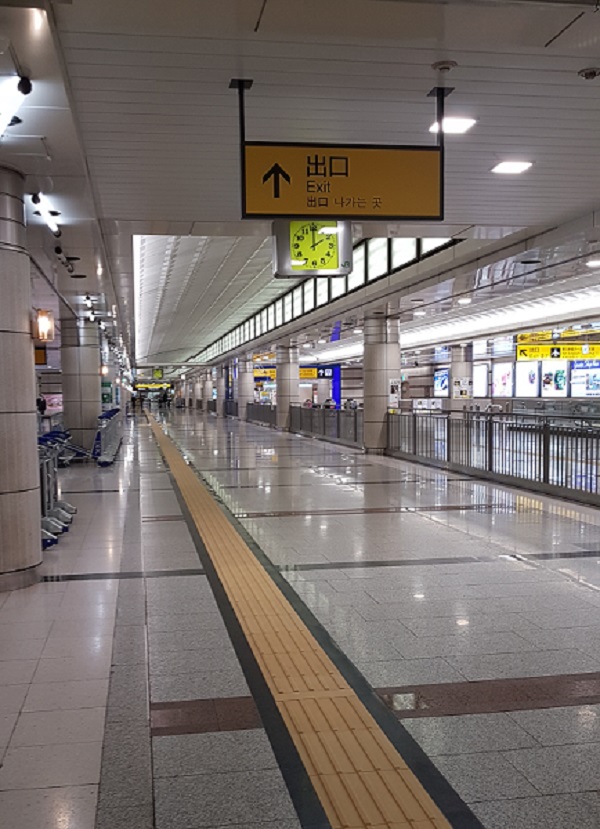 Small clusters of employees at various kiosks try to look busy. Though signs ask people to maintain a distance of 2 meters, in one area young employees in smart uniforms are cleaning the wheel chairs. Not one chair each and 2 meters apart, but 5 people on one chair polishing the spokes, wiping the seat, sanitizing the arms, polishing the tires. Social clumping is the norm here. Social distancing will take a while to catch on.

I get my bearings, pick up my suitcases from Yamato Transport and make my way to the Air Canada check-in counter. As I hand the large suitcase over I tell the attendant who hoists it onto the scale that I know it’s overweight. I’ll pay for it.

You’re okay, it’s only 49.9, he says. Whew! I’m shocked. Is he giving me a break? I’ll take it. In a few seconds he tags the bags and I am on my way to the shopping and restaurant sections with lots of time prior to security check-in and boarding. I use the time to walk and enjoy a meal of wagu beef.

I drink a glass of wine and watch the sun do her best to look cheerful behind the haze. No crimson glory from her tonight. The faded sakura trees along the far side of the runway stand up straight, but I can see their heart isn’t in it. Not honne. Only tatemae.

Clearing security involved no line up whatsoever, just a few stragglers dumping stuff into bins, then onward to a quick stamp at the immigration/customs wicket. Everywhere personnel outnumber the passengers.

Once through the doorway and looking for the direction of my departure gate the gentleman in charge of the Special Assistance vehicle, a gregarious soul about my age, almost prostrates himself asking to drive me. 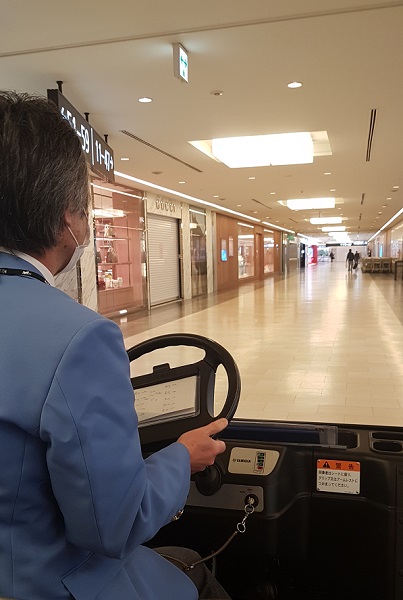 I meant to refuse until I realized how desperately he needed something to do. Thankfully my silvery hair might make the charade believable, and if anyone wished to quibble I did have a broken heart. Not every affliction is visible.

The aircraft’s departure was delayed by two hours. The sun beat into the seating area so I moved to an empty area on the opposite side to charge my phone. The last thing I wanted at this stage was to be denied boarding because I looked feverish.

However, no one checked with validating instruments. Just a verbal question as to whether I felt sick or had symptoms. Who would answer truthfully if they had? Besides, the 25% shedding the virus without symptoms are as dangerous as the ones who are ill.

But wash your hands anyway. 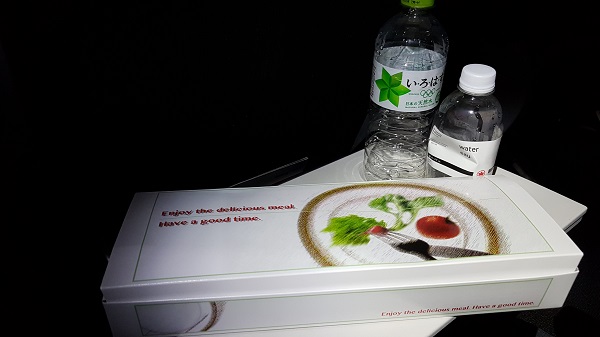 At the time I regretted the wagu beef with its unnecessary sweet sauce as it was less than the best I’ve had. However, I was grateful for it as it beat the boxed potato salad sandwich, mini-Toblerone chocolate bar and bottle of water in-flight dinner service.

No pillows. No blankets. But with only 150 passengers on board, unless traveling as a couple or family, individual passengers enjoy three seats each. After dinner I belt in loosely from the middle seat, take a sleeping pill, curl up and dream a conversation with the COVID-19 virus.

An hour out of Vancouver we receive a dry croissant, a cup of fruit and a bottle of water. No coffee service. At 10:30 AM our craft lands and settles into stillness like a swan on water. The sleep has left me refreshed and my second April third begins. Twenty-four hours earlier I had been walking around my Tokyo neighbourhood storing pictures in my heart and on my camera. 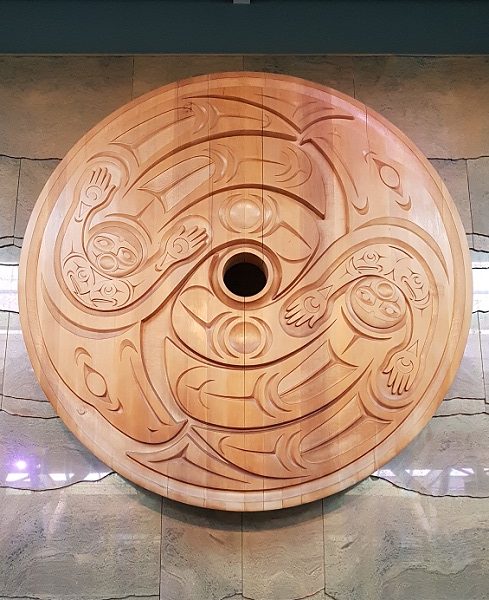 Heading toward the customs area I pause as I always do in front of Susan Point’s ‘Flight,’ which holds the record as the largest spindle whorl—oddly symbolic in an uncharacteristic way now. 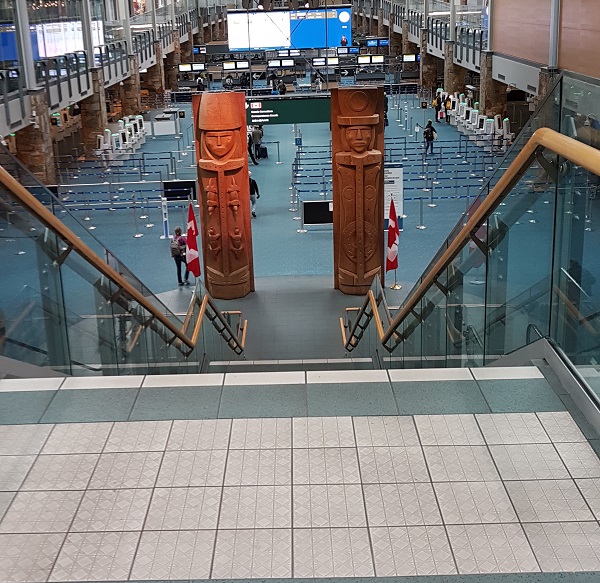 Then with tears in my eyes I turn to face the five-meter Musqueam Welcome Figures at the bottom of the stairs. Who knows when they might greet me this way again? 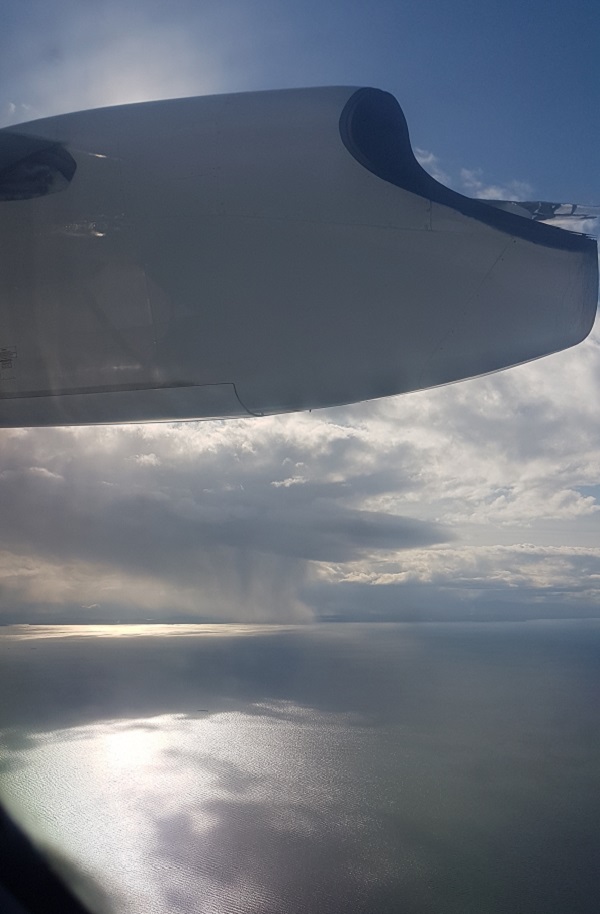 Then late in the afternoon of this second chance at a day I depart for Victoria into watery sun-drenched skies at the same time I was scheduled to leave Tokyo.

This entry was posted in Japan, Travel & Culture, This & That and tagged Leaving Tokyo. Bookmark the permalink.