Disposing of My Mother’s Things 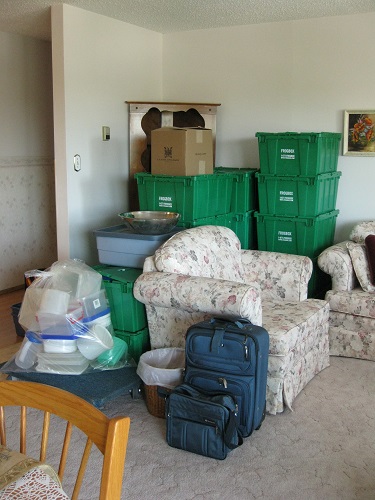 Removing the contents of my mother’s home, handling all her mementos and treasures has proven a problematic, even excruciating task. For one, I’d been after her to do some of it—at least the non-treasure stuff—for years. How many plastic yoghurt containers do you need to keep at any one time, Mother? Apparently, many.

Some people who were destitute during the Great Depression never seem to lose the tendency to keep a thing for its potential usefulness. Not that Mother was a hoarder. I suspect that she simply forgot that she already had two unopened boxes of bran flakes when she bought the third.

Some have no problem with the culling process. One suggestion from someone who shall remain nameless was to pitch it all from the balcony. Fortunately, there are people who love other people’s stuff. The foodbank gratefully took the bran flakes and five boxes of goods from her pantry.

More good luck, the condominium has a swap table for residents to leave items which have outgrown their usefulness in one household. No matter what you put on it, in short order the maggots descend and the table sits like a bleached bone in a matter of hours. One woman who happened to be passing by the moment I arrived could barely restrain herself from snatching my mother’s sun-bleached and badly beaten up plastic watering can from my hand.

Even greater good fortune, the Mennonite Central Committee (MCC) operates a thrift store within a kilometer of the condominium. They happily receive resalable goods of all kinds and turn them into wells for villages, loans for third world entrepreneurs, and among many other things, assist refugees (which my grandparents were when they entered Canada). Call it payback time. They’ll see good money from many of Mother’s beautiful clothes and fine things.

After family members had selected mementos, I loaded the condo’s contents into frogboxes (delivered with dollies to my doorstep by Frogbox Fraser Valley), and with the help of friends and siblings made several trips to the MCC Drop Off on South Fraser Way. Unsold furniture will be picked up later by the larger MCC operation on Gladys Avenue.

Not so. Every object, slip of paper, ribbon, and jewel passes through my fingers. I must decide whether to keep, donate, recycle, shred or toss. I am reminded of  lines from Pope’s mock epic The Rape of the Lock:

Not so. Whether gifts of love received for her wedding, birthdays and such, splendid paintings or numerous crafts, a grandchild’s scribbled sketches, letters, cards, her last grocery list of items never shopped for; each is no mere thing.

The way the word Paris conjures up an entire city and its history,  like a petroglyph lost to time, each is a magnificent story. Each a memento of a moment—its heartbreak or joy—the person with whom it was shared, and needing to be mourned.  A life-epic not to be mocked.

One Response to Disposing of My Mother’s Things