Getting Back to Ikebana in Victoria

I’ve been adrift since returning from Tokyo. Hence, no posts. My mind has refused to settle on anything to say. Many times I thought to get back to the untold stories from my time away, but there was never a spark.

After the “Welcome Home” balloons and while getting through the jet lag I got a work station set up in the garage for ikebana supplies. 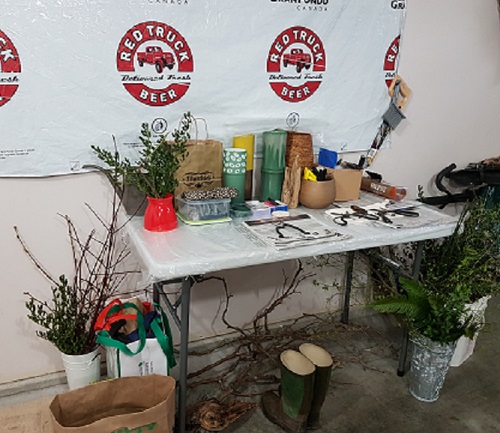 The various groups to which I belong cycled through their regular monthly meetings, and slowly I picked up the threads of my social and cultural life.  In addition, I found places where I can legally cut branches for arrangements and source driftwood which I will find useful as I advance. Sometimes, local thrift stores offer low-cost containers capable of standing in for the real deal, but very little truly steps up to approximate Japanese pottery and artisan glassware. I miss the readiness of all the supplies I need in one place. 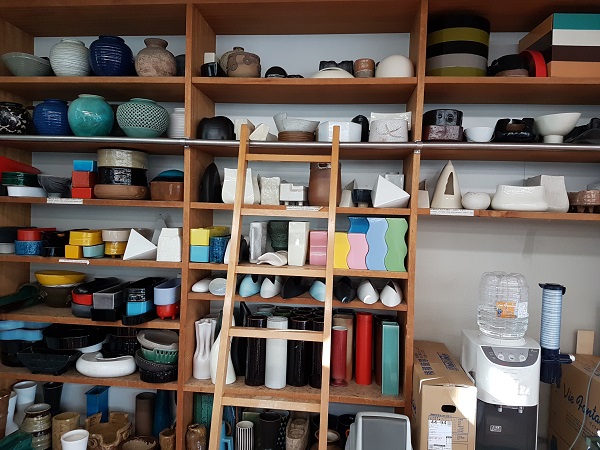 In February I started level three with a local Sogetsu teacher and her group of students; however, meeting twice a month is very slow compared to the minimum three lessons a week in Tokyo. I’m chomping at the bit. I deeply miss the constant challenge to create. 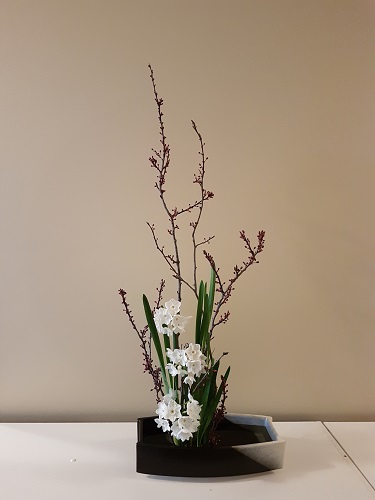 To make up for it I make arrangements outside of class, practicing either the previous or coming lesson or repeating something from levels one and two. Alas, the textbook is of limited help. Along with a few flat photographs it offers a paragraph or two of guidance.

Simply copying the photos is not on. I need to create my own vision. I’m in territory now where there are no set diagrams with correct angles to achieve; however, harmony of the earlier principles learned is part of the arrangement. That’s way more woo-woo and subject to all sorts of interpretation—and rules not in the textbook I often find out about only after a teacher points out that I’ve broken them.

Without a teacher’s input I have no reliable idea what I am doing brilliantly or incorrectly except for a feeling that something is amazing or a little bit off. However, I have been both right and wrong about such feelings before.  This week I was given gorgeous chrysanthemums which I combined with salal (Gaultheria shallon). This was my second attempt at the freestyle arrangement of two separate main stems in a single container theme for Thursday’s class. 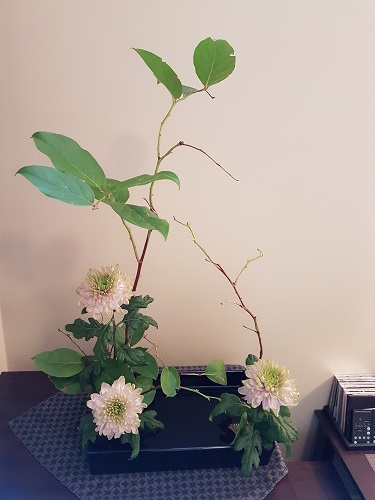 Though photos never do a living, three-dimensional arrangement credit, I’m not unhappy with it at this stage. No doubt a teacher would have some ideas of her own, but at the moment there’s no master here. In the process of creation my soul sings. That is enough. That is more than enough.

This entry was posted in Ikebana, Japan, Travel & Culture, This & That. Bookmark the permalink.