What do you dress as when you’ve unexpectedly been invited to a Halloween karaoke party and you don’t want to spend big bucks on a costume? I’d bought a cheap wig in Tokyo but left it behind as it was hot, uncomfortable and shed like crazy. 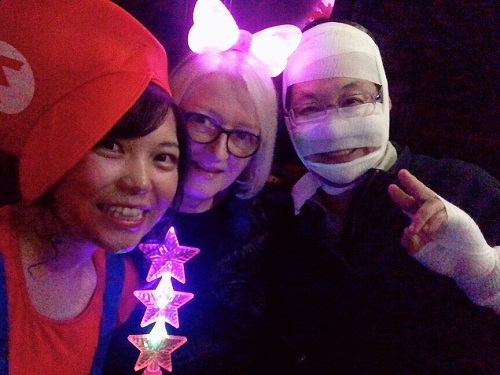 When I bought the wig I had found a little pumpkin hair clip to pin into it; however, my own hair is too fine to hold anything of that kind. I decided to clip it to my clothing and make lame excuses for not dressing up. Then while chatting at lunch about the party with my friend whom I was visiting in Yonezawa I got an idea.

In Japan the (separate) room in the house which houses the toilet has its own slippers. You leave yours outside the door and even though you aren’t walking anywhere but more or less turning around to face the door in them, you step into the toire srippa. When you are ready to leave you step back into your own and turn the others ready for the next person to step into.

Except that most non-Japanese forget at some point in their stay in Japan. They waltz out into the main living area with the toire srippa still on their feet—a matter for some mild derision.

On the spur of the moment I decided to go as “the gaiijin who forgot.” (Please note that I rarely use the G-word as some consider it as offensive as the N-word in reference to persons who are not Japanese. I normally and consistently use the term non-Japanese. In this instance, however, the phrase is what a Japanese person would most likely say in the context. Therefore I have made an uneasy exception.)

We popped into a local discount store and found the perfect, ghastly pink pair with the word “toilet” printed on them.

The party was well underway when we got to Oirase, a small, cozy karaoke bar in downtown Yonezawa. The owners had gone all out to decorate the bar for Halloween, and the attendees got into the spirit of the occasion.

The culture of cosplay is strong in Japan and my last minute effort was pretty lame compared to that which the others had put into theirs—skillful make-up, coloured contact lenses, wacky accessories.

The toilet slippers? Well, everyone (very graciously) thought that was pretty funny. I was given a flashing pink bow to match and we joined the crazy fun.