Posted on February 7, 2016 by Lynda Philippsen

A dark smudge of light warms the still black Coast Mountains at six. Half an hour later an intensely orange sunrise spreads slowly skyward and across the waters. Mt. Baker looks on from the northwest as the east shoots its glow laterally through the clouds and onto its once white slopes. Brilliance illuminates the room and kisses my cheeks as I write. 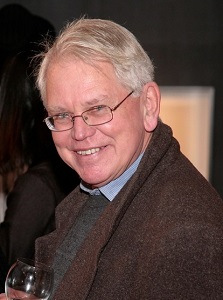 Dance the orange. It was the Rilke poem my mentor Lloyd and I shared with so much love. Today is the anniversary of the day that he left us for realms unknown, and this moment feels personal, his glorious greeting to me on this sorrow-tinged day. Ah! Projection! Isn’t it wonderful how we human beings can make comfort and meaning out of almost anything?

Even as I write these lines, the cloud blanket moves east and covers the incandescence, leaving only a few lines of orange. It was here—like love—a short while. Now all that remains is the blue on blue and gray on gray of a West Coast day.

Like my darling friend, the glory was here and now it is gone.

The Sonnets to Orpheus I, 15 – Rainer Maria Rilke from The Duino Elegies Trans. Stephen Mitchell

A few notes of music, a tapping, a faint

hum–: you girls, so warm and so silent,

dance the taste of the fruit you have known.

Dance the orange. Who can forget it,

drowning in itself, how it struggles though

against its own sweetness. You have possessed it.

Deliciously it has converted to you.

Dance the orange. The sunnier landscape—

fling it from you, allow it to shine

in the breeze of its homeland! Aglow, peel away

scent after scent. Create your own kinship

with the supple, gently reluctant rind

and the juice that fills it with succulent joy.

This entry was posted in This & That and tagged Lloyd Dykk. Bookmark the permalink.

2 Responses to In Memoriam: Lloyd Dykk