Recent news stories have covered nations refusing and returning contaminated materials intended for recycling to their countries of origin. In addition, multiple municipalities have begun to ban single-use plastic bags. Until recently, in my area of Canada clean plastics and tins as well as paper have been sorted according to type in blue containers. Waste which can be turned to compost goes in green bins and anything else goes to gray bins.  Not too onerous and not something I gave much thought once out of sight.

However, in Japan, the proper disposal of household garbage is more strictly defined. Different types of waste are put at the curb in plastic bags or bundled for pick up on different days of the week. Initially that can be somewhat confusing to non-Japanese not accustomed to the garbage protocols. In fact, stories in the Japanese press regularly cite cases of non-Japanese residents offending the citizens for consistently failing Garbage Disposal 101. But I didn’t anticipate that this might be a problem for me. 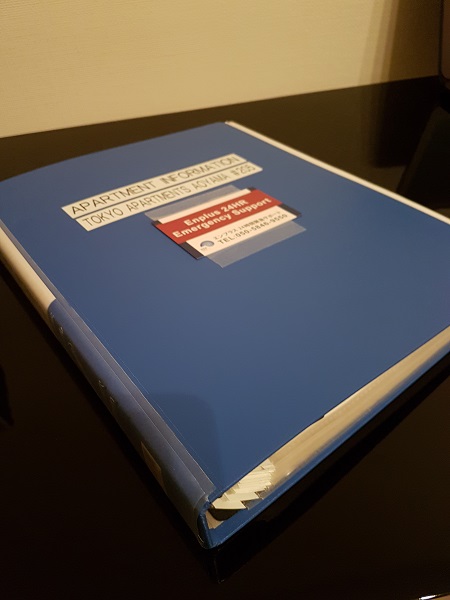 Therefore, as the first week settling in to my Nikko House apartment and starting school at Sogetsu Kaikan was quite overwhelming, I didn’t get around to reading all the directives included in the hefty instruction manual for my apartment immediately. Nor did I peruse the separate, colourful 10-page recycling guide with its cheer-leading cartoon characters provided by the Minato-ku district office. 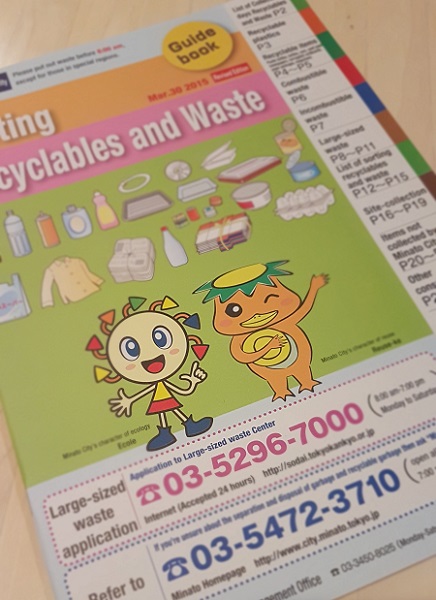 For the most part, I did as I normally do in my Canadian home. I carried my cleaned and sorted materials into the appropriate bins in the garbage disposal center located in the lower floor of the building. Then, before 8 o’clock in the morning the building’s caretaker put the waste out for collection on the designated days. 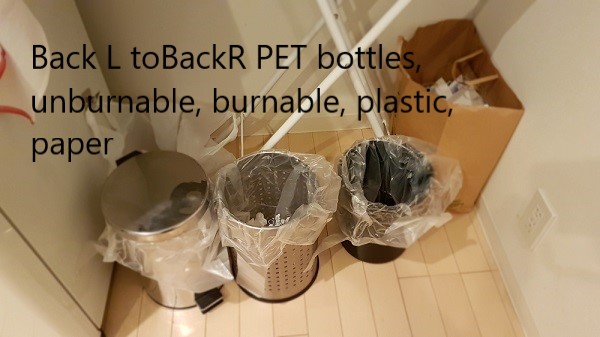 However, when I finally sat down to read the information I had been given, my methods scored a big red F. As counter-intuitive as it seemed and irksome as it was to do it, I was expected to purchase the clear plastic bags in the photo above to hold each type of refuse. Reusing opaque bags from the grocery store for this purpose as I had been doing was not acceptable. Oops! 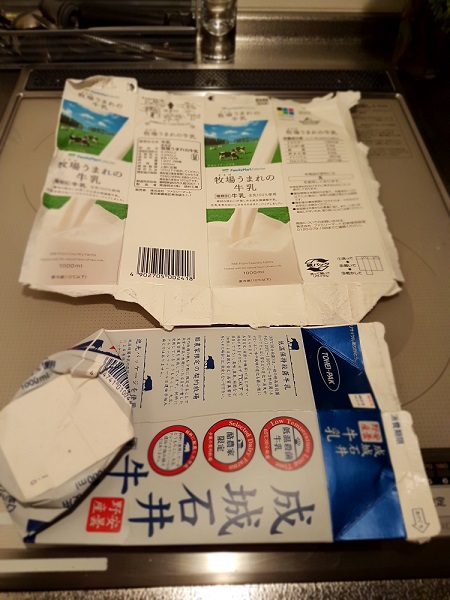 Clean, dry milk cartons which I squashed with a good stomping were to be cut neatly, laid flat and bundled with string. Oops again! Newspapers and magazines, too, had to be neatly bundled and tied for recycling according to type as illustrated below. Simply putting them into the designated bins loosely as I had been doing was not adequate. 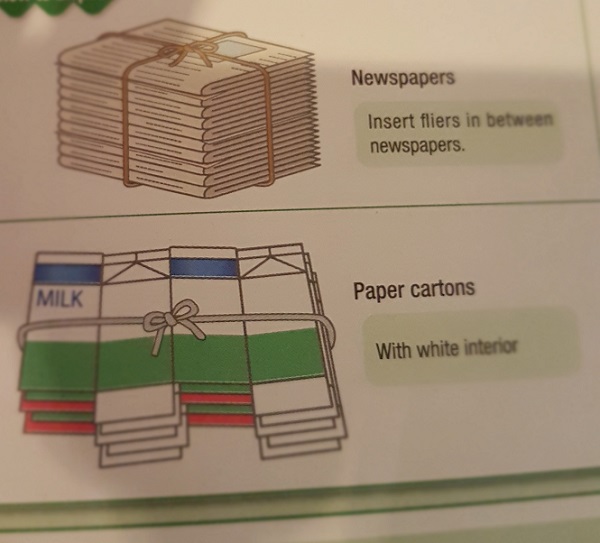 I’d also flubbed the strict protocols for disposal of PET water bottles which I’d simply transferred from my plastic bag directly into the downstairs bin. All wrong! The label, cap and the ring attaching it to the bottle needed to be removed and included with other plastic waste. 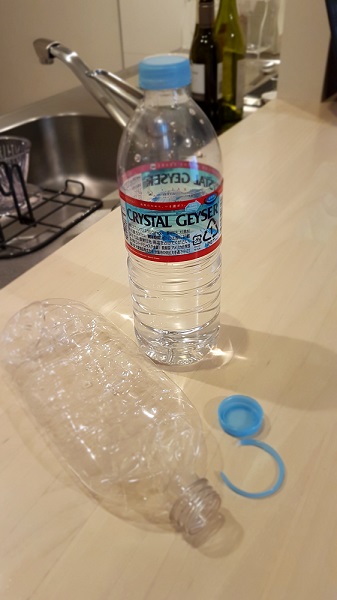 That done, the bottles also needed to be flattened. (Japanese house slippers are a great tool for this job!) I quickly learned to purchase PET bottles that had soft caps and rings as I had nothing other than a wonky pair of cheap kitchen shears (and liberal curses) with which to remove them.

Combustible garbage was more straightforward. Whew! I’d done just fine applying logic when sorting it from non-burnable trash. Fortunately, I was not using toxic materials. Nor did I need to dispose of appliances and or electronics. However, pages of detailed instructions for each type and lists of organizations which handled those was provided. For anyone not literate in Japanese, the English user-manual was a godsend.

In order to avoid time-consuming disposal of my garbage, I adjusted my habits. After the first week I chose to refill PET bottles with tap water and chill them in the fridge. I didn’t purchase English newspapers or pick up magazines I didn’t intend to keep. I also routinely took my own shopping bags to the grocery store where I purchased basic breakfast items. As I ate most of my other meals in restaurants, I almost eliminated the need to dispose of Styrofoam trays or plastic wrappers and containers. 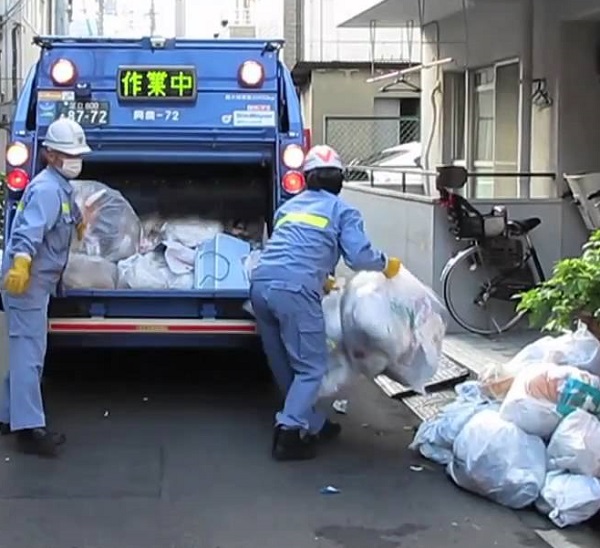 Even so, it’s extremely difficult to live without creating garbage in today’s world. Every convenience enjoyed comes with packaging that keeps it sanitary, fresh and easy to carry. Even more so in Japan where the cultural norm is to attractively wrap merchandise in paper as well as plastic and carry it home in another lovely paper or plastic bag provided by the merchant.

This was also true of flowers I carried home from school. The Japanese students wrapped and taped theirs in three layers—newspaper, fresh cellophane, and glossy white paper—before neatly tying them with Styrofoam strings. Though one of the teaching assistants showed me how it was done, I nixed that idea immediately. Any side-eye notwithstanding, one aspect of being a guest in Japan is the liberating option not to do things exactly the same way everyone else does. 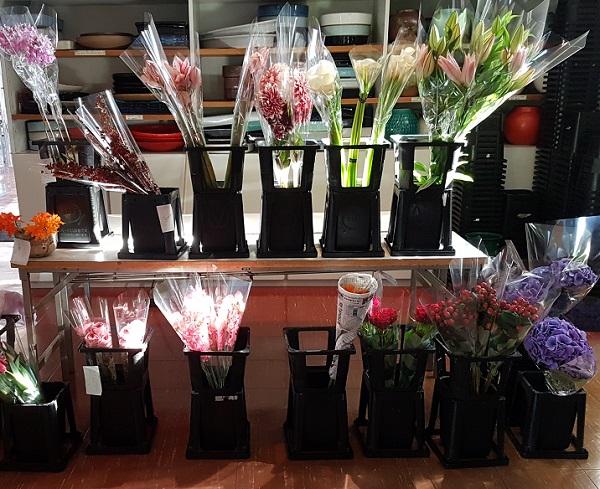 Rather than discarding it, I kept the cellophane wrapper in which the flowers arrived from the florist as well as the elastic bands securing them. At the lesson’s end I re-used those to re-wrap the blossoms and slipped them into a carrying bag specially designed for flowers which I purchased from the school’s supplies store.  This way I succeeded in not using three additional layers of wrapping as well as Styrofoam string.

Though the scope of how recyclable waste is managed in Japan after it’s collected is not the focus of this post, I learned a few new (and likely as futile) ways of handling my day to day waste. At the same time, I had no difficulty in sticking to my own methods when it was the more sensible thing to do.

Photo credits for photos not my own (the opening shot and garbage truck) were not available.

This entry was posted in Japan, Travel & Culture, This & That and tagged Household garbage disposal in Tokyo, Managing recycling and waste in Tokyo. Bookmark the permalink.