I walked the bamboo lined approach to Baisoin Temple on my way home between Gaiemmae Station and my apartment in Nikko House too many times to count the first three months I studied in Tokyo.

However, in spite of my interest in the temple as I knew Kengo Kuma was its architect, I hesitated to enter–much as I generally don’t enter churches or other public buildings anywhere else without an invitation or a purpose. It wasn’t a tourist destination, but a neighbourhood place of worship which often held several funerals in a day. Barging in Nosy Parker style didn’t feel comfortable. 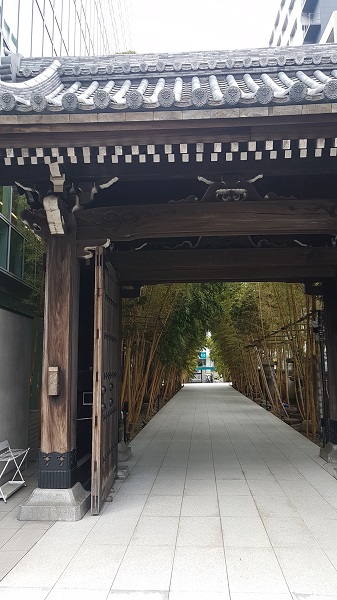 However, during my second sojourn in Tokyo, sensing a wasted opportunity should I choose not to check it out, my curiosity compelled me to peek through the window late one evening when the reception booth was closed. There I noticed a welcome sign and an English guidance brochure which was enough encouragement for me to drop in during a free moment to inquire. The charming attendant informed me that so long as a funeral service was not in session I was welcome to take a self-guided tour of the first and second floors at any time during open hours.

Described as Number 24 on the Great 33 Kannon Pilgrimage in Tokyo (though I couldn’t unearth a list of the others online), Baisoin was founded at this location thirteen generations ago in 1634 by the Aoyama family after whom the district and nearby Aoyama-dori (street) take their name. First destroyed in the firebombing of Tokyo during WWII, the temple was rebuilt. However, it became outmoded and the decision was taken to build again. The upgrades now include barrier free design and spaces for occasional public events. 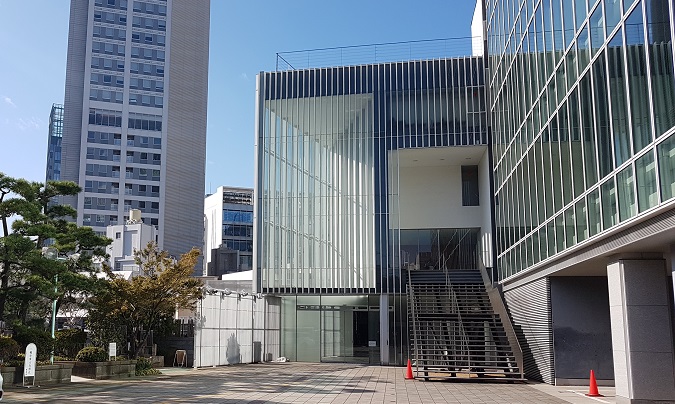 In 2003 Kengo Kuma, an internationally renowned architect whose office is across the street, was commissioned with its design. Though its approach along a bamboo-lined path and entrance through a heavy gate is traditional in style, the building looks nothing like the usual wooden neighbourhood temples. Instead, contemporary facades of glass and metal louvers greet visitors. 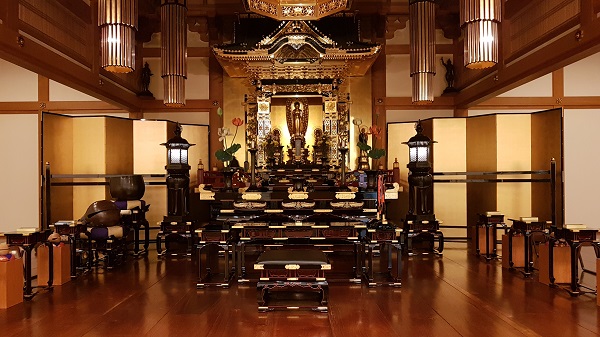 Though the interior iconography is consistent with other Buddhist places of worship, the interior spaces and furnishings are a fusion of traditional Japanese aesthetics and modern design. 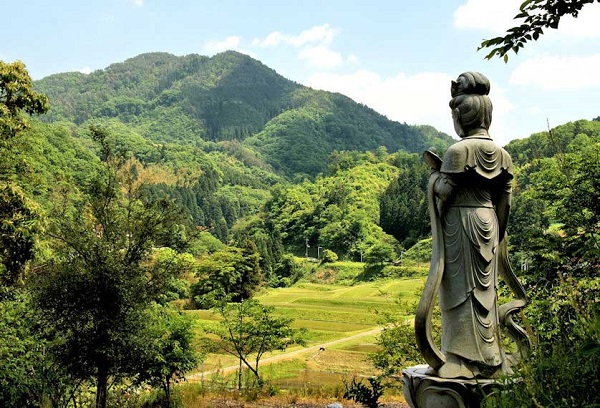 Baisoin is dedicated to the Kannon or Goddess of Mercy, a beloved deity, who towers over many countryside villages and is enshrined in various temples throughout Japan. Pilgrimages in her name are ubiquitous all over the country.  Kannon take on numerous forms according to local tradition. Early adopters of Christianity in Japan (which was outlawed) created Maria Kannon holding a child in order continue to bring their prayers to the Virgin Mary. Today, numerous Kannon statues are officially designated as Cultural Treasures.

As I enter the hall an involuntary inner voice which takes me quite by surprise greets the energy present here: I’m sorry I waited so long to visit you.  However, even more unexpected, I hear a reply: Never mind. We have watched over you all the same.

Though it happens on occasion, I’m not one to hear voices. However, this is not the only time I have heard the Kannon speak or felt her presence. 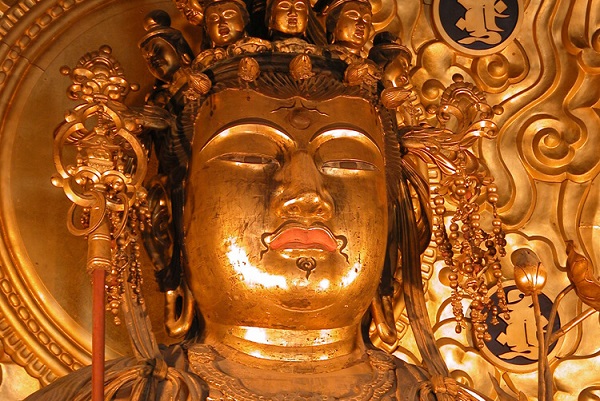 During my first independent journey through numerous areas of Japan, I heard her voice during a visit to Kamakura Hasedera, a temple which is often called Hase-Kannon.  To my surprise, without warning I found myself weeping as I stood below the 9 meter (30 feet) gilded statue. Then to my astonishment a voice said: Welcome home, my child.

Home. What is home? Where is home?

Throughout my life I have made homes in numerous types of dwellings. I have also been homeless in my own house.  Other times I have felt at home in places not my own. During those times when I have had no home where I was greeted with love, I had to find the one within my heart.

The Buddha states: With a quiet mind come into that empty house, your heart, and feel the joy of the way beyond the world.

And Guru Rinpoche writes: Peace in my heart, peace in my soul, wherever I’m going I’m already home.