Posted on November 24, 2017 by Lynda Philippsen

This week I had but one class at the Sogetsu School as the rest of the week was devoted to teacher workshops on the new Book 5 curriculum. With the basic forms and various slanted styles behind me, I began the first of the variations on those basics.

This time I worked alone without guidance from Hosono-sensei as she was busy with others. I didn’t seek verification from the assistant either. I read the directions and much like putting together a barbecue from a box or assembling an IKEA bookshelf, mindfully followed them.

When I stepped back to look at the completed work I checked it against my usual errors. The Soe and Hikai point toward my shoulders: check. Wait, wait wait! The Shin is leaning back! The first mistake I made in the first lesson. How could I have missed it?

Looking at the clock to ascertain how much time was left, I pulled the Shin and repositioned it. Then, copying one of the textbook photos I put the support for the Shin in place. Done. It looked all right—sort of—but I had no sense of certainty that I had nailed it.

Daily there are many things–in class as well as out–to navigate for which I have little sense of certainty or simply perceive differently than others. Much of the time I feel like the kid on this math test. 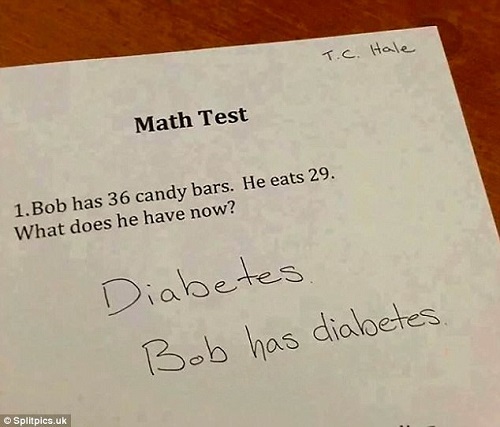 It’s a logical answer to a question that asks what instead of how many. However, it’s not the answer that’s desired. How do I follow GPS directions that advise me to go straight when three roads curve away from me, choose from 8 washing machine program options which are not translated, or quit hammering the ON button for the stove which needs to be held down for several seconds (but I use so infrequently that I forget in those intervals)?

When the teacher stopped by to critique my work, the first thing she noticed was that the Shin I had corrected was wrong. Guess what? It was supposed to go back—exactly where I’d had it initially. That’s why it was called a variation, she said. I needed to read the instructions carefully.

Rats. I had done exactly that, but in the time that it took to complete the arrangement I forgotten that very point: This variation is derived from Basic Upright Style, only with a change of the slanting of the Shin to 10 to 15 degrees toward the right rear.

So I did the Japanese thing. I said hai. A yes that means no. No, sensei. I read the directions brilliantly and had it right. (Alas, that no longer counts.) What I did was fail to remember what I’d read and applied knowledge gained from a past mistake to a new situation where the same approach didn’t fit. This was a variation of the old that, in essence, was new. I had to see it anew.

The support for the Shin was also incorrect. The teacher with a rhetorical “May I?” repositioned it as well. “Now, do you see?”

“Actually, sensei, I’m very sorry but I don’t see. One diagram in the textbook has it on the left side, the other on the right. The first week I learned that the space between the Shin and the Soe was supposed to be empty. Could you please tell me why I should fill that space this time?”

“Because you have to know what’s appropriate in each situation. Do you understand?”

“Hai. Shirimasu.” Of course I don’t understand. Otherwise I would have put it in the correct place and wouldn’t need to ask why. But I add, “Unfortunately, sensei, I don’t have your experience to draw on to make those difficult judgements. I’m a beginner.”

As all the other students are at much more advanced levels I thought a reminder wouldn’t hurt. Good play. Then I got a few comments about what I had done well: beautiful colors, excellent choice and combination of flower and flower this time, instead of branch and flower.

I took a photo of her corrections as I had a sense that the camera might show me what, in the moment, I still failed to see. Much like writing a sentence and removing it from a paragraph, after moving the flower I failed to remember what the composition had been before. 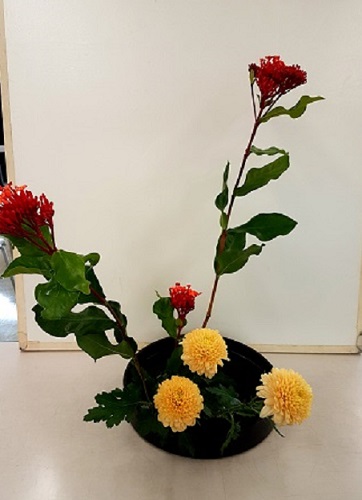 Sure enough. I saw it immediately. Her correction created two triangles within the arrangement. Mine did not. Lesson learned. The trick is to remember.

This entry was posted in Japan, Travel & Culture, This & That and tagged Learing from mistakes. Bookmark the permalink.