Posted on October 4, 2015 by Lynda Philippsen 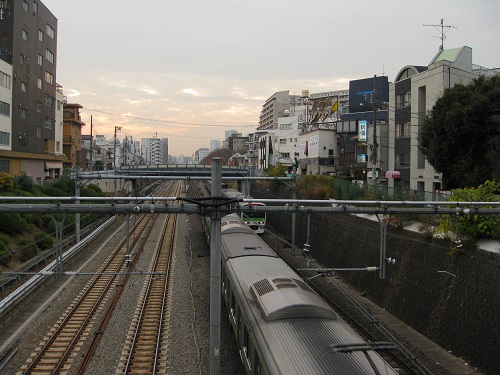 I’m in a little restaurant called Matsuda after having eaten a lovely bit of beef and a few vegetables served hot in a sizzling iron pot.

I arrived at Shin-Osaka at noon–on the dot. I know where my hotel is on the map and in the GPS in my head. It looks  like a cake-walk on paper. Only one problem. There are a whole bunch of railway lines in between me and where I am going. Sprinting into Shinkansen turf is not going to work. The pedestrian overpass which doesn’t appear to have an elevator doesn’t look appealing either.

Figuring it out on an empty stomach without resorting to a taxi (call me a mule) wasn’t going to work either. So there I was, looking for a coin locker outside the central exit and reading the English directions.

Someone tapped me on the shoulder as she passed by and pointed out the single remaining locker that fit the size of my case. Thank you! From where did that angel appear?

I attempted to feed the meter with the 500 yen fee. Would it take either one of the two 500 coins in my hand? Oh no. This little sucker (feel free to play with consonants) would only take 100s–of which I had four. I asked a passer by if he could make change. He explained that he needed the coins himself. Okay. No problem. Move to plan B.

I needed water, so I could break the 500 coin. But was there a ubiquitous vending machine anywhere in sight? Oh no. Only one with bags of fresh apples. Okay. Maybe my body was telling me something. I could live with apples I didn’t want.

I was about to plug in the 500 coin when I was tapped on the shoulder again. Here was the young man who couldn’t make change for me. He’d come back with a fist full of coins. Beautiful saviour. That prompted a good deal of domo arigato gozaimasu bowing from me (wasting even more of his precious time).

Now, well-fed, savouring the remaining wine, and considering the timely kindness of strangers, I consider the numerous ways we bless each other in the smallest ways that make more difference to each other than we can ever know.

It makes me want to do more similar small things. I may never know what moments of great grace they are.

This entry was posted in Around Abbotsford, This & That. Bookmark the permalink.

One Response to Postcard 11: The Smallest Things