Posted on October 6, 2015 by Lynda Philippsen

It’s hard to argue with that. Certainly no need to explain it. Live it. That’s all.

Now I don’t do selfies. However, this shot was the only way I could get one of the cutest bathrooms ever.  That will become a more detailed post some future day, but it rather fits today’s theme. 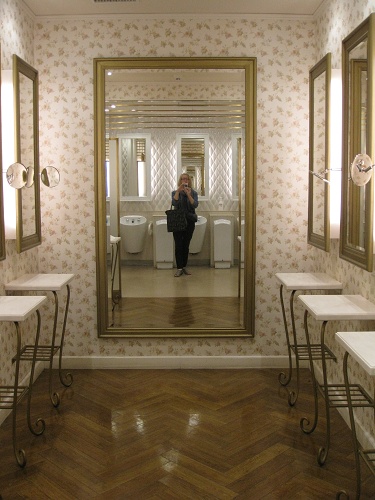 It also reminded me of those haunting lines from Rainer Maria Rilke’s “Orpheus. Eurydice. Hermes.” This is how Rilke imagines Eurydice’s view of Orpheus in that moment he is condemned to return because he has looked back.

But far off, darkly before the bright exit,

stood someone or other, whose features

With my departure from Japan approaching, as I consider the parallel in the image, I try to imagine the radiance of far off Abbotsford.  But right now, like Eurydice, I don’t quite get that.

This entry was posted in This & That and tagged Be radiance. Bookmark the permalink.