The Rapture of a Heart

Posted on November 9, 2020 by Lynda Philippsen 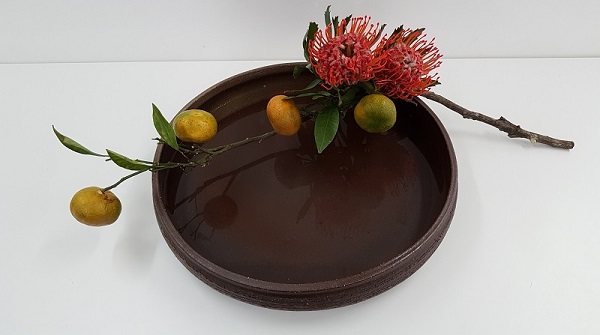 Early in September I opened an Instagram account (@lyndawow) and started playing around with posting this, that and the other thing. A rather random selection of whatever strikes my fancy any given day as I figure out how the platform works.

I also started following the Sogetsu site, as well as the accounts of various individuals who were my teachers at Sogetsu Kaikan, the Tokyo HQ. Though I never attended a lesson with the Iemoto (hereditary CEO of the school) Akane Teshigahara herself, I began to follow her Instagram account and to my surprise, she started following me as well.

Since I can’t take ikebana instruction to continue my Level 5 certification in Tokyo or in Victoria during the pandemic,  I began taking note of the various arrangements posted to other Instagram accounts which got a “heart” from the Iemoto for their instructive value.

Secretly I harbored a wish that some distant day one of my arrangements posted on Instagram might receive one from her.

Because the season is brief and I have a few photos of autumnal themed work I did at while studying at HQ, I decided to post a few of the best ones to Instagram between the other daily life stuff I have been putting up there.

This morning I posted the above photo of a mikan (Japanese orange) branch with pincushion flowers fixed without a kenzan (pin frog). Less than 10 minutes later a notification came in—the first “heart” was from Akane Teshigahara!

What a rush of joy flooded my being. I haven’t felt that since leaving Tokyo when many times after class I would return to my little apaato–Tokyo Tower a glowing orange  exclamation mark on the indigo night–in a state of incandescent rapture. Sigh!

This entry was posted in Ikebana, This & That. Bookmark the permalink.

One Response to The Rapture of a Heart