Book Review: Japan and the Culture of the Four Seasons by Haruo Shirane

After  reading Japan and the Culture of the Four Seasons: Nature, Literature and the Arts by Columbia University professor Haruo Shirane, anyone interested in Japanese culture will learn how the four seasons are foundational to what it is to be Japanese. This cultural underpinning is a construct because there are actually five climatic seasons in Japan, but the rainy/monsoon season (like other disagreeable facts) is conveniently overlooked in the service of art.

Shirane details how this paradigm has evolved over historical periods to inform all aspects of Japanese culture. He is thorough, articulate and provides superb footnoted references. Japan and the Culture of the Four Seasons is an enlightening read for anyone with a deep interest in Japan. 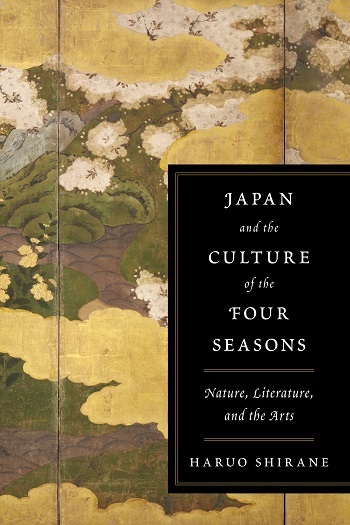 I would call it essential for any non-Japanese who might aspire to “read the air”  as numerous codified elements that imbue Japanese art, literature, craftsmanship, and the myth of Japan’s harmonious relationship to nature are explicated in the book.

His book talk (available on YouTube) is a thorough overview of the book and probably enough to satisfy most people’s curiosity. However, I derived a much deeper understanding for having read the book. Because of its thorough and nuanced attention to detail and relentless repetition, I think some readers could be inclined to throw the book against the wall yelling: Enough already. I get it. Japan has four seasons. So do other countries. So what? How long can that be interesting?

However, for me, reading was not unlike serving a Japanese apprenticeship—doing the same thing again and again 100,000 times until it runs on some subconscious autopilot. That very repetition provided what centuries of codified imagery and poetry may have done for the Japanese—registered it in their DNA.

After reading I felt I had received a genetic implant in literary form. In fact, by the book’s conclusion I better understood how it is that Japanese people “read the air” while non-Japanese remain clueless. It’s a shared code (of which the four seasons are one part) which allows them to understand each other with little or no speech.

I recognize this from experience as Mennonites have a code as well. Their cue to the code in German or Low German is we speak through the flowers if they wish to overtly signal the switch to coded speech. Russian Mennonites especially, put this shared subtext to good use. When incarcerated in Stalin’s gulags they smuggled coded letters to relatives who had made it out to the West. But I digress.

Japan and the Culture of the Four Seasons, finally allowed me to understand why I was often wrenched in deeply poignant ways by the experience of some vista or cultural property or phenomenon in Japan. I now realize that like the five seasons conveniently condensed to four,  what I am looking at has been manipulated and cultivated according to aesthetic rules, principles and hierarchies that reach back for centuries.

The artists, artisans and designers have contrived to provoke this intense response. Just as a composer moves my body to polka or waltz or my chest to constrict through the medium of sound, thanks to Haruo Shirane’s Japan and the Culture of the Four Seasons I recognize that my experiences in Japan are the normal responses of a sensitive person to art.

This entry was posted in Japan, Travel & Culture, Reviews and tagged Haruo Shirane, Japan and the Culture of the Four Seasons. Bookmark the permalink.