Posted on December 8, 2013 by Lynda Philippsen 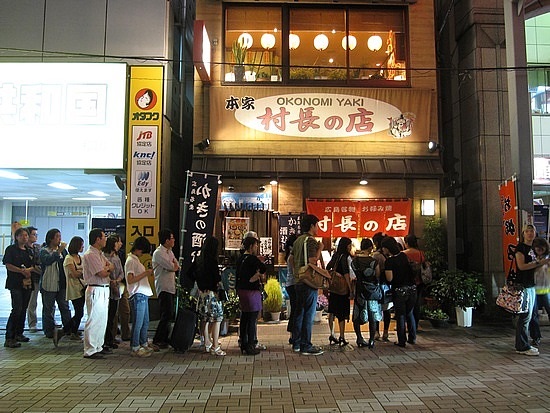 Line up for an okonomiyaki restaurant. Photo Credit Lami Japan.

After a day at the Hiroshima Peace Memorial Park and Museum looking at death and devastation, distress seems to have numbed my appetite. I’m not particularly hungry at day’s end. Perhaps that’s why I pick okonomiyaki for dinner—a dish I’m not all that keen on in the first place.

Earlier, a friend introduced me to the Manju (fried soup) version and ordinarily I wouldn’t eat it twice in as many weeks. Still, I feel I would be remiss if I didn’t try the renowned Hiroshima variation containing noodles while in town.

Okonomiyaki is a fritter-like dish cooked on a griddle. It is often described as a cross between a crepe and a pancake, as Japanese pizza or even an omelette. All of which are inaccurate and unhelpful comparisons.

Attempts to explain the dish take almost as much time as making it. To complicate the explanations, there are numerous variations of okonomiyaki from place to place throughout Japan.

Often okonomiyaki is touted as a healthy meal because it is laden with cabbage. However, slathered with mayonnaise and dark-sauce (essentially a mix of salt and sugar); filled with carb-high noodles, pork belly and heaped with salty fish-flakes; it’s not quite good for you (at least not as regular fare).

After a bit of wandering about I find a food floor of nothing but okonomiyaki stalls. Hot grease-smoke hangs in the air and I know I will have to wash my hair and my clothes at evening’s end. As I circle the area a couple of times looking for a promising spot, I notice that even at this early hour there are numerous businessmen crowded around most of the griddles. Tonight I don’t have quite enough moxie to tuck in between them.

However, at one stall a heavy-set woman in a grubby apron with no customers fusses about. At my approach she makes no effort to invite me with a loud irasshaimase as some of the other proprietors have. I wonder: Is this a warning sign? Is the food no good? Does she dislike foreigners? Or maybe, with a long evening on her feet ahead of her and troubles of her own, she’s just as deflated tonight as I am.

I decide to give her the benefit of the doubt rather than brave snuggling elbow to elbow with the salary men. I order a pint of beer, ask for her specialty and settle in to watch her cook. 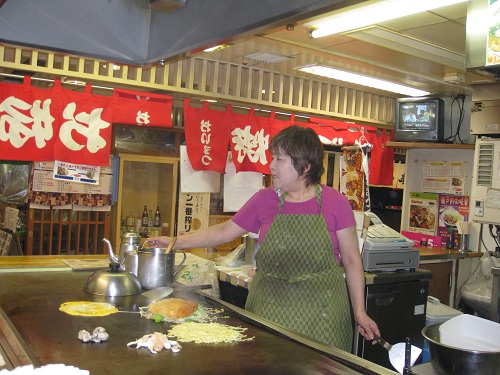 My okonomiyaki being prepared

What was I thinking? How can I eat all the stuff she’s got going on the griddle? Is it okay to ask for a doggy bag if I can’t finish? I hope she won’t be insulted if I can’t eat it all. But how will I communicate all that to her? If possible, I plan to take it away and throw it out where she can’t watch.  This is becoming more complicated and a lot less relaxing after a difficult day than hoped for. 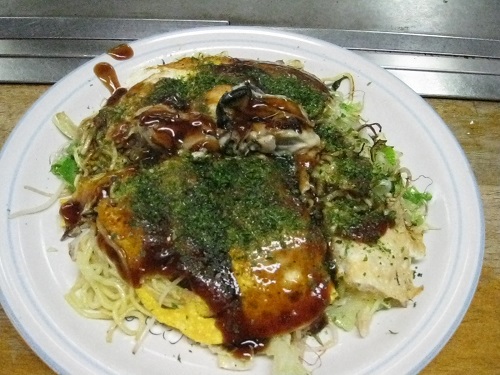 When she places the finished okonomiyaki slathered in dark sauce in front of me, it fills the entire plate. Though the result isn’t pretty, I tuck into the first bites which are scrumptious. I let her know with an audible moan and say oishii. But she doesn’t have time to enjoy my appreciation. Groups of hungry customers take their places around the griddle and she’s busy pouring beer while taking orders.

Halfway in I find I’m hungrier than I’d thought and will quite easily devour the whole thing. Once I realize I won’t have to insult the cook, and the alcohol begins to dull the day’s remembrances, I begin to relax. Remarkable how the body’s impulse to life defies tragedy—even one as great as a nuclear bomb. The life force asserts itself, and it is delicious.