Posted on December 15, 2013 by Lynda Philippsen 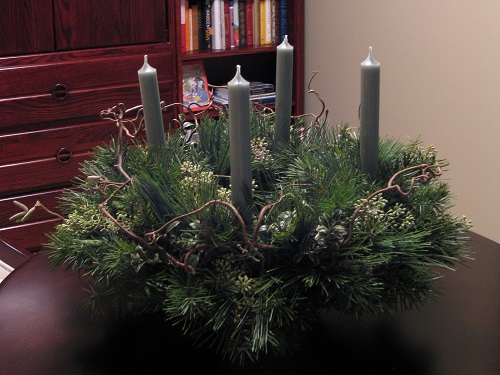 Today I again light a candle on the Advent wreath, a ritual I have observed since childhood. On each of the four Sundays prior to Christmas Day I pause in darkness to light a flame—one for each Sunday.

My ritual is secular and aesthetic. I pause to drink in the beauty of light and ponder its archetypal nuances. One small flame—no matter how large the room—burnishes the edges of furniture which earlier appeared to be dark. Walls warm with a new, gentle radiance; everything shimmers as the candlelight flickers. Stemware (and whatever it contains) glitters with constellations. 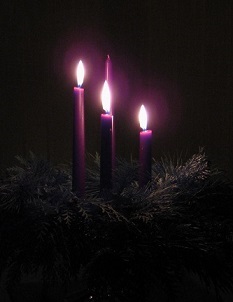 Along with many other rituals and observances on the liturgical calendar, the church plundered pagan practices and gave them a sanctified veneer. In the Christian faith-tradition the wreath greens and the candles are freighted with symbolism related to the anticipation of the Christ-child and ultimately his return.

However, long before the existence of Christianity, Northern peoples created various rituals with fire and green boughs to ward off the deepening darkness, dispel the wrath of the gods and anticipate the return of spring as the solstice approached.

The ancients (we like to presume they were primitive), whose illumination depended on torches, fire logs, embers, oil lamps and the moon, had a different relationship with darkness than we who have known electricity all our lives. But like them, generating light is fundamental to our various mid-winter religious traditions, seasonal decorations, and festivities.

Ever since Prometheus flouted the gods (twice) to bring fire to mortals, the flame has been an integral and dynamic part of the human creative force: the forge, the stove, the engine. With fire we defy the capricious will of the heavens. Whether we ward off the growing night with sodium street lamps, blue-screen glow, another log on the fire or one more flame, we remind ourselves that no night (and no winter) lasts forever.

This entry was posted in This & That and tagged Advent Wreath, Winter solstice rituals. Bookmark the permalink.