Posted on December 22, 2013 by Lynda Philippsen

Though in some circles Christmas has become the holiday that dare not speak its name, I send Christmas greeting from my home where I sit beside the Christmas tree while enjoying the Christmas lights and various Christmas trimmings. No, not winter or seasonal or holiday, but Christmas. 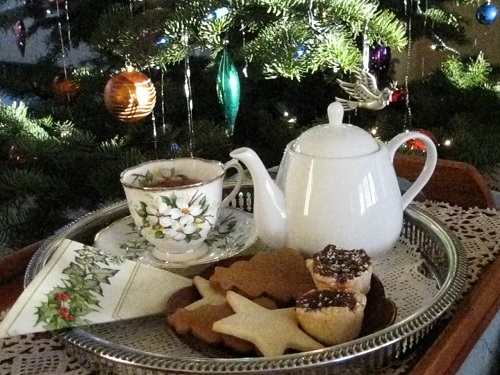 Christmas in Canada, as everyone likely knows, originates in a faith-based celebration and is a statutory holiday which falls in December. But Christmas has also become highly secularized, commercialized and often happily adopted by people worldwide who do not celebrate any of the tenets of its faith.

However, this time of year also has a number of other faith-celebrations, some with significant rituals important to the celebrants as well as light, social gatherings, food and drink. These do not receive statutory holiday status, but are celebrated wherever cultural and faith-groups gather. In multicultural Canada we embrace almost everything. Thus we might see Diwali lights strung on homes well before the Christmas lights appear or menorahs in windows.

Strangely, for a country that has embraced many people and their customs and made it official policy (Multiculturalism), it has become lexically unfashionable in some circles to use the word Christmas. Apparently, to do so is somehow offensive or insensitive to those who do not celebrate it. So we must have holiday parties, winter holidays, seasonal celebrations instead. How silly.

I can say how silly with some authority. I was raised Mennonite. Common celebrations such as Hallowe’en trick-or-treating or belief in Santa were not permitted. Dancing, make-up, revealing clothes, TV, movies, drinking and smoking were not allowed either. As much as you might long to join in, you also learned to deal with the fact that by an accident of birth you were a different duck than some of your friends and not allowed to join in.

That’s hardly grounds to take offense over people who can and do celebrate differently. Likely that’s not much different for anyone else who must meet certain cultural or faith-based norms or must observe certain taboos. Generally, the group understands and is fine with distinguishing what’s their stuff, not ours.

Besides, if Christmas is a word not permitted to name a holiday, then other words—New Year, Thanksgiving, Hallowe’en, Diwali, Hanukkah, Kwanzaa or Ramadan to name a few—should be scrapped as well. But try saying “Season’s Greetings” or “Happy Holidays” in return when you are wished “Happy Thanksgiving,” “Happy New Year” or “Gung Hey Fat Choi” as I have done in the spirit of equality and experiment. It only invites quizzical stares and suggests the possibility of cognitive impairment.

Recently two CBC radio broadcasters kicked off Hanukkah offering traditional prayers in Hebrew during their regular show. Was this offensive to anyone who is not Jewish? Under the rules of the lexical police pertaining to Christmas—if applied fairly—it should have been.

Unlike Christmas, Hanukkah has never been secularized to be inclusive. Plus, prayers were offered without translation into either of Canada’s official languages. Was there an indignant public outcry? No. Why would there be? Under multiculturalism the observance or discussion of significant days in numerous cultures is embraced. Listeners who didn’t know learned something about Hanukkah that day.

Similarly, those whose faith-culture includes Christmas—even if they observe it in the most secular way—should be free to celebrate and greet others in the language of that tradition without being censured for cultural insensitivity.

To those who suggest otherwise let me say this: Bah, humbug–and a Merry Christmas!

This entry was posted in Essays, Fiction, Poetry and tagged Merry Christmas. Bookmark the permalink.