Posted on November 30, 2013 by Lynda Philippsen

It doesn’t happen often, but today a trio of women my age travelling on the electric street car which runs from Hiroshima Station past Hiroshima Peace Memorial park overcome their shyness and speak to me.

Where am I from? How long have I been in Japan? Am I alone? When I say yes to this question they chorus in collective surprise. Eeeehhhh? Why have I come to Hiroshima?

To visit the Peace Memorial Park and Museum.

They solemnly consider the answer. But the limit of our fluency in each other’s languages has expired, and I have arrived at my stop.

As is usual in Japan, the approach to the park is indirect and the A-Dome though palpably present, not yet visible. I round the corner and there it stands, this relic bearing witness to that moment which took warfare into the Atomic Age. 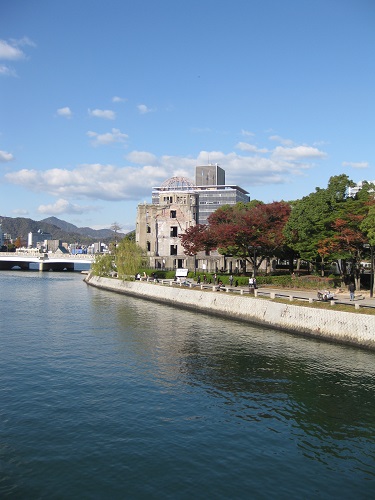 View of the A-Dome from the park 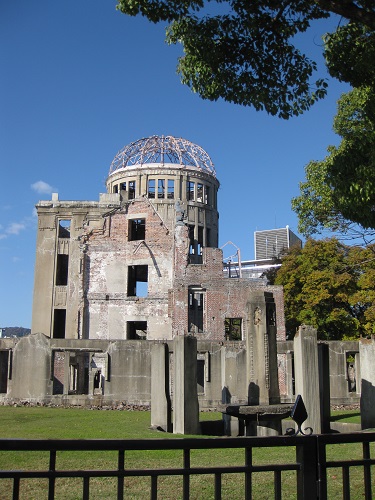 On the sidewalk alongside the river a few elderly people are seated on collapsible chairs. Propped beside them are signs indicating that they survived the bombing, inviting visitors to speak with them.

The park is a vast area with numerous memorials of various kinds. What strikes me first is the serenity and harmony of the landscape: mature trees, vast tracts of lawn, flowing water, sculptures, fountains.

Crickets stridulate loudly. The heat of summer past has scorched some of the lawn in large black patches—like a scar.

Anyone who was not taught what happened here would never know.

Within the museum itself, though the rooms are crowded, people are eerily silent. The humblest artifacts of that day speak the loudest. A burnt child’s bicycle, broken eyeglasses, stopped watches, notebooks, letters, charred utensils of daily living, tattered scraps of clothing. Kannon the Goddess of Mercy reaches out to bless with severed arms. A bronze Buddha half melted away sits as he always has with defiant equanimity. These objects move me more than the scale models or footage or recordings which detail what happened.

This is the human and spiritual face of war (no matter whose war when or where) which remains quite outside ever-shifting alliances, bombastic speeches, parades or insidious propaganda.

In this place ordinary people (through no fault of their own but the accident of their birth) were in the wrong place at the wrong time on the wrong day. Words fail. To them I offer my silence—an inadequate tribute—and pay my sincere respects.