I can spend hours in Japanese depaato (department stores), a pastime I keep in reserve for those jet-lagged, rained-out or low-mood days. Each time I return to Japan, it’s an addictive way to ease into the abrupt change in culture, habits and time zone; a way to relax, move about and stay engaged without expending much energy.

I mention it, half-apologizing for enjoying this secret (up until now) pleasure to a friend. Somehow, in my mind browsing through Isetan, Takashimaya, or Daimaru doesn’t rank with exploring Nishiki Market or sucking it up for another heritage site. Much like choosing a Western-style hotel over a traditional ryokan, it seems not quite adventuresome enough.

However, my friend assures me that a depaato is a mercantile microcosm not unlike a museum which truly reflects Japanese culture. The main difference is that it contains artifacts of the present rather than the past. In my case, it means artifacts of the future—trends I can expect to see in Vancouver Metro in about 5 to 10 years’ time.

Often artisans whose work is for sale in the store temporarily set up shop and demonstrate their craft for the customers. Isetan and Takashimaya also contain art galleries which feature fine exhibits throughout the year.

Department stores also give a unique view into the target demographic of each store and shopping habits of people. At first I couldn’t quite understand the buzz or the mob which had gathered in an orderly queue on one floor of Isetan. Eventually I figured out that it was a sale. Customers were let into the roped-off sale area a few at a time, in accordance with the numbers which were leaving. And though they swarmed like bees in a hive, there was no mass stampede—at least not in this high-end depaato—as there sometimes is in the West. 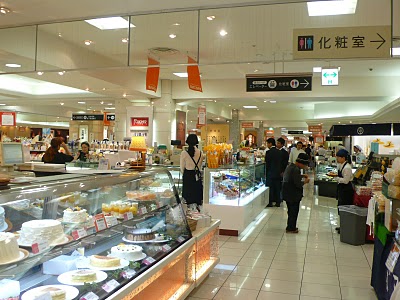 In addition to everything one could need to fit out a household, Japanese department stores have extensive food floors (usually in the basement). These provide an overwhelming number of options from luxurious chocolates and confections to freshly-prepared take out items and simple to lavish bento (complete meals in a box). 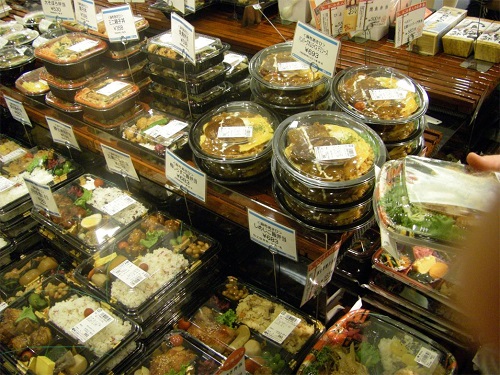 It’s also common for Japanese depaato to have resutoran-gai, which are entire floors devoted to various top-rate restaurants all in one convenient location. Displays of menu items in the windows let you know what’s offered inside which is perfect for those who can’t read Japanese. Though in the absence of English it’s sometimes fun simply to point at an item and let yourself be surprised.

That once got me an appetizer course of assorted salted intestines and mains of bonito, red snapper and squid offal when in 2007 I tried o-banzai cuisine at Banzai in the Hotel Granvia resutoran-gai. Surprised? Oh yeah.

That puts short shrift to any notion that putzing around department stores or swanning around fine, Western-style hotels can’t deliver adequate doses of culture shock. Believe me, it was adventuresome enough. And yes, I ate it all–with only fine sake for help. Bigger surprise, it was delicious.