Posted on February 19, 2015 by Lynda Philippsen

I will continue to share reviews of programs commissioned by Japan International Broadcasting  (JIBTV) from time to time. Please note: The content of this post is the sole property of JIBTV and may not be reproduced in any way without consent. This content is posted with permission of JIBTV.

There’s an ongoing fascination with Japanese washrooms and toilets—both the traditional squat in back catcher position ones and the Western styled options which I wrote about earlier. I thought I’d written pretty much all I had to say on the subject, but episode 21 of MoshiMoshi Nippon proved me wrong.

The show wraps up with Professor Nakamura, a rather tousle-haired former rock musician, making an appearance to chat about some facet of Japanese culture as he does near the end of most MoshiMoshi Nippon episodes. This time he gives us even more insight into “bathrooms” in Japan.

Here there’s a bit of a hiccough with translation. When speaking of the public toilet and sink facility without a tub, that’s a washroom. However, what he mostly talks about are settings for Japanese toilets or washlets as they are called in Japan—the computerized bidet version Toto popularized in the 1980s. (Depending on the model, these can be had for about $2000 to $5000 in Canada.)

Describing their aesthetics, functionality and entertainment value, the professor shows the viewers various creative options found in Japan. One washroom has a computer screen at the entrance showing users which stalls are empty, thus saving time spent nudging doors and bothering other people. Another has special, luxurious make-up areas for women. One unbelievable toilet is surrounded by an aquarium, another set in a Zen garden, and one more sits on the top of a ski run with a view of the slopes. Definitely unique. Possibly only to Japan.

But most fun of all are the game-urinals. These definitely qualify as some of Japan’s “geeky goodness” but only for the testosterone set. Users point, shoot and play. (Which women will note does nothing to encourage little boys of all ages to be neat about their business. Grrr!) At the end, their whiz prowess is scored. 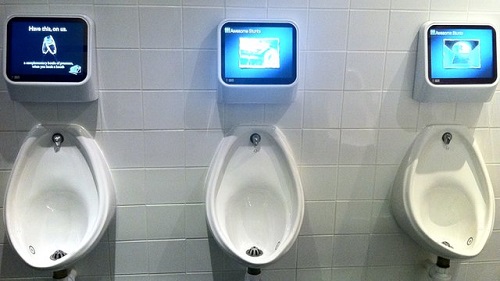 In Japanese culture a happy, innocent playfulness of childhood carries over into adulthood in a way that it fails to do in the West. This is a perfect example. It reminds me of my pre-pubescent male cousins and brothers gorging on water, lining up and doing much the same low-tech thing from the roof of the outhouse.

But seriously, these urinals really should be part of the future 2020 Olympic facilities, thus allowing visitors to Japan to enjoy their very own chance to win gold for gold.

This post references only part of MoshiMoshi Nippon, Episode 21 on Takoyaki which you can view here. I’ll be posting the Takoyaki portion soon. The professor’s segment begins at 20:25 on the video.

2 Responses to More on Japanese Toilets