Terrace House is on Netflix

Posted on February 9, 2017 by Lynda Philippsen

The last time I was part of a group where everyone minded each others business was before adulthood. During that time I belonged to a church; a small, conservative, community of Mennonites who despite their unique culture, good works and upstanding qualities felt compelled as a group to regulate the behavior of others. Sometimes that meant great pressure on members to conform and often to make public apologies for transgressions.

In that respect, even though it’s set in present day Japan, I found the world of Terrace House: Boys & Girls in the City oddly familiar. Made by Fuji Television in cooperation with Netflix, this Japanese reality show has a twist. There is no script.

The cameras roll as six strangers—three men and three women between the ages of 18 and 29—share a stunning house and enjoy free use of automobiles provided for them. The dramatic arc is the day to day stuff of life. Who cooks, who does dishes. Who does or doesn’t get along with others, and the consequences of such interpersonal friction. The members set rules, eat and socialize together while maintaining their daily working lives or studies. 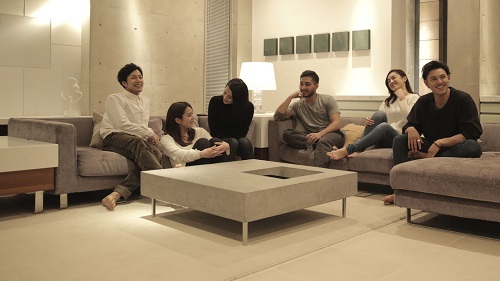 The resulting footage is shaved down to 30-minute episodes by clever editing and presented together with great music. (A playlist is available on Spotify.) This is complemented by insightful commentary from a group of well-known Japanese comedians and actors who watch the episodes together. Then like a Greek chorus, they interrupt with their take on developments. The result is crazily compelling and addictive. 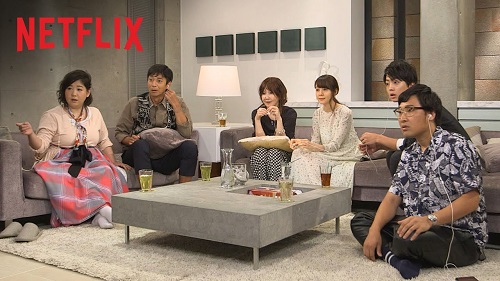 The house members are exceptionally attractive people: models, would-be actors, dancers, designers, and other creatives. Each person is working with varying degrees of success toward personal aspirations just like most other people. However, at some level most have already distinguished themselves before they joined Terrace House. They have chosen the experience as well as the global exposure that comes with it for a variety of reasons.

Of course, some are also looking for romance. They are singles living together unchaperoned (if you can forget about the cameras) with other super-hot looking members of the opposite sex.  Thus their day to day interactions buzz with underlying sexual tension.

Terrace House: Boys & Girls in the City tests the characters and emotional stability of the participants, exposes their transgressions and highlights moments of exceptional sensitivity. More than that, it reveals how social conditioning and mores work to govern Japanese behavior.  The elegance of Japanese social graces is immediately apparent. House members bow to each other, constantly acknowledge each other and express their thanks for the smallest things—all the time—even in moments of deep personal distress.

When it comes to courting, there are established and codified rituals quite unlike those in the West. Public displays of affection or even gestures of comfort such as putting an arm around someone are not that common in Japan. Therefore, holding hands in public signals the status of a relationship and indicates an intention. A chaste little kiss is a very big deal.

In a world of largely American reality TV with its sleazy excesses (from the Kardashians to the highest office in the land), Terrace House: Boys & Girls in the City is refreshing for its restraint.  More than once the commentators use the word pure in describing the appeal of an individual. When was the last time you heard that in a conversation?

Over the course of the Terrace House series there are many compelling scenes. Some leave the commentators momentarily speechless or jubilant or in tears. After one poignant moment, one of the commentators is awestruck and remarks that you couldn’t write a script like that. No one would believe it. But this was real.

However, the absence of a script is somewhat misleading and only partly true.  What is often revealed as the series progresses is a tacit and deeply ingrained cultural script. At its fundamental core is what it is to be Japanese.