A Weekend in Yonezawa, Yamagata

Posted on November 7, 2018 by Lynda Philippsen

Cloud streaks caught the setting sun and bathed the valley in soft light as I disembarked from the Shinkansen at Yonezawa Station on a late October Friday afternoon. The crisp air was faintly redolent with smoke–like incense–as farmers had burned the rice stubble from their fields earlier that day. I had arrived in Japan’s countryside or satoyama with its own distinctive nature and culture. 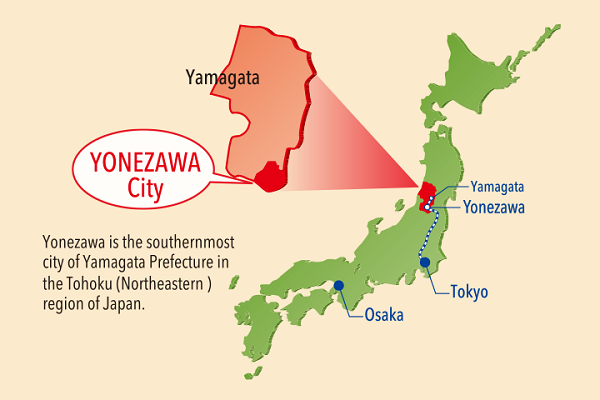 Though southerly Tokyo was still green and had finally started to cool off in proper autumnal fashion, in Yamagata prefecture’s mountains koyo (autumn leaf viewing) season was already in full swing. Some places were said to have already peaked.

When I lived in Tokyo last winter my friend Derrick who now lives and works in Yonezawa encouraged me to visit; however, I did not have the requisite clothing for an area that essentially becomes a freezer during the winter. Snows to the second storey. Roads of solid ice. That sort of thing.

But during the last week of October Sogetsu Kaikan had cancelled my classes for a major exhibition giving me a window of time to head north. On Saturday morning Derrick picked me up from my hotel and we embarked on an adventure through Yonezawa and outlying areas.

Before departing by car we walk through the nearby Uesugi Shrine gardens in the morning sunshine. 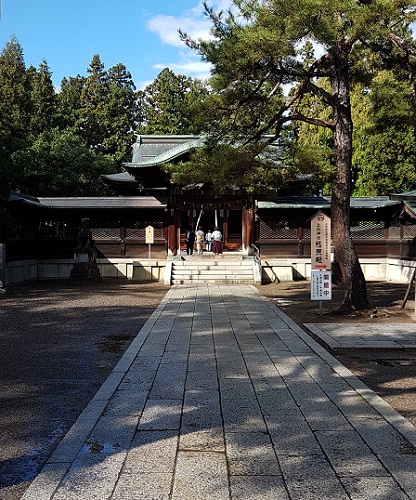 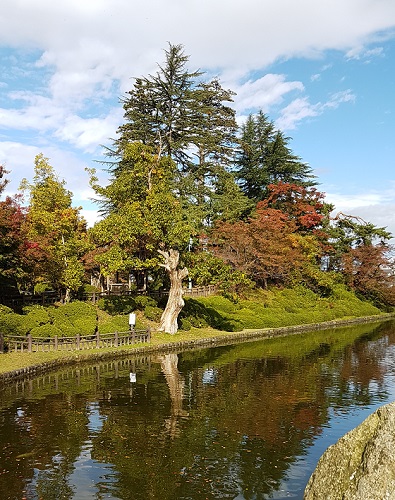 Then we hop into the car for Tengendai-kogeni a a popular  hill for skiers and snowboarders in the winter months. There we take a gondola up the mountainside. The brilliant foliage covering the mountain hillsides, beyond superlatives or anything a phone camera can render, seems to float past as we ascend. 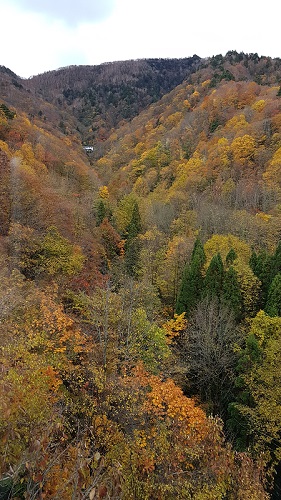 At the top we step outside for a look around, but a fierce wind nearly blows us over. 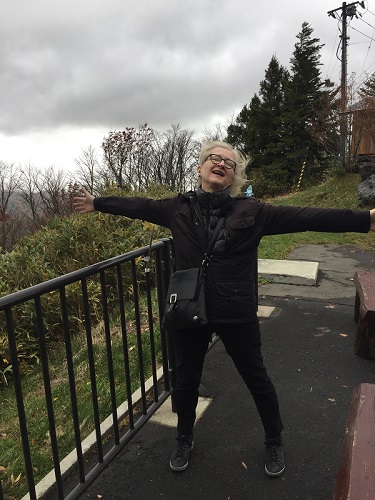 Moments later we are hit by hard rain. The hillside was golden. Now it’s gone, shrouded in dense mist. 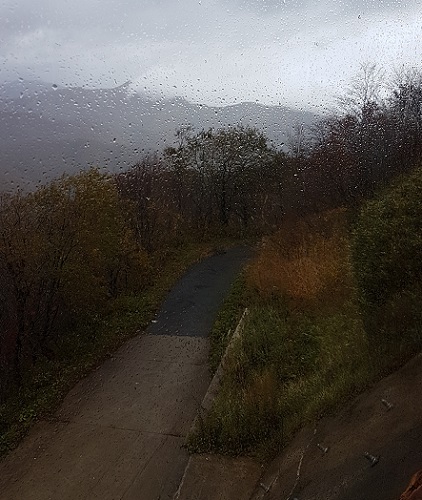 Visitors are invited to place a sticker on a world map. The second Canadian to visit and the only one from Vancouver Island, I embellish mine a little. 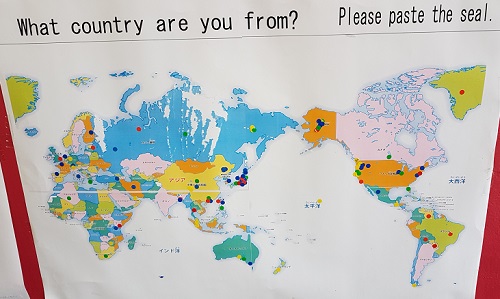 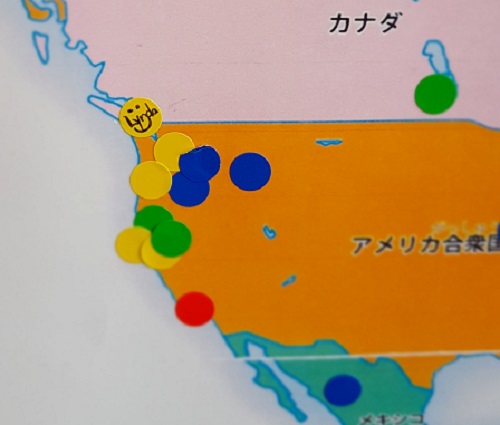 On the way back we pause at Kamoshika a Nihonshu (sake) purveyor’s shop where I sample several local varieties. Derrick is driving and cannot partake as Japan has 0% tolerance for alcohol consumption for drivers. So I buy him a bottle of the one I like best. 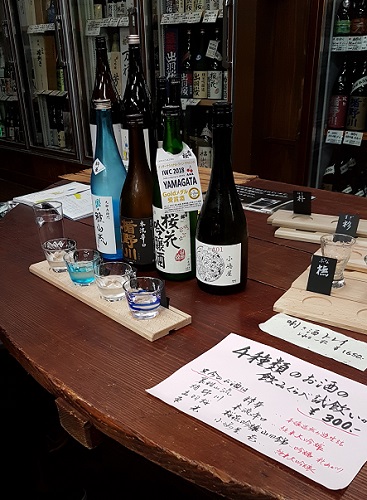 Then we are off to Kameoka Monju, a mountain temple where students pray for success in exams. I don’t normally pray in these situations, but this time I  ask for the right spirit and success in my ikebana studies. Who knows who might be listening and feeling magnanimous when it comes to the gods? 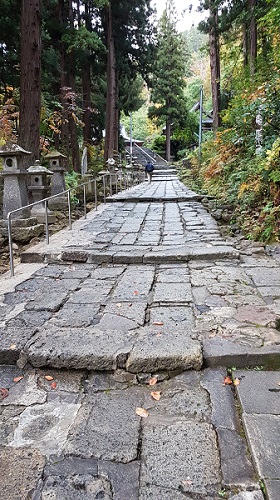 After pausing for a tasty soba lunch at Konaya back in Yonezawa we carry on to Mahoroba Inishie-no-Sato Historical Park in neighbouring Takahata city. Nestled against the hills is a small pagoda, part of Akutsu Hachiman Jinja (a shrine). 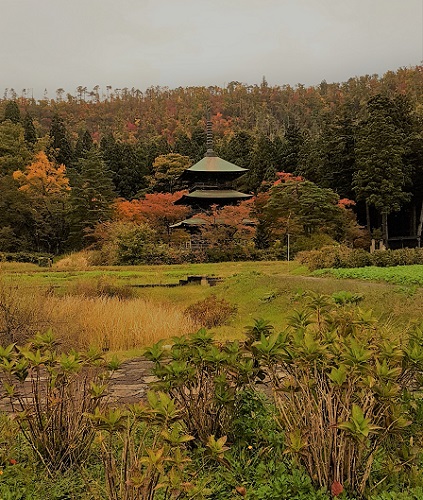 Nearby, two Jomon period huts and a koruna (burial mound), reconstructions on the original site, allow us a glimpse into the lives of prehistoric peoples living in that area of Japan. 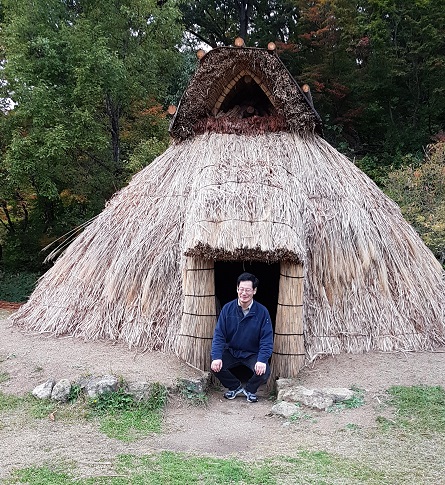 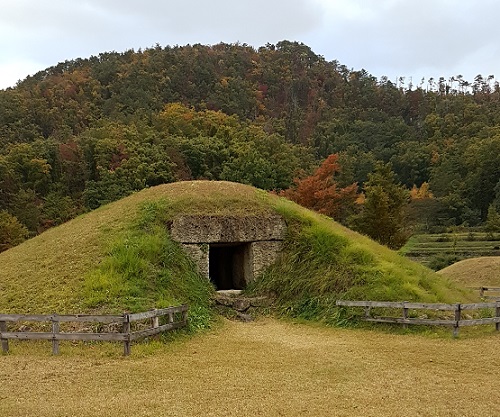 Sunday morning after a brief stop at Starbucks (as no indie shops were open at 9:30 AM) we drive over to Fukutoku Bishamonten a small, 1200 year-old temple with a lovely rustic garden. 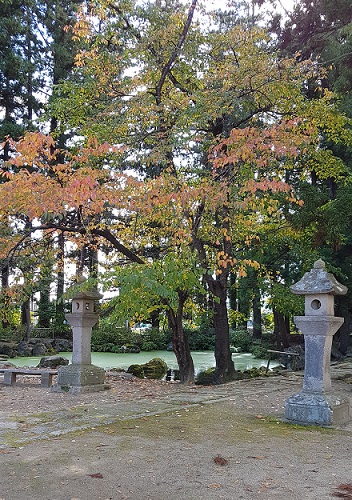 Then we are off to Yoneori Kaikan, the Yonezawa Textiles Association Hall (which is not to be confused with the separate Yonezawa Historical Textiles Museum).  Yoneori Kaikan is still operating. Alas, who knows for how long?

Yonezawa was once renowned for its silk industry. However, the decline in demand for high quality fabrics and fewer people wearing kimono has forced many establishments to close over the years. 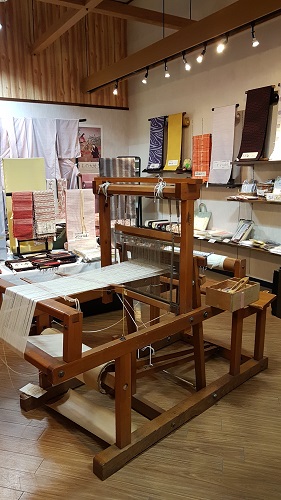 Others hang on trying to reinvent themselves to suit the times, offering a variety of small items they hope will appeal to the tourist trade. What to do when the prestigious work for which you and generations before you have devoted a lifetime honing skills and artistic vision no longer has commercial or other value? Carry on under a cloud of despair knowing that it dies with you? Difficult questions with more than difficult answers.

Then it is off to Onogawa, a mountain onsen (hot springs) town up winding roads lined with newly harvested rice fields, small apple orchards, heavily laden persimmon trees, and kitchen gardens nestled into the red and gold hills. We don’t bathe but wander around through shops and buy a few things before heading back to the city for lunch. 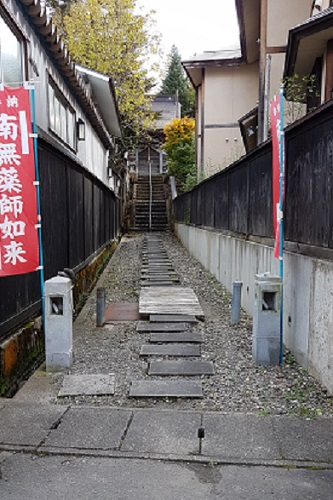 All too soon it is time for my train and speedy, grateful goodbyes to my thoughtful, generous friend who planned a comprehensive view of his city and surrounding areas for me, and invited me to join his friends for Halloween revelry.

Trains have a way of inducing a hypnotic state. On the crowded Ginza Line back toward my home in Gaiemmae, I stood half asleep with a knee against my spinner suitcase so that it wouldn’t roll away. Then my forearm bumped someone. I turned to offer the requisite sumimasen (excuse me, sorry) which nearly left my lips. Luckily it didn’t. I had almost apologized to the handle of my suitcase.

This entry was posted in Japan, Travel & Culture, This & That and tagged A weekeknd in Yonezawa. Bookmark the permalink.