Akita: The True North of Japan

Posted on November 12, 2018 by Lynda Philippsen

Sometimes an idea calls me. When it does, I like to say yes. 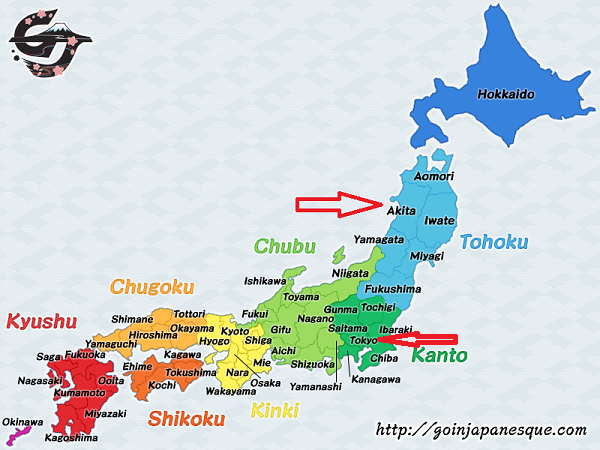 Ordinarily, I wouldn’t choose to hit the northern regions of Japan in a single day. I’d prefer a leisurely journey with time to savour the local atmosphere and discover off the beaten track surprises.

Even when presented with the unexpected option to cash in about $400 worth of free train fare, some might think a 14-hour day to see two galleries a touch insane. However by seizing the serendipitous opportunity, I experienced incomparable, time-limited exhibits and stunning architecture which I may never have a second opportunity to view in my lifetime.

Then during the long haul in the dark from Akita back to Tokyo, I had four hours to shape my scribbled notes from the adventures in Yonezawa, Atami and Akita into rough drafts.

Though showing a significant number of the Western-style works of Tsuguharu Foujita, a 20th century painter, the main feature of the exhibit is his massive mural titled “Events of Akita.”

According to the very limited information available in English, after numerous trips to Akita to gather information, Foujita created the work 1937 using oil. The panels depict seasonal events in Tomachi, a merchant district in Akita City.

The vibrantly coloured scenes depict various seasonal festivals at local shrines as well social life and commerce in the town’s winter landscape. Celebration, prayer, entertainment and livelihood, stand alongside oil derricks, bags of rice, lumber and a sake barrel—Akita’s primary industries. A symbolic rendering of Korogibashi Bridge near the site of the ancient Akita Castle separates the festive from the mundane scenes, and alludes to Akita’s long history.

There is a ban on photography at the museum. A few clandestine online shots fail to reveal the work to the standard that it deserves. Reduced to a few pixels it’s hard to imagine it towering above you with any sort of power and grandeur. However, for anyone dying for a look, I found a link to a copyrighted image on the Masakichi Hirano Art Foundation website (which I will assume lends it some legitimacy). 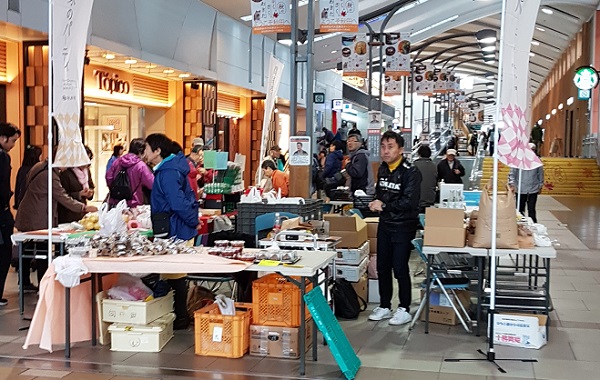 Though I was somewhat disappointed not to be able to share images of this massive and captivating work, I was delighted to find the “Events of Akita” still thriving on the street. Approaching the museum from the station it was Akita’s centuries-old business as usual. 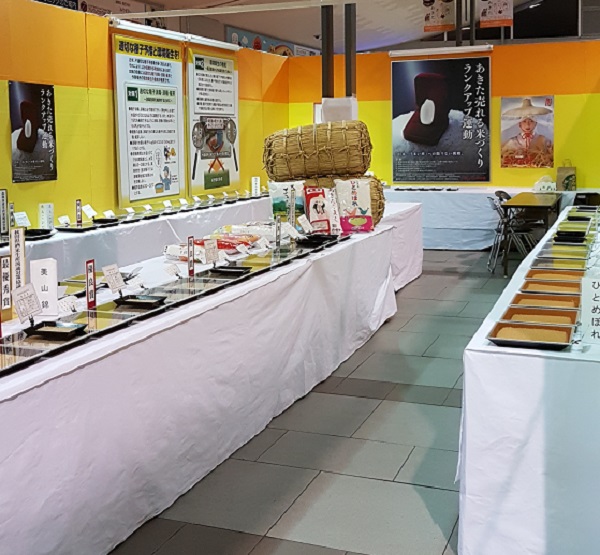 Along the promenade from Akita Station the association for Creative Farmers’ Action held its annual week-long festival promoting local produce and merchandise. Shop owners called irashaimase from their doorways. Packs of school kids hung about. Mothers urged their children along. Housewives carried on with their shopping while street artists performed.

Though it was closed for the day when I got to it, an extensive display featured numerous samples of local rice. The poster on the end wall featured a single grain  as if it were a fine jewel (which indeed it is). 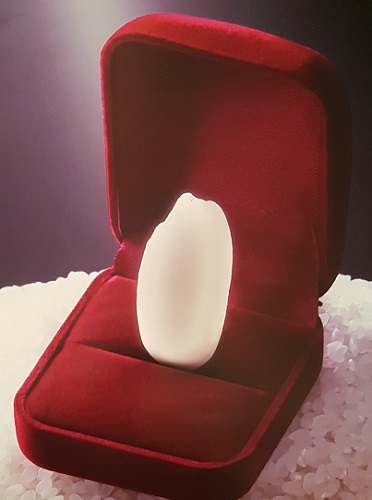 Though few outside Japan may remember this point in their history lessons, Japan’s currency (its equivalent of the gold standard) was once measured and paid not in coin but in rice. 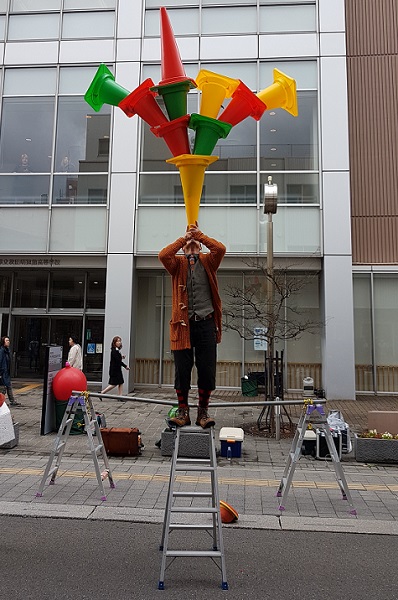 Alas, due to blustery winds this poor fellow kept having his pylons blown off before he could climb to the top rung, balance them to his chin, and then his head. However, to the delight of the spectators after many disappointing starts he persevered long enough to succeed. All clowning aside, perhaps an apposite reminder for us all.

The Akita Senshu Museum of Art

Described as a museum which holds distinctive exhibitions of outstanding works renowned worldwide as well as from within Japan, a number of artists exhibited here have connections to Akita. There is also a memorial gallery for Okada Kenzo who is well-regarded abroad.

Though I had no idea of the marvel I was about to view, the main exhibit during my visit featured the large-scale works of Senju Hiroshi an artist who works using traditional Japanese methods and materials in original ways. Again, most of the halls in this exhibit do not permit photos. Just as well. Amateur shots of exhibition items rarely qualify as splendid things. 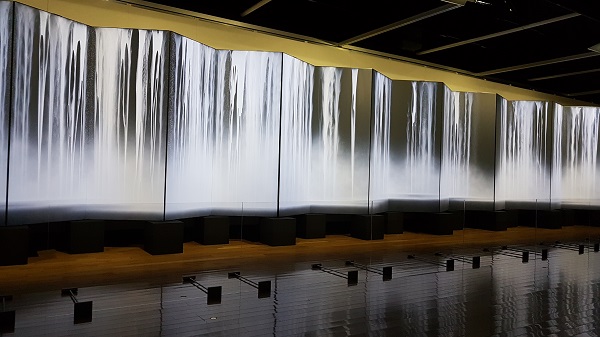 However, for the one room which does permit photography, the mesmerizing way that alternating black and white lighting plays over special paints used in Senju Hiroshi’s Day Falls/Night Falls” painting might provide a glimpse of the glory that imbues these works. 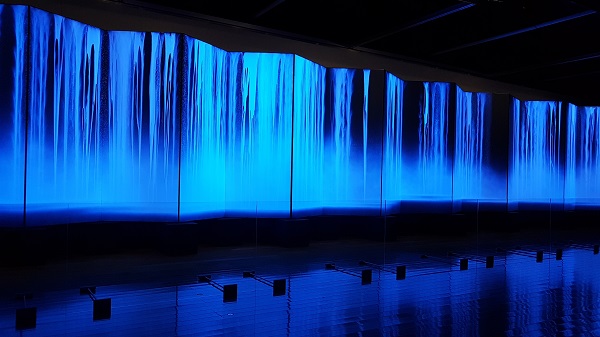 Words fail the impact of Senju’s screen and wall paintings of cliffs and waterfalls commissioned from him for Kongobuji Temple at Koyosan, a sacred Buddhist site. Though nothing can touch the scale of the works in a darkened room, numerous compelling images of his waterfall and cliff paintings as well as other works can be found online.

During the exhibit, a video documentary of Senju’s methods chronicles some of the process to achieve what the artist has described as “the culmination of his career to date.”

Fortunately, there is more English exposition throughout this exhibit. I am particularly struck by the details of Senju’s transcendence practice and his shaman-like ability to open to altered states of perception. His works carry the power of those states of ecstasy and Senju’s deeply spiritual experience of beauty. As such they are incredibly moving.

Yes, after five days of back to back travel and numerous shattering wonders to behold, my brief moment in Akita meant a long ride for a brief experience. Still its intensity was such that it’s one I won’t forget or regret.