You know you are not in a good place when you’ve got the undertaker on speed dial.

My beautiful and gifted and occasionally exasperating mother was admitted to ER on April 20. On May 1 she went into hospice care. On May 9 she died.

Her charm, creativity, sense of humour and gentle spirit endeared her to others all her life, even during her final days in hospital and hospice. An enthusiastic singer, artisan and skilled painter, her family was (in her words) “what gave me the most joy in life.” 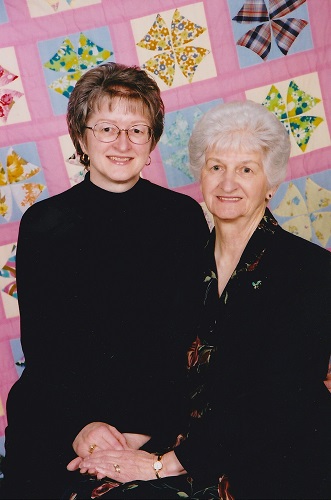 2003 Mom and I with the quilt she made from the remnants of our 1960s home-sewn clothing.

Ours was a complex relationship. Often like a falconer and his bird.

When I first began to work as a freelance writer she (and my father, too) was inordinately anxious about what I would say. There was a whole lot of not-saying in our house–not uncommon in Mennonite culture. Differences and hostilities cannot be open, but lurk underground and nip at one’s Achilles heel.

At the time Camilla (still) Parker-Bowles was in headlines reading horse face. My mother extracted a promise that I would never ever call anyone horse face in anything I would write. No problem. I promised. However, Mother overlooked that a horse has another end. I had wiggle-room.  But of course, I didn’t say so.

So far I’ve never had to play the other-end card. But I could. Just sayin’.