Rambling a Little Off the Usual Track

This morning I attended a New York Metropolitan Opera performance of Tannhäuser broadcast in HD at my local Cineplex Odeon. Fabulous music. The story, however, has not stood the test of time. Probably because there isn’t much to the conflict. That and periods of instrumental music devoid of any stage action to develop the plot. It’s in the music which is wicked-gorgeous but long. Well, it is Wagner, but he’s not the only one to write that way. 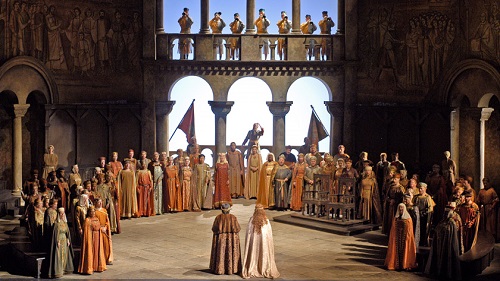 Tannhäuser (a mortal) decides he no longer wishes to live in carnal pleasure with Venus among the gods even though she adores him. He misses church bells  and wants to suffer pain. (Which only goes to show the idiot human condition: never satisfied with a good thing.) So he returns to earth to live among his old, noble acquaintances (good, upright medieval Germans who reminded me a lot of church councils I have known) who damn him for his former life/lust and kick him out.

There’s some love interest from a woman named Elizabeth (who prays a lot and eventually expires just before Tannhäuser returns too late for her to witness his redemption.) But there’s not much to enthrall you there. Redemption isn’t nearly as interesting as eternal torment. Other great operatic stories–Onegin comes to mind–remain much more gripping.

For high drama there has to be the anguish of unbearable choices in the pursuit or rejection of love, even when the price is death. Sopranos in particular love it when they get an operatic role in which they don’t have to die.

It’s the mezzo who lives. Which, if you think about it, means that second place really isn’t for losers. They win. Like big-horned sheep. While the two who are vying for alpha are locked up and snorting, the little guys move in on the booty. (This is true.) As a result big horned sheep are slowly selecting in favour of smaller horns. Size isn’t everything. Well, at least not when it comes to horns. Speed and cunning are good too. Which is slight digression from opera, but you were warned.

This entry was posted in Reviews, This & That. Bookmark the permalink.