Small Successes in My Ikebana Studies in Tokyo 4

Posted on December 8, 2018 by Lynda Philippsen

In an arrangement for a low table or the floor, the objective is to create beautiful line and a composition which is attractive from any viewpoint. Since I got pushback in an earlier lesson for choosing dark colours, for this enterprise I decided to go boldly. 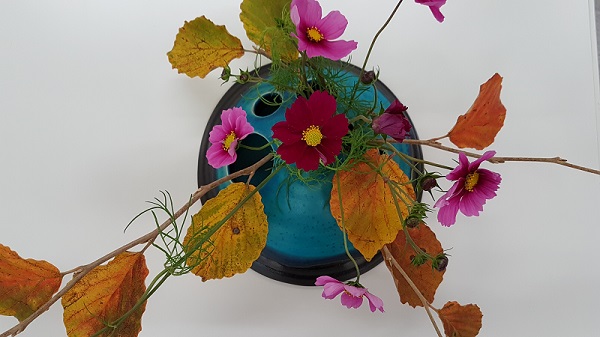 I chose the container for its colour and the fact that it could accommodate a kenzan (spiky frog) to hold the cosmos and the branches. The five holes in the vase also allowed me access to the kenzan from multiple points making it easier to create an all-around design and easily hide most of the kenzan under the ceramic without needing many leaves to do the job.

The red, gold, orange and green tones in the leaves together with the magenta and burgundy in the flowers hit every segment of the color wheel. Sensei’s verdict? Omedeto!  (Congratulations.) All points excellent.

Though in ikebana it doesn’t always count as success to think so, I liked it too. For example, I liked the rich and rusty tones of an earlier work more than sensei did. Sometimes it’s a matter of preference and not necessarily rightness. Other times it’s failing to hit the execution of the theme even though the arrangement may look fantastic to the untrained eye.

I’m constantly impressed by how the top-level master teachers assess each student’s work, then remove a leaf or shift the kenzan or add a small branch and create something splendid where originally there was something very good.

This entry was posted in Ikebana, Japan, Travel & Culture, This & That and tagged an arrangement for a low table or the floor, Studying Sogetsu Ikebana in Tokyo, the objective is to create beautiful line and a composition which is attractive from any viewpoint.. Bookmark the permalink.