Small Successes in My Ikebana Studies in Tokyo 5

Posted on December 16, 2018 by Lynda Philippsen 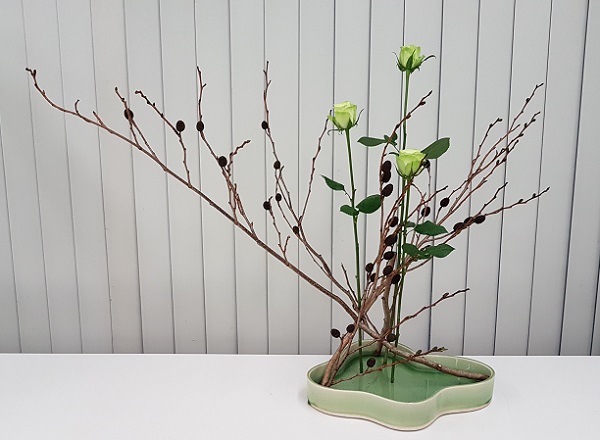 The morning lesson went badly. Without a doubt it had to be the worst arrangement I have ever made. And that’s not coming from inner Tiger-mom. That’s straight from me.

I’d been rather excited by the prospect as I had by great good fortune caught pruners culling dead bamboo from the grove leading up to Baisoin, the small Buddhist temple I passed each day on the way to Sogetsu Kaikan.

I’d begged branches from them and thought all would be well after that bit of luck. I wouldn’t have to purchase additional branches in order to create a framework on which to execute the design, one that hangs on the wall.

The delicate bamboo was a gorgeous gold and a pleasure to touch. However, nothing clicked. The mess I’d made of the design was nothing less than deeply embarrassing. Plus a terrible waste of the exquisite bamboo. Sigh.

When he arrived at my station to evaluate my effort as the whole room watched, I asked the teacher-interpreter to apologize to sensei for wasting his time. However, she refused to speak. He stood silent a long time while I cringed. Silence can be the worst condemnation.

Eventually he asked whether the eucalyptus I had used was fresh or dry. I answered that it was fresh now (a requirement of the lesson) but would dry nicely. Eventually he said dai jobu desu and moved on.

Dai jobu desu can mean many things. However, in this case it was used in the way that you’d encourage a kid who’d wobbled a half a meter before falling off her bicycle. You say no problem, it’s fine when it’s no success. Plus, you know it won’t be the only tumble she’ll take before she eventually gets the hang of it. Still, for the one who took the fall it smarts a little.

On Tuesdays and Thursdays I regularly took two lessons in one day. Next in the course sequence I had another challenging lesson. Initially I had thought to defer the tricky one to the next day, and swap it with a freestyle one that is more flexible as I am always sharper in the morning. However, following this fiasco I figured I might as well do the difficult one after lunch. That way, if it bombed I would ruin a single day rather than two.

4.18 Branches in a Suiban Without Kenzan is an arrangement in which the branches must balance against each other and the sides of the container and hold their position.  The flowers must stand upright on their bases between the branches without a pin frog to hold them in place. Students (as well as demonstrating teachers) work with assistants to hold the branches during the assembly of the design. Wire is also used to secure the branches to each other and keep them from slipping out of position.

Being first in line for the afternoon registration, I was able to claim the single bunch of stunning green roses which had caught my eye. Those matched a softly curved suiban I’d noticed earlier and would be a good weight to balance among the alder branches. I’d been watching other students use those with their striking cones all week and was keen to try them.

Together with one of the assistants who helped me to hold the branches steady and wire them together, I set to work. Once the branches held their position I cut the roses straight across and set them in place on their stems.  Then as I removed minor branches and a few cones in order to create better lines and spaces, I discovered that alder cones drop little black seeds into the water when jostled. In ikebana, water is treated as a design element. As such it should always be beautifully clear in order to reveal the bottom of the container, reflect the foliage or create a sense of space.

Fishing those bits out without knocking the whole structure off balance or more junk into the water wasn’t easy. That’s the major reason why, after standing back to consider the design elements, I didn’t remove a few more cones and branches. Too risky. Too late in the lesson period to fix it if the house of cards collapsed. Instead, I gambled that the detail might go unnoticed during the evaluation.

In every other respect the result was spectacular even if I said so myself. How gratifying to achieve this quiet, simple elegance after the morning’s miserable flop. Inner Tiger-mom gave me an A-plus, and we gave each other an inner high five while other students gathered around to admire the result.

In contrast to his earlier silence, sensei couldn’t stop talking about this arrangement, especially since it was the first one of this type I had ever attempted. He pointed out its various merits to the class. Only two wires! Wonderful container colour and harmony with the unusual roses. Lovely perpendicular lines of the roses. Excellent choice of branches for movement and colour. Kire! Beautiful! Omedeto! Congratulations. 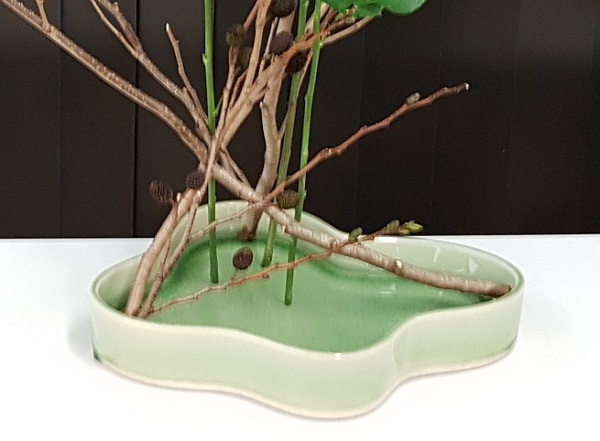 He didn’t mention the stunningly clean water. However, he also didn’t point out the small swamp in the suiban of another student behind me who was working on the same lesson. After I noted that, inner Tiger-mom gave me an upgrade to Super A-plus.

Alas, from high to heartbreak, the work had to be struck down moments after sensei finished praising it. Sigh.

This entry was posted in Ikebana, Japan, Travel & Culture, This & That and tagged Studying Sogetsu Ikebana in Tokyo. Bookmark the permalink.