A Kitchen Not Quite Fully Equipped

Posted on November 18, 2017 by Lynda Philippsen

When I undertook to live in Tokyo for three months I understood there would be new things to figure out. I knew I’d have no idea how anything worked except as outlined in the big blue binder of rules and pages of instructions (that do and sometimes don’t interpret the Japanese directions). 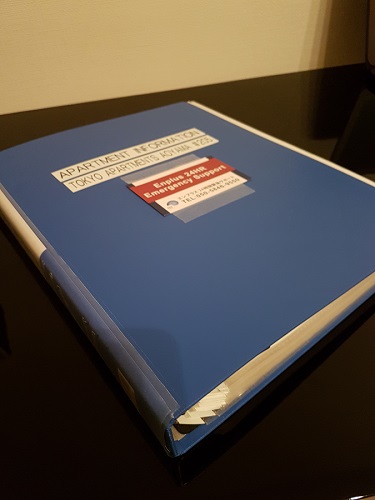 I knew there would be no maid to refresh the room and replenish the towels. I am the housekeeper and laundress. That’s fine by me. I’m not keen on strangers coming in to tidy up.

However, the apartment which was promoted as having all the amenities wasn’t quite fully equipped. I had expected that my digs would match other very workable housekeeping suites and Airbnb arrangements I’ve enjoyed in the past.

While my Tokyo apartment is homey and agreeable in most respects, when it comes to the kitchen, my desire to cook at home some of the time has been challenged in ways I hadn’t expected. 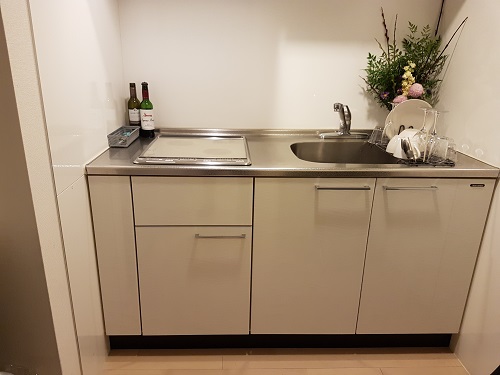 On arrival I found a skeletal supply of dishes, a rice cooker, pots, a frying pan, a stove-top kettle and cutlery. Two beer glasses but no wine glasses. Tea cups but no tea pot. Two small rice bowls, but no bowl large enough to hold an udon or nabe-style soup or to microwave oatmeal. No vegetable peeler or paring knife. 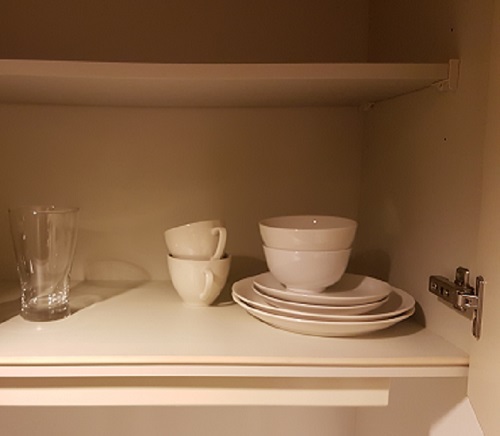 Kitchen appliances include a microwave oven on top of a small refrigerator, an electric kettle as well as an electric coffee maker, both with short cords and no place to plug in either one other than a receptacle placed near the ceiling. As far as I know, cooking appliances don’t perform well while dangling from cords anywhere in the world; not even in Japan where, I concede, things work somewhat differently than elsewhere.

I could place an appliance on the washing machine situated in the bathroom across the hall. Beside it is a plug; however, the machine’s top is sloped and that’s not an option. But even considering cooking in the bathroom shows that I am willing to work outside boxes to deal with things.

Eventually (because I moved the fridge to make more room to organize the recycling) I discovered that there were three additional receptacles on the plug running the fridge. 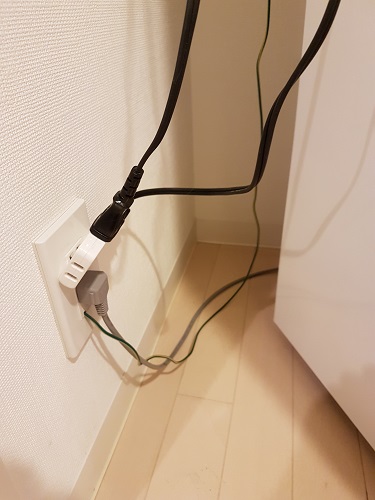 After I shifted the microwave farther back, I could squeeze the electric kettle in front of it. The cord reaches. Barely. However, if I wish to open the microwave, I must move the kettle. Though I’m not thrilled to boil water in a spot where it might easily pour down over me, it works. 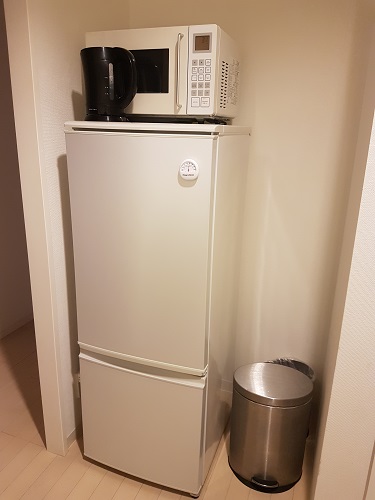 Where I would put a rice cooker in such a configuration is beyond me. Rice cookers can do much more than cook rice, and I had thought to use mine to braise meals on cold winter nights. However, the only remaining spot for it is on top of the microwave.

Sorry, but I’m not about to place more appliances containing scalding liquids at shoulder height or higher. In the homes of Japanese friends stacked appliances are common, but those are generally placed in shelving units designed for that purpose (which explains the plug-in near the ceiling). Alas, that key piece of furniture is missing from my kitchen. 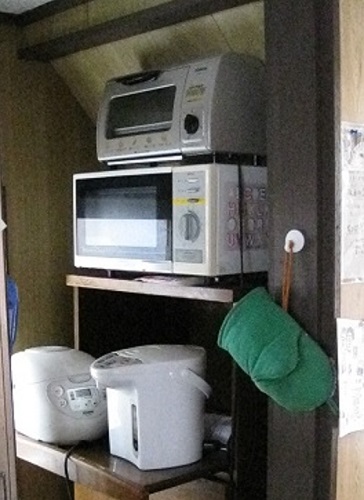 As I’ve said, I had expected that things would be different and would require adjustments. However, quite logically, I had also expected the convenience of having full use of all of the appliances provided as well as use of them simultaneously.

Even though the glass stove top must act as a work station, and I would have to get everything mise en place without containers for the mise or much place, I had hoped to cook at home semi-regularly.

When I explained my inability to use the appliances simultaneously to the rental company and asked whether they might provide something—even a small table–to hold them, they refused. Instead, I was advised to purchase an extension cord. (And run it to a hot appliance I’d place where? On the floor? In the sink? On the stove top? On a plastic chair?)

I was also told that most of their customers are single males and they have not received this complaint before. After several (very cordial) email back and forth, the company admitted that I was inconvenienced and that they believed the solution I suggested was the best way to improve the situation.

Still, they remained firm in their position that if they provided me with any additional furnishings, they would have to supply the same furniture to all their suites across Tokyo.

Of course they wouldn’t have to do that. They could decide to provide exceptional customer service by doing something extra for one client. It would take less than an hour to fix it.

Some companies might do exactly that. This one has simply chosen a not to shoganai do anything much less something different. Yokoso Japan. In the end, I agreed to disagree with them and find their response disagreeable. Bygones.

Though I’m determined to see it as an opportunity for new discoveries, sourcing high-quality prepared food has been an unnecessary and unwelcome nuisance. Somewhat hit and miss. 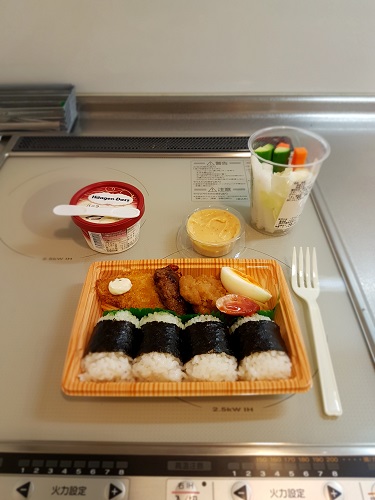 Three weeks in I’ve found inexpensive wine glasses and a few kitchen tools I don’t mind leaving behind. I still don’t have a tea pot as I haven’t found one under $30. Mercifully, there were a number of items I was wise enough to bring with me exactly because I didn’t want the hassle of hunting them down on arrival.

I still haven’t cooked anything except oatmeal in the microwave. Dinner, when I have it at home, is usually a ploughman’s style plate of bread, eggs, cheese and charcuterie with salad. For now, I have to choose my battles as it’s cumbersome as well as daunting to deal with multiple systems about which I am (mostly) clueless at the same time.

Remembering that being creative (even creatively solving unwanted problems) is fun, I managed a few kitchen and housekeeping hacks which help to mitigate the rest. One, I can boil fresh eggs in the electric kettle. That works brilliantly and I don’t have to give up valuable counter space by using the stove.

Two, I found a drain rack which stretches across the waste-of-space sink and increases my counter surface by about 40%. On it are some of the additions I’ve made–the larger bowl for cooking oatmeal and ($1.50 each) wine glasses. 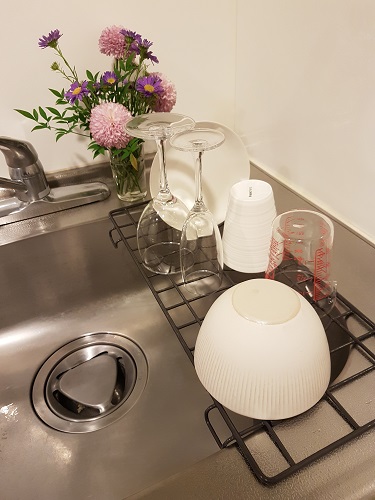 Three, to avoid hauling out the vacuum cleaner for every dust bunny frolicking on the hardwood floors, I discovered a Swiffer-style mop the size of a chalk board eraser with a 60 cm handle. It looks like a toy but works splendidly (though I can’t imagine a tall person being a huge fan).

Yesterday, I learned of another department store which provides inexpensive items, including Christmas trees in Shibuya, which is only two stations away. With any luck I’ll also find that teapot.

This entry was posted in Japan, Travel & Culture, Reviews and tagged Disappointed in kitchen facilities, Enplus not willing to do extra, Tokyo Apartments kitchen amenities. Bookmark the permalink.