Posted on November 10, 2014 by Lynda Philippsen

On my way to and from my hotel to Tokyo’s Metro line, I pass a supermarket. Outside is a large bicycle parkade. Here young mothers with a couple of kids (usually without helmets) strapped on front and back, flawlessly coiffed matrons, and elderly obaasans pedal in, park and begin their shopping.

Tending the lot is a full-time, uniformed white-gloved attendant. Likely retired from his previous position as a company man, he now spends his entire day fussing over the bicycles, moving them a millimeter or two in one direction then another millimeter or two back until the shoppers return, mount and push off. 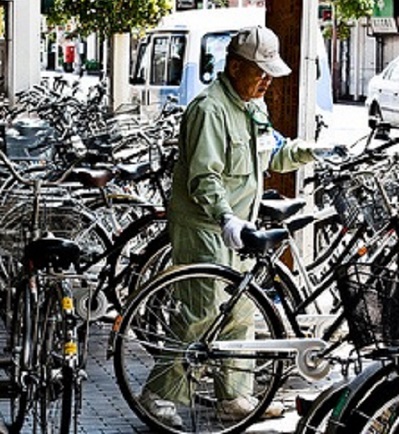 Like a life-long craftsman patiently absorbed in every step of creating his wares, the attendant’s obsessive-compulsive traits are more highly prized—even cultivated and venerated—in Japan. Anywhere else his meticulous attention might well be classified as a disorder requiring serious pharmaceutical intervention.

I never tire of watching him. I smile with quiet joy to find a kindred spirit—a member of my tribe. A lucky one blessed to have found a niche which perfectly suits his gift.