Posted on November 23, 2014 by Lynda Philippsen

A friend whose visit to Tokyo overlaps my own suggests that we meet. He wants to show me some of his favourite haunts of bygone days before he became a permanent resident in Canada.

In front of the Hard Rock Café in Ueno Station he greets me with a huge Canadian-style hug, and numerous black heads swivel hard. What is this Japanese guy doing? Public displays of affection are more than rare here.

Unlike the other gentlemen his age bundled into suits and coats (as it is now autumn), he wears a short-sleeved, open-necked polo shirt. Even so he frequently mops his brow with his handkerchief. Acclimatized to the temperate Pacific Northwest, Tokyo’s mid-November temperatures feel like a sticky summer day to both of us.

First on our list of spots to visit is  Ameya-yokocho Market (or  Ameyoko) along the eastern side of Ueno Station. Some claim the name originates from Ame (shortened from American) and yokocho, the Japanese word for alley. This refers to its history as a district once offering black market American goods. Others suggest the root is in ameya or sweet shop, as the area was also renowned for its candies and sweets. 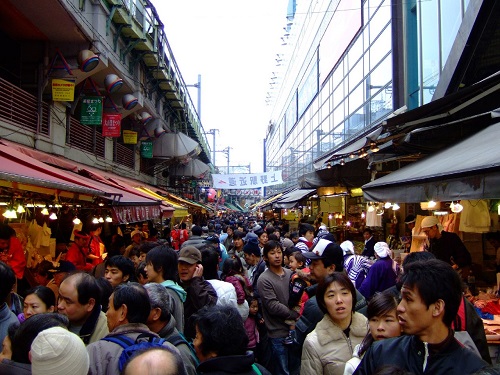 Whatever the origins of the name, the bustling open-air market is a warren of stalls crammed together. Fishmongers almost on top of clothing stalls, restaurants alongside high-ticket importers, sushi joints and dry goods jumble together in ramshackle chaos. 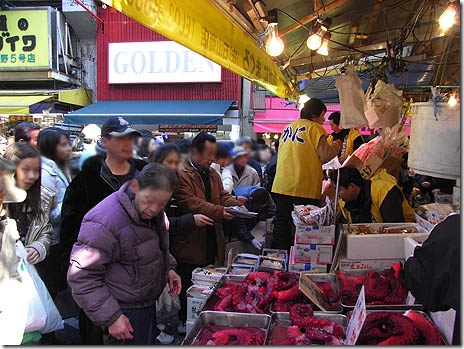 Over the mass of shoppers the voices of numerous vendors knit into a fugue that rivals a massive orchestra tuning up.

Into this cacophony we wander aimlessly. We are not shopping, merely looking, though the hawkers do their best to entice us with their specialties. I hardly know what to look at in the confusion and stimulation-overload.

At my side my friend describes the numerous changes he notices after his long absence. The one constant of life—that familiar refrain: For better or worse, how different things are now than what they once were. Indeed.