Posted on November 7, 2017 by Lynda Philippsen 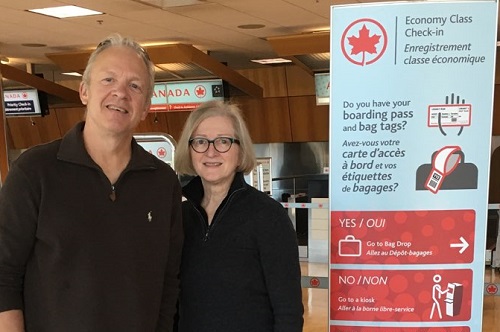 At Victoria Airport with my brother Norm. Photo credit to Kellie Hudson.

Every morning I pass through a small, charming green space located a few steps east of my Tokyo apartment building. Walkways of concrete slabs meander in various directions through the small grove. 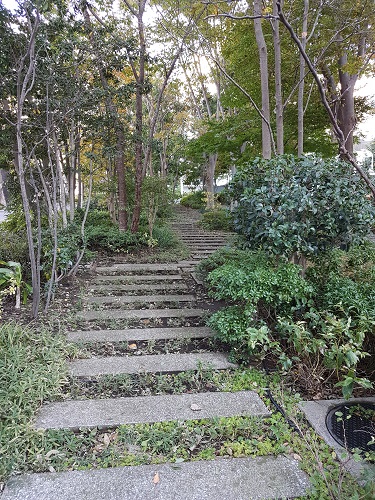 Green grove outside my apartment.

Across the street is a schoolyard as well as a graveyard. 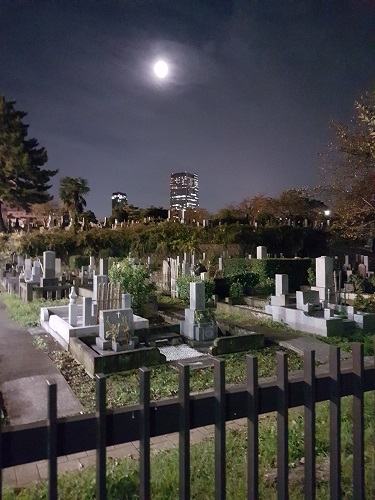 Graveyard across the street near my apartment

I chuckle as stroll under the canopy, for I realize this rather sums up where I have been, where I am, and where I am going. Mono no aware. You don’t always need cherry blossoms to put a sharp focus on the evanescence of things.

Shortly after my arrival at Nikko House, a glossy raven landed on the balcony railing. I’d heard him earlier as he did a fly past, but I’d never seen one a mere three meters away. As he landed I froze in place, held his gaze and mentally thanked him for dropping by.

He gave me a long discerning look, cocked his head from side to side and seemed to ask, “And who are you?” Then he lifted his beak as if to say, “Humph! I guess you’ll do. Welcome to our neighbourhood.” As quickly as he landed he lifted off and was gone.

After a bliss-filled journey and arrival at my apartment without mishap, irritation, or lost luggage, the first seven days have been riddled with energy-sucking technical and additional problems. (I may or may not get to those in a future post.)

All were time-consuming glitches which needed to be resolved. Complications I didn’t create. Except for accidentally setting off the emergency security alarm on my first evening. I did that. However, that was the easiest one to handle. I could not turn it off, but knew that eventually someone in a uniform would show up and do it. Mondai arimasen. No problem. I kept on unpacking.

Sure enough, after raven, on my first night in Tokyo, a good looking gentleman knocked on my door to ascertain my security. How twice blessed can a person be? The heck with the rent an elderly man service in this city, eh? (You can rent anything in Tokyo.) I can simply push “the wrong button” on my security panel and one will come to my door for free. 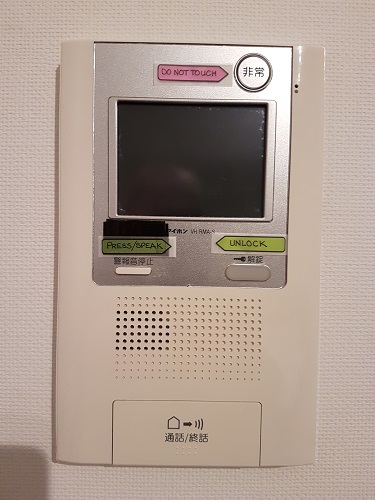 As I said to a friend, the transition so far has been filled with glorious moments, splendid experiences and a feeling of being quite at home from the moment I landed. However, it’s been much like going on a great date with the wrong guy. It might have been so much more fun. 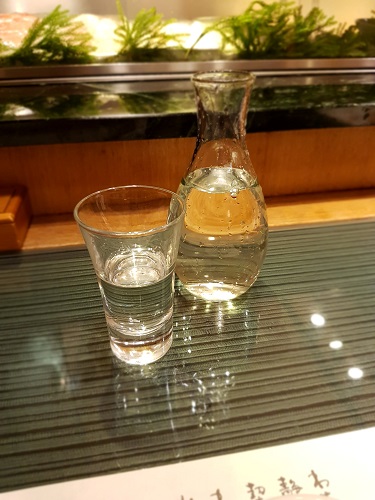 Reward for patience under duress.

Although each problem popping up like an over-eager Whack-a-Mole has also been an opportunity,  so far it’s eaten up the time I would have preferred to get more rest and find the hidden gems of my new neighbourhood. But now I’m back on track. More to follow. Soon.

This entry was posted in Japan, Travel & Culture and tagged First Tokyo days, Getting settled in Tokyo, My Tokyo adventure begins. Bookmark the permalink.

2 Responses to First Days in Tokyo